Busy week
Last Sunday we went to Blood Source recognition lunch in Sacramento. Quite inspirational and food was pretty good. Picked up a couple of awards for reaching 15 gallon and 20 gallon levels last year. Before we went, on a whim, I looked at the CarMax web site and printed out reports on a couple of Jeep Libertys they had. On the way back from Sacramento I suggested we stop by and look at them. Surprised mom as we had not been talking about a new car at all. Found both cars on the lot and drove one. Not bad. Had the drive train features I wanted (true 4WD with transfer case). A bit cramped to sit in but only when you think about it (no extra space to move in). We went home to think and research some. While researching I came accross Suzuki Grand Vitara which also had required drive train. CarMax had three of those so we went back Monday to look at those. Much more room. Nice drive. Two years newer (2008). Went home to think and research some more. Tuesday we went back a third time - and bought our first car in fifteen years. I think we will like it. It is smaller and less peppy than the Explorer but we will still have that to fall back on if needed. Just have to take less with us. It is 1000 pounds lighter than the Explorer so the Carbus will like it. Mom has warmed to it very quickly. She hasn't driven the Explorer since she drove the Suzuki off the lot. 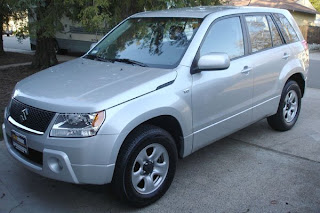 Ordered trailer hitch and towing/breaking package so we can get it all installed for trip.

Thursday and Friday I did taxes at Vet. Hall and Senior Center.

Today I built a mount for the Wilson antenna to hook it to the Carbus awning support. Should be firm enough to use in motion if we want to. Still working on laptop mount for Suzuki.