Morning started foggy but burned off by the time we left.  Last time we will see cool weather for a while.

Took about an hour and a half to get to Salem.  Noticeably warmer even half way there.  Drove the carbus through downtown Salem to Costco on the southern end.  Filled the carbus with gas and did some shopping.  Then to AAA for some maps.

After AAA we drove about a mile to Honeywood Winery.  We go there every time we go through Salem.  That means every 10-15 years.  It is the oldest winery in Oregon.  They make a wide variety of wines including a large number of fruit wines.  Not many wineries make fruit wines and these people do it well. I have not tasted one of their wines that I did not like.  We tasted six different wines and purchased several bottles which we will save for special occasions.

Another twenty miles and we reached Silver Spur RV Park in Silverton.  Nice park.  Looks new.  Moderately full.  Will be a good base for our next three days activities.

Another late start day.  Nothing planned to see or do.  Probably a good thing.  The day started foggy.  It cleared where we are but the coast stayed gray and cold and breezy.  We lucked out yesterday.

We went to glass studio to retrieve our bowl.  Turned out pretty well. 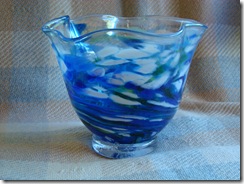 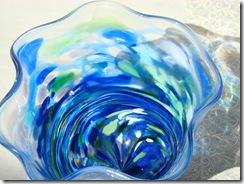 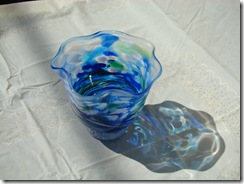 It was fun to do.

The rest of the day was slow.  Spent some time refreshing ourselves on our video cameras for the wedding we will attend this weekend.

Tomorrow we head inland where it is quite warm lately.

Woke up to sunshine!  The river view was very nice. 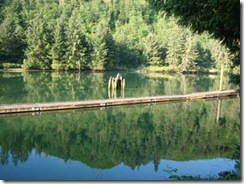 Great weather means great time to take a hike.  While Sue made lunch I printed out data sheets on 18 geocaches.  Two of them were near our hiking objective.  We drove ten miles east into the hills southeast of Lincoln City.  The forest service describes the road as ‘single lane with turnouts’.  Pretty good description.  Narrow road through a rain forest.  One entry on the log for one of the  geocaches was by a guy who turned around because the road spooked him.  We thought it was beautiful.  Thick, green, lush foliage and sunshine.  When we got to the parking lot it was already half full.  We hiked/walked about a mile and a quarter through beautiful forest to Drift Creek Falls. Don’t know the name of this purple flowered plant but they were everywhere. 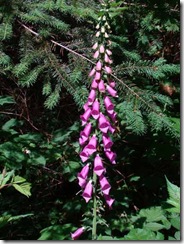 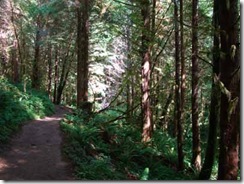 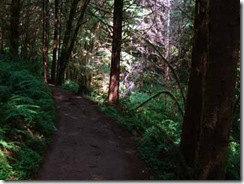 There in the middle of nowhere is a suspension bridge across the creek. 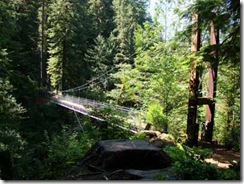 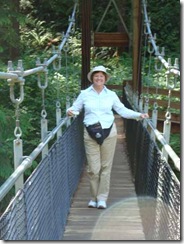 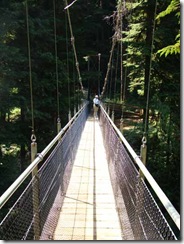 The falls are right next to the bridge and you have to go to the middle of the bridge to see them. 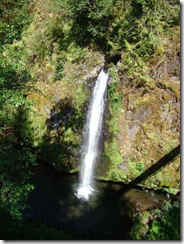 There is a trail on the other side of the bridge that goes down to the creek to view the bridge and falls from below. 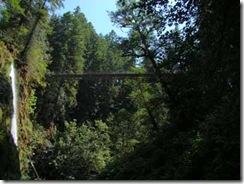 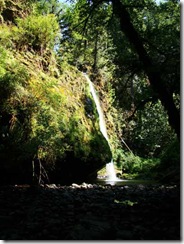 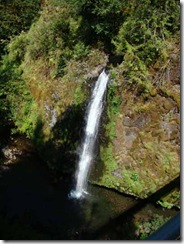 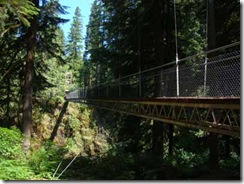 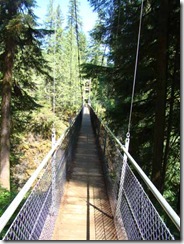 The cache is near the bridge and we snagged it easily.  On our walk to the falls we saw three groups of two people hiking back out and we were alone during our time there.  On our way back to the parking lot we passed over 50 people going down including two wheel chairs (the trail is wide enough but is dirt, uneven, and was very muddy in a lot of places).  Our timing was perfect.  The lot was overflowing.  Trip back down the road was just as pretty.  The entire time on the road we only passed one car just before we were back to the highway.  Pretty amazing considering the number of people we saw on the trail.

We picked up four geocaches on our way in to Lincoln City and hit the highway right at the glass blowing studio.  Headed in to pick up the bowl we made yesterday.  Disappointment.  The colors were nowhere near what we and the staff were expecting.  The technique used for our bowl needed much more infusion of color and the materials used the first time blended to a gray.  The co-owner who was not there yesterday was not pleased with the result and cheerfully offered a redo.  So she and I started over with a clearer picture of what we were after.  Very nice lady and very artistic and in control of her medium (as much as one can be in control of molten glass).  Go to her web site  http://www.kellyhowardglass.com/  and look at everything there.  This is a talented person.   Kelly (with a small bit of assistance from me) produced a very nice  bowl which happened to have a shape characteristic that turned out to be kind of tricky but she worked the glass expertly.  The final step in making a blown glass object is to score the base where the glass is attached to the blow pipe.  The object is then placed over a heat resistant nest/blanket and the blow pipe is tapped.  The object separates neatly from the pipe at the score mark. A bit of molten glass is placed over the break point and smoothed and flattened to make a base.  The object is then placed in a curing oven to cool slowly over 18 hours.  Kelly had done the scoring and was carrying the bowl and blow pipe to the blanket for separation when a bit of misfortune happened.  On her way across the shop the free end of the blow pipe tapped a steel hood over an oven.  Same result as tapping the pipe when over the nest.  You’ve all heard the result of a fine glass hitting the floor.  A twelve inch bowl hitting concrete sounds much the same way.  Pictures and video of second bowl creation at Sue’s photos. Soooo…… I got to assist in making a third bowl.  It was fun.  While we created we chatted about glass artistry and dentistry.  She has a son who has some cavities at a young age and asked for some advice on some things.  Third time looked like it worked.  We’ll know for sure tomorrow.

Two blocks from the glass studio is a seafood restaurant called Mo’s.  We had to have at least one seafood meal while on the coast so we had a late lunch there.  It was tasty but not too creative.  The draw there for us was not so much the restaurant but the geocache just out the back door.  We quickly grabbed that and headed back to the carbus after what turned out to be a longer day than planned.  Along the way we found five more caches. :)

We left very late for us – nearly 10am. Not much of a deal though as our next stop was only an hour up the road. Another RV park and fishing resort, this one about a mile up a river. We were the only rig in the last park. This one was full. Still quiet and peaceful right on the river. We drove several miles north to Lincoln City to check it out and get a few groceries. We stopped at a beach access in the middle of town. 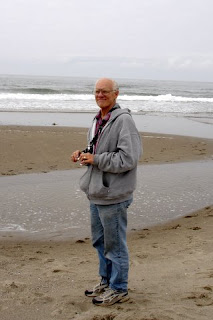 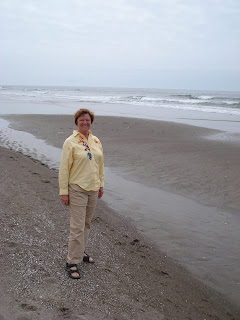 Big sandy beach that is an excellent place to fly kites. It was pretty calm so not much kiting happening.

Farther south on the Oregon coast the big tourist craft is myrtle wood factories and stores. On the central coast the big artistic thing seems to be blown glass. There are three blown glass studios in Lincoln City. They all invite you to watch production. We have seen the process a number of times and I always enjoy watching. The creativity is fascinating. In a different time and place I think I would enjoy doing it. One of the studios here has a different twist on the artistic/tourism/sales thing. You can make your own blown glass piece (with considerable assistance). We watched a number of pieces be created and debated for quite a while before I decided I would like to try it and would probably not have the opportunity again. Hard to decide what to make. Colors and styles seemed endless even for simple project. It was fun to do and I can see enjoying doing for fun and creativity. Not for production. Go to Sue's photo album to see the whole process. She did a great job.

Weather has been improving all day. May do hike tomorrow

We drove south again to catch the tide pools at low tide.  The first spot we walked to was kind of sparse for pools with much in them but we found a few. 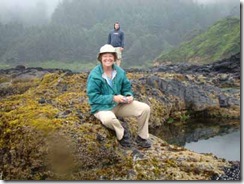 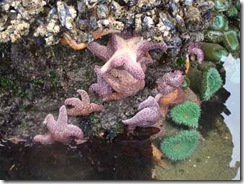 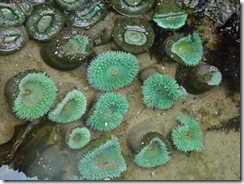 We then walked back up the trail and over to another beach.  We were going for the beach but found out that this beach is probably under water at higher tides and the rocks along the beach which were now totally out of water were covered with tide pool life.  It was like walking in a huge tide pool with a sandy bottom and no water. 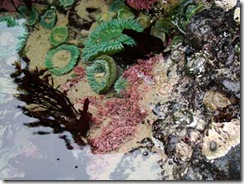 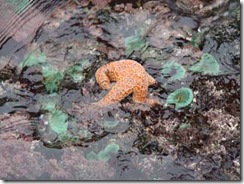 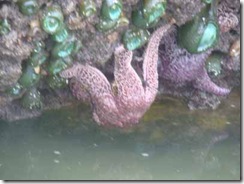 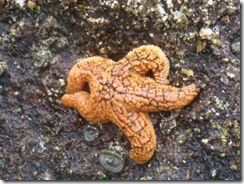 The yellow dot is a snail shell about a quarter inch long. 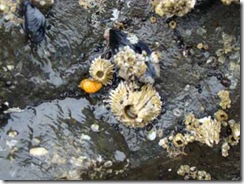 This would make a good puzzle. 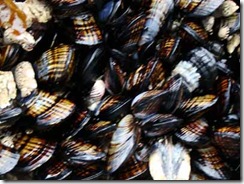 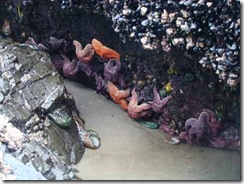 We drove to the the top of the cape to a view point.  Supposed to be able to see 75 miles out to sea and 150 miles of coastline from there.  We saw flat gray everywhere.  Could hear waves below us though.  Back down the hill to look at the campground.  Green and lush.  Wet, but green and lush.  I read a description of Cape Perpetua that said that area had twice the  foliage per square acre than the Amazon forests.  Very pretty even in the rain which by then was officially rain.  We took a short hike from the end of the campground to the largest spruce tree in Oregon.  Difficult to photograph up close and in the rain though. 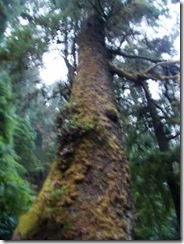 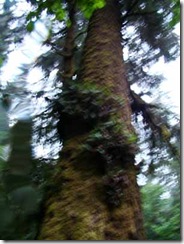 Back home to the carbus.  Turned on the heater and sat back to watch the rain and listen to it on the roof.  Have had worse Sunday afternoons.