Today we did a day trip to the northeast tip of Minnesota.  Yesterday was so foggy we could not see the shore less than 50 yards away.  Today was sunny with occasional clouds and light breeze.  No fog at all. 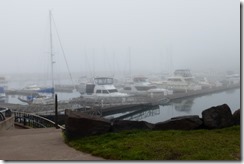 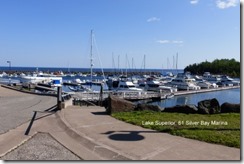 The North Shore Road runs along the shore of Lake Superior, sometimes right on the shoreline and some times cutting through forest  up to a hundred yards from the shore.  Along the way are some small communities, ‘resorts’, and numerous small homes and cabins that appear to have been there a long time.  There are a few newer resorts but most buildings are time and weather worn.  Very pretty country and view of the lake is like looking out at the ocean.  There is nothing out there but a vast blue merging with sky. 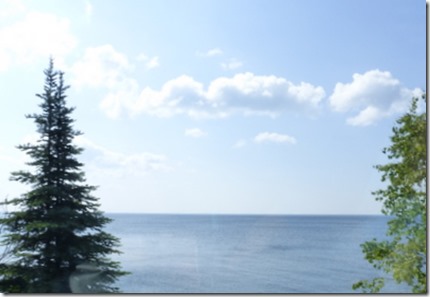 Very near the tip of the state is Grand Portage National Monument.  Monument is dedicated to showing and instructing in the life and ways of the Native Americans and European traders in the times of the fur trades.  Nice new visitor center and restoration of trading stockade and demonstration of Indian and Voyager living, canoe building, food preparation, play, etc.  Informative docents everywhere.  Well worth the visit even if we had to drive over 90 miles one way. 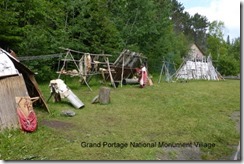 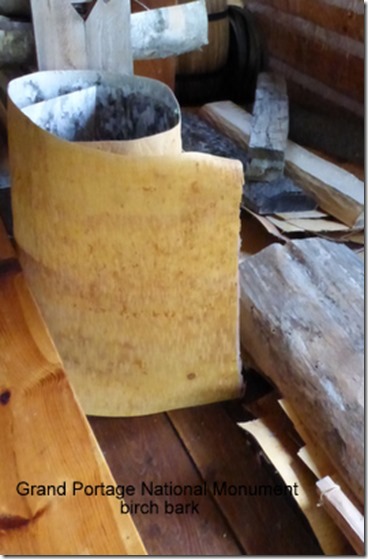 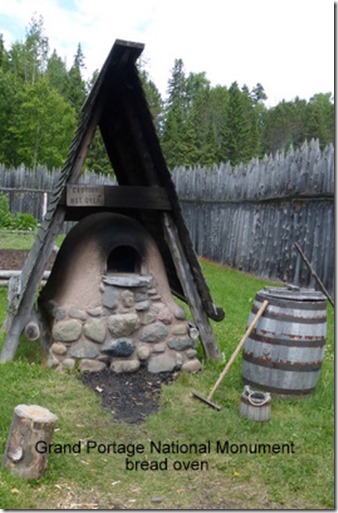 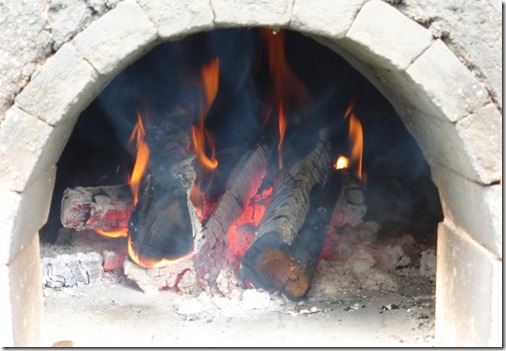 Oven is just about ready 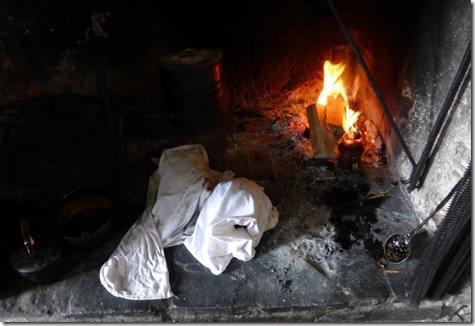 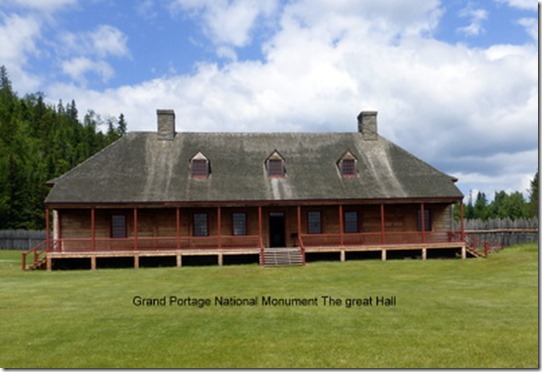 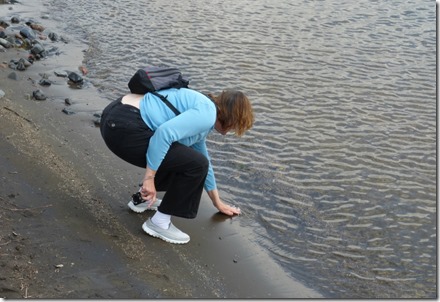 Touching Lake Superior.  Would not want to swim in it.  Water temperature is 40 degrees.

A few miles further up the road is the Canadian border.  The border here is the Pigeon River.  A half mile walk along a paved and boardwalk trail takes you to the highest waterfall in Minnesota. 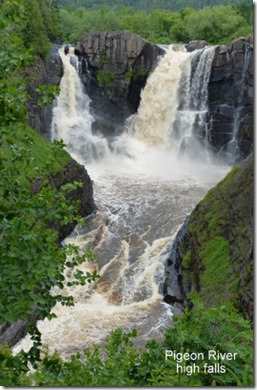 Return drive was just as pretty as the drive up AND we found a DQ.

Sunday night we stayed in Thief River Falls.  There are lots of towns with ‘Falls’ in their names but have yet to see a falls.  The rivers here are mostly flat and slow. Monday we drove north and then east on Minnesotas’ ‘Lady Slipper Scenic Highway’.  The Lady Slipper is Minnesotas’ state flower.  Related to the orchid.  Supposed to be thousands of them in bloom along this stretch of road this time of year.  Did not see one in sixty miles.  Stayed the night in International Falls.  Often the coldest place in the nation in winter.  Yesterday it was quite warm.  Just across the river (which we paralleled for many miles) is Canada.  We camped next to a couple from Canada who came down to the US to buy gas (cheaper) prior to going to southern California to visit their daughter and new grandchild.

A word about landscape and foliage.  Western Minnesota is pretty much flat farm and ranch land clear to the  northern border.  One thing stood out to me.  The farm/ranch houses and out buildings were fresh and clean and neat.  Many looking fairly newish.  Nice one and two story farm houses typical of the midwest.  The different thing is that all these buildings are surrounded on at least three sides (west, nortn, east, and often south also) by thickets of trees.  Not just rows of trees but dense thickets of 30’ trees 30-40 feet deep.  Much of the time the thickets start within a few feet of the house.  Very nice houses encapsulated in trees.  I guess it is protection from winter weather but except for a few hours each summer day the houses are in shadow.  Interesting to look over the open fields of hay, corn, and sugar beets and see thickets of trees each containing a farm house.

As we moved east we started to encounter the North Woods.  The open areas became less and smaller and trees increased.  Much different than the western forests we are used to.  In the west, even the most dense forest has space between trees so you can look for some distance through the forest growth.  Also, the trees are tall.  The North Woods is a DENSE mixture of pine, fir, and a variety of deciduous species.  The trees are so thick you cannot see 10’ into the forest.  The trees are also short by western standards – less than 30 feet tall. 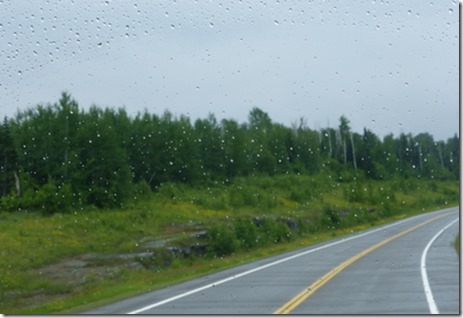 If you were dropped into the middle of a North Woods forest you would be instantly lost.  GPS would not work because of trees.  Forest is so thick you can not see sun to get bearing.  Compass would work but without landmarks you could not tell where you were. 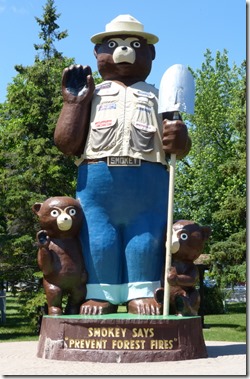 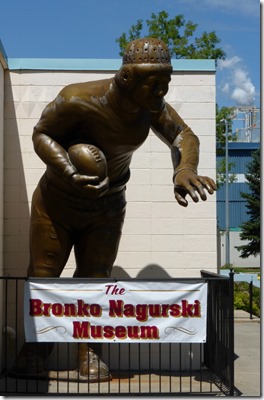 Minnesota has a thing for big statues.  These two are in the same park in International Falls.

From International Falls we headed south and east.  Along the way we went to one of the several visitor centers for Voyagers National Park.  Got my National Parks Passport stamped and as we were leaving we walked by a small wooded area by the parking lot.  Some trees, grass, and a few different wild flowers.  I noticed a very small sign at the edge of the area.  It said, “Lady Slippers in bloom.  Please stay out”.  We looked around and sure enough there was ONE plant with five or six blooms.  And they appeared to be on the way out.  Not the thousands we were hoping to see but we did see one. 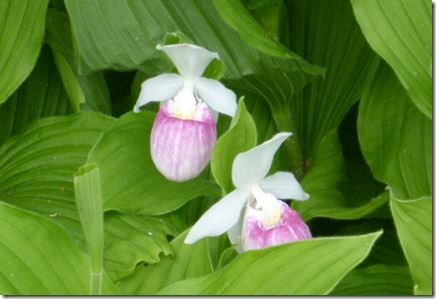 We continued east to find Lake Superior.  We found it but could not see it.  Dense fog.  About 30 feet visibility.  We are camped at a ‘resort’ on Lax Lake which is a few miles west of the lake near Silver Creek, Minnesota and out of the fog.  The weather is improving now and the sun is out here.  Forecast for tomorrow is sunny and some wind.  Hopefully it will clear the fog for our day trip along the North Shore Drive.

Oh yah. Happy Anniversary to us.  Will have to wait a few days to have our Mexican food dinner (with margaritas).  Hard enough to find a restaurant here let alone a Mexican one.

Left Minot a little before 8:00 am and headed east on roads not yet traveled by us. 200 miles of North Dakota farmland.  Excellent road.  Four lane divided highway with little traffic.  Saw a lot more water than I expected.  Lots of little lakes and marshlands.  Maybe due to wet spring.

Along the way we passed through Rugby, ND.  Rugby’s chief (only?) claim to fame is that it is the geographic center of North America.  (GPS has since shown the spot to be several miles from there but what the heck.  The Native Americans still proclaim their tourist trap to be the Four Corners even though it isn’t.) 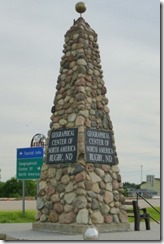 On to Grand Forks and Sam’s Club for gas.  Cheapest gas we have seen so far this trip. 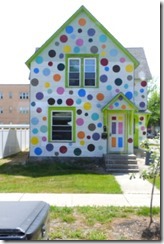 Then in to Minnesota and a stop at the visitor center to pick up several pounds of literature on see/do in the state.

Medora and On to Minot

Note:  I have added some pictures to the previous post.  Check them out.

This morning as we got ready to leave the park, Sue said “Let’s take the car and look for some wildlife”.

Just past the entrance to the campground the park road makes about a 25 mile loop through the North Dakota Badlands.  If bison are not grazing in your campsite then you might see them ( and other wildlife ) somewhere along this road.  We planned to go part way along the loop to look for things and then return.  We got about eight miles into the loop before we saw anything – a ranger doing some maintenance along the road.  He did happen to be across the road from three wild horses (there are several herds in the park). 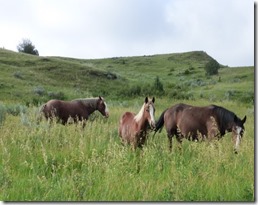 We chatted with him for a bit and decided to continue along the loop.  Several miles later we came upon a lonely buffalo walking beside the road.  We took his picture and moved on. 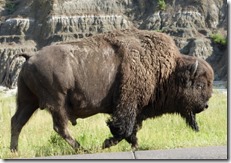 Several twists and turns later we approached a herd of 10-12 wild horses strolling up the road.  They filled the road and were in no hurry to leave it.  We followed them for a half mile or so ‘till they finally moved off to the side. 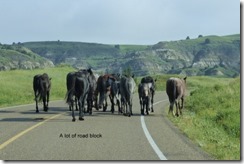 Several miles later a doe and young (and frisky) faun crossed in front of us. 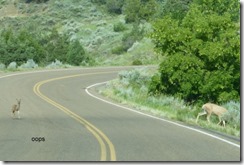 Then we saw another herd of wild horses standing on a ridgeline. 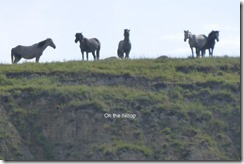 Around a turn, looking across a small valley we saw about 30 bison moving around a hill next to the road.  Plodding along stopping to roll in the dust or scratch on large rocks.  Around that hill we saw where the first bison were heading.  A large, flat meadow/plain next to the Little Missouri River.  The scene was like something out of ‘Dances With Wolves’.  The plain was filled with bison.  Well over 300, maybe over 400.  Buffalo everywhere.  We have seen large herds in South Dakota but nothing like this.  For comic relief the plain is also home to a large prairie dog town, one of many in the park. 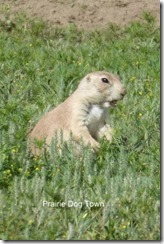 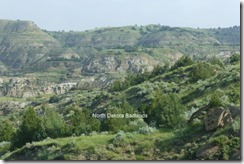 Wildlife viewing accomplished, we returned to the carbus and headed north and east to Minot.