Long trip from Des Moines – 30 miles.  Arrived by 10:00 and parked in a very nice city park campground.  Early was good.  35 camp spots.  When we arrived four of the spots were taken. By the end of the day there were only a couple of spots open.  Middle of nowhere but it was Friday (start of weekend) and there is a festival next weekend that people may be early for. 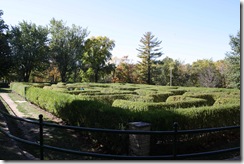 City park has this neat maze. 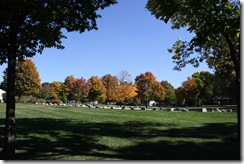 Winterset is a delightful  mid-west town that is exactly what you would picture a mid-west town looking like.  Quiet, tree-lined streets (LOTS of trees and they are just starting to change colors.  Pretty), mid-west farm style houses on large grassy manicured lots with very few fences anywhere.  Little kids sitting on house steps waving as you walk by.  Friendly people everywhere. Very comfortable feel.

Winterset has several other draws.  It is the home town of Fons and Porter.  This is a mother – daughter team that produces a quilting TV show that Sue watches 4-5 times a week.  Had to visit their store.  Sort of a Mecca thing.  Looked like a quilt store.  A small one at that.

Winterset is also the birth place of John Wayne.  The house he was born in is a little larger than Herbert Hoovers birth place but not much. 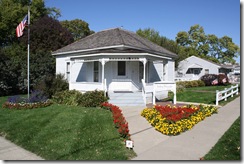 We found a clever geocache in the backyard.

Winterset is also the county seat of Madison County, home to numerous covered bridges immortalized in book and movie.  We spent much of the day on a driving tour to see the bridges and other sites of interest. 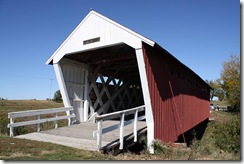 This is the oldest. Over 140 years old.  The one below is the next oldest.  The rest were built by a different person. Note roof difference. 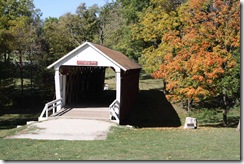 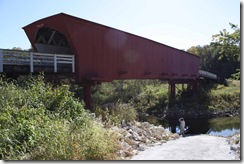 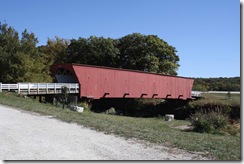 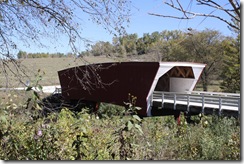 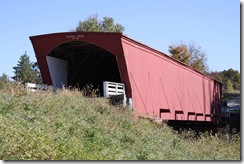 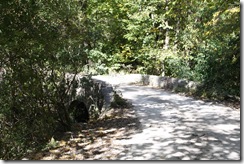 This little bridge was a site in the movie. 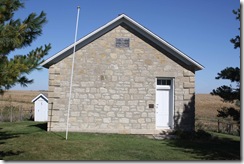 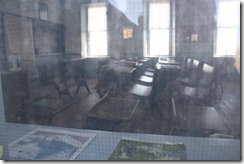 Inside of school house taken through window. 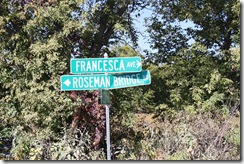 I guess Francesca is a character in the movie.  Don’t know which came first.

We left the campground early to ensure finding parking close to the convention center.  Just in time for the Des Moines morning commute.  Not too bad.  Unlike Sacramento which has all freeways leading into the city, Des Moines also has freeways that circle the city so one doesn’t have to go the center of things to go from outlying spot to outlying spot.  Really helps with congestion.

We got the desired close parking spot and then wandered the halls of the convention center for a while before the quilt show opened.  At 9:00 they opened the doors and the experience began.  The Auburn Quilt Show is pretty good sized.  Around 400 quilts usually.  This show was in two buildings – the large convention center and the adjacent arena connected  by a skyway (more on skyways later).  The floor of the arena had over 600 quilts on display.  The convention center had over 400 more quilts on display AND all the venders in one huge room.  We started at 9:00 (8:15 if you count the pre-wander) and were back in the afternoon commute at 4:45.

Lots of amazing quilts by imaginative, creative, and talented people.  We took lots of pictures.  You will never see them.  We were free to photograph but not reproduce or post in any way.  Most of the quilts were from the Mid-west but there were entrants from many other national and international locations.  Several quilts from California, some of which placed well in the judging including one from El Dorado Hills, CA.

Venders of all sorts and persuasions.  If it could be tied to quilting or sewing it was there – many times over. We did find a couple of useful tools that we had not seen anywhere so we got those along with a number of ideas and techniques.

We thought it was a pretty big show and we filled a day seeing it. (One day was sufficient though.)  Folks we spoke with later said it actually was 30% smaller than years past.  The show we plan to see in a month will be much larger.

A word about skyways.  Downtown Des Moines, an area of about 25 square blocks, is completely connected.  Stores in the same block connect with each other by some internal doors and all the blocks are connected to each other by elevated skyways that tie into one or more buildings on each end.  It is possible to navigate all of downtown without ever going outside.  Pretty cool.  Very nice in the winter I imagine.

The weather the day we went to the show (Wednesday) was very nice.  Sunny, light breeze, warm.  We were inside all day.  Thursday was a little different.  Steady 35+ mph wind.  Gusts over 50 mph.  Still sunny but obviously not too warm.  We were not inside.  We started the day by packing up the carbus and taking it to get the oil changed.  Then back to the campground to hook up again.  Then off to visit a couple of fabric stores to get supplies for a project spawned at the show.  The afternoon was spent in the carbus starting on the project and being buffeted by the wind.  The only thing on the evening news that night was the wind and its effects.

North and then a quick jog east to North Branch, IA.  This is the birthplace and final resting place of Herbert Hoover.  His presidential library is on the grounds as well as a number of neighborhood houses and out buildings.  The house he was born in and lived in for a time with his parents and brother and sister is VERY small. 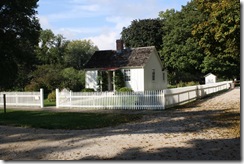 Two rooms.  One for sleeping. One for living, cooking, etc.   Looks like the two room house is smaller than the Lincoln one room cabin. This man came from very humble beginnings. 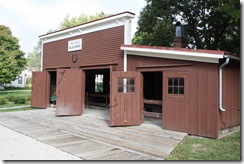 Fathers blacksmith shop.  Located across street to right of house in above picture.

Learned that he was in the first entering class of Stanford University. 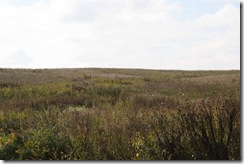 Tall grass prairie.  Small example of how entire area would have looked when Hoover was here. 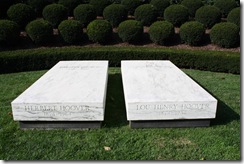 Back west and on to Des Moines.  We have finally reached our first major goal.  We gassed up at Sam’s and then checked in to the RV park.  Lunch and then back in to the city to check the layout for tomorrow.

Return to a Happy Place


North again back to Iowa but first a side trip to return to a spot we went to two years ago. About a hundred miles out of the way but it was fun. We revisited Walt Disneys Dreaming Tree and Barn. The free is still there but looking pretty sad. Totally dead and major limbs all fallen off. They have planted a "Son of Dreaming Tree" nearby to fill in for the original in a few years. The barn is fine. 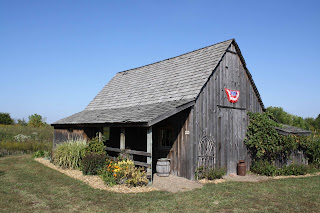 The inside of the barn is filled with signatures and notes from Disney fans. Last time we were her we signed for Kens family but only had a ball point pen. Today we couldn't even find where we signed before. We resigned for them in permanent marker and while we were at it we signed for the rest of the family :) . 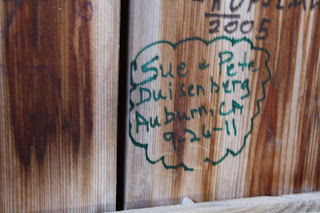 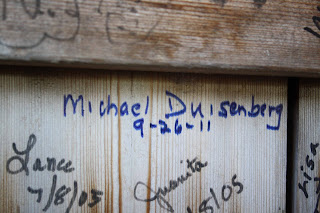 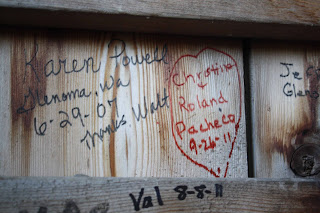 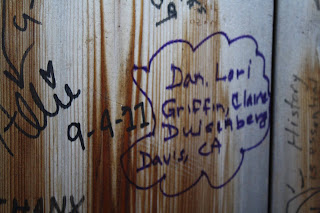 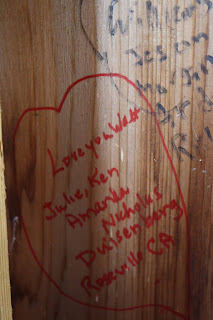 Back east to get near our first objective for tomorrow.
Addendum: While heading east in southeast Iowa we passed a road sign for 'American Gothic House'. We looked it up and it is indeed the house that inspired that in the classic painting. It is several miles from the highway and it was starting to rain so we had to pass. But it is now on our list of things to see :) .


East to St. Louis. We wanted to see the Arch from the east side of the river this time. A word of warning, the St. Louis area is NOT a fun place to navigate in a car let alone in a motorhome pulling a car. Three navigators and two maps and we still crossed the Mississippi River twice before we finally made it to the little park on the east side of the river across from the arch. Good thing it was Sunday. The park has a nice viewing platform that gets you above the train tracks on the edge of the river. 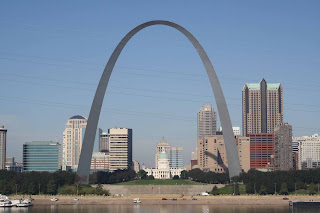 Arch with historic court house in distance. Below courthouse, below green strip, is a set of stairs that seem to reach from one end of arch to the other. Last time we were here the river was half way up those stairs. 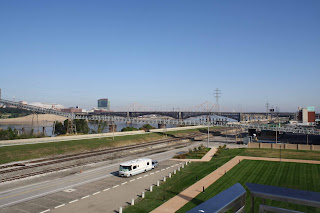 Carbus from top of platform. 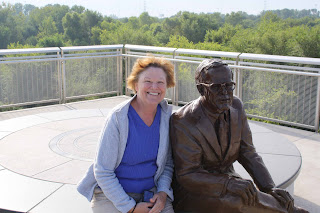 Back across the river (another adventure) and west of St Louis to U. S. Grant Home National Historic Site. As always, well done visitor center with informative displays and videos. Learned more about Grant and his life in 30 minutes than I had ever known. 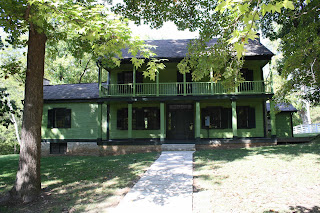 North out of the city (YAY!!) and north to another RV resort. This one more typical. Not as folksy but still nice. Much of it cut back for the winter but looks like it would be fun in the summer. Best water slide complex I have ever seen including one slide that goes underground.