Yesterday we drove the loop through Grand Teton NP. revisiting sites we had seen and done several years ago.  We saw LOTS of people.  Far more than we remembered from last time and we are only three weeks sooner this time.  Saw some wild life (Buffalo, pronghorns, elk, coyote, badger, and maybe some others) and LOTS of people. 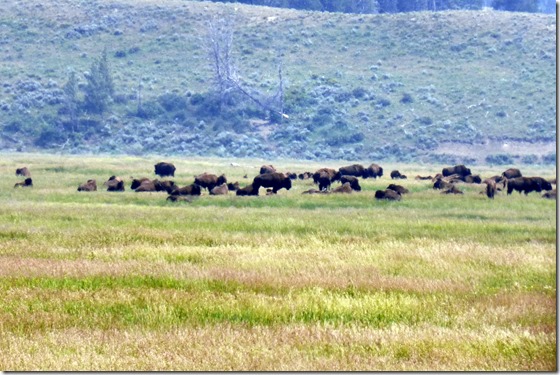 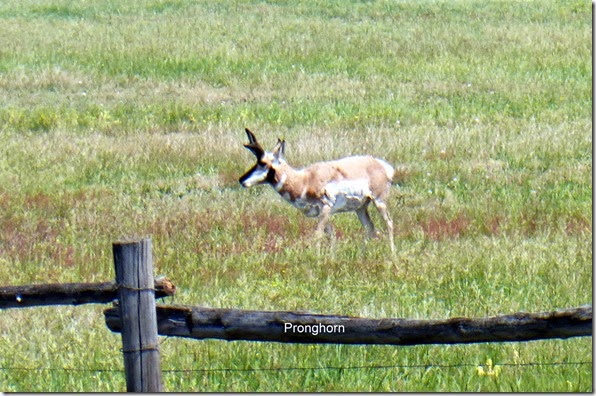 What we did not see too well were the mountains.  Smoke from fires in Oregon and Washington had blown two states east thick enough to greatly reduce visibility of the mountains that dominate the view from anywhere in the park. 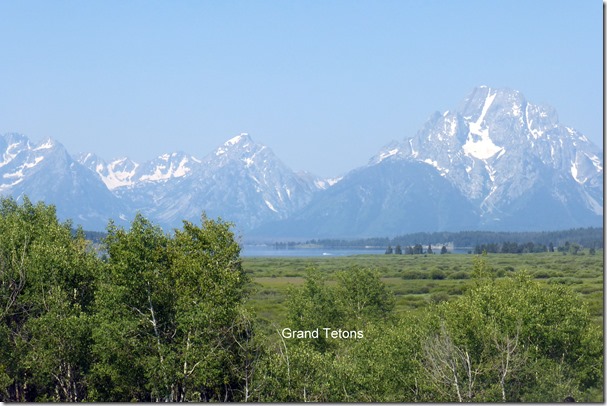 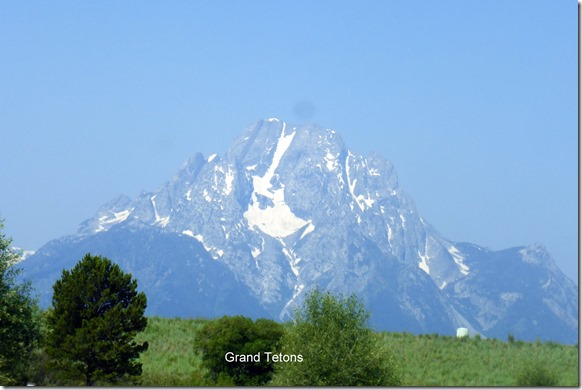 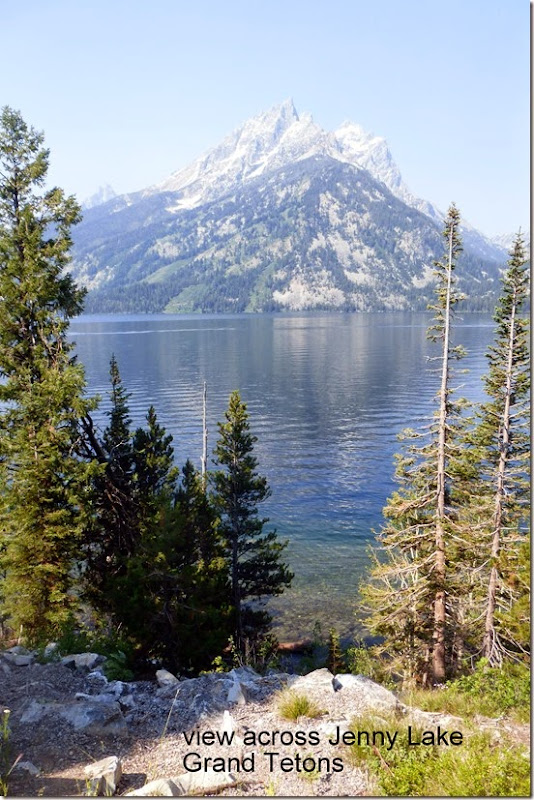 The smoke was so thick that when I took a picture down the valley the camera said the scene was back lit.  All it saw was a wall of white. 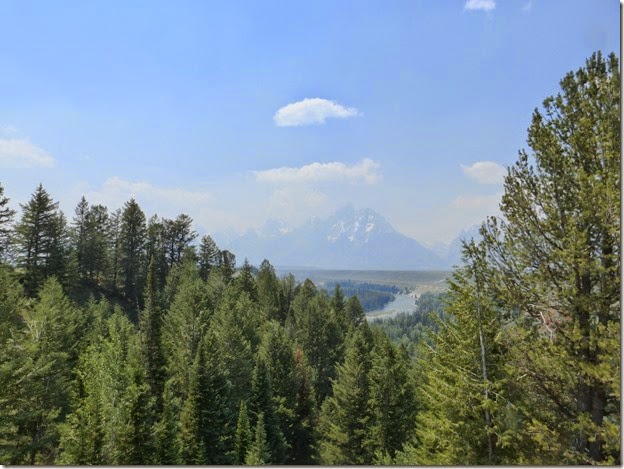 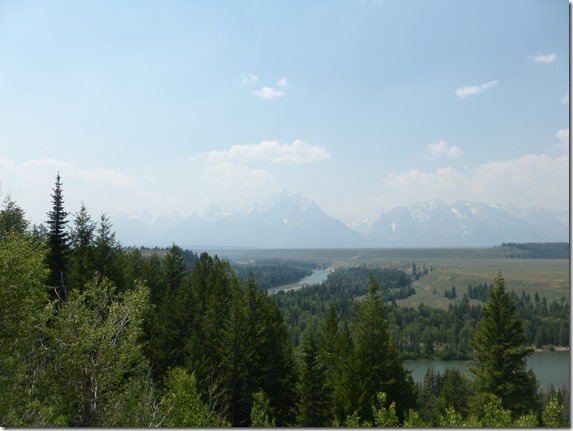 This morning as we were heading south I made a small error.  There are two roads through the park.  One is faster and less scenic (except for the ever present mountains), the other about the same length but slower due to twists and turns.  I was day dreaming and took scenic road.  No big deal. Early in day so traffic not bad.  It was going to be though.  As we drove by the southern entrance station the line of cars to get in to the park was nearly a quarter mile long.  A little further on the scenic road joins the faster road.  About 300 yards before the junction, the scenic road crosses the Snake River.  As we approached the bridge we saw cars parked along side the road, a gaggle of people at the far end of the bridge, and more cars parked off the road.  In a national park that is a sure indication of wildlife.  We drove slowly across the bridge and looked where everyone else was looking. A moose.  Not just a moose but a MOOSE.  Just past the bridge I was able to pull the carbus and toad off the road and park so we could walk back to bridge.  We saw a number of moose on our trip to Alaska but this guy was BIG. 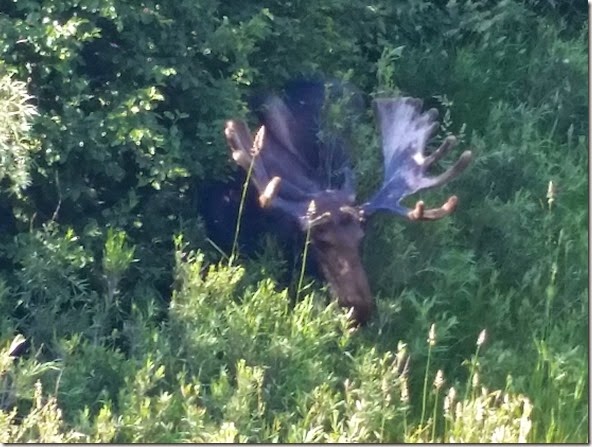 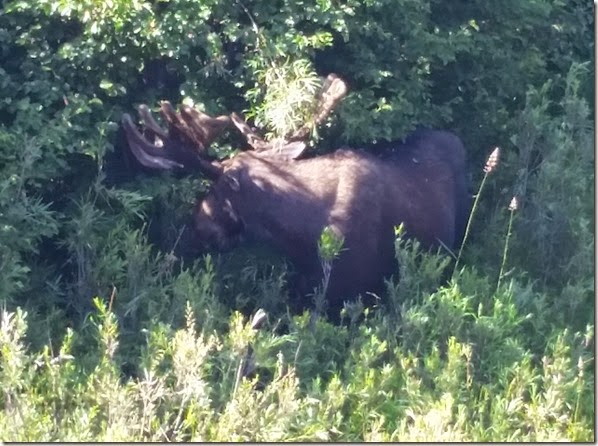 Pictures do not begin to give justice to size of this guy. Antler span was 5 or 6 feet.

Had we taken the other road we would have missed this experience completely by less than 200 yards.

Here are Sues pictures from this morning.  Much better. 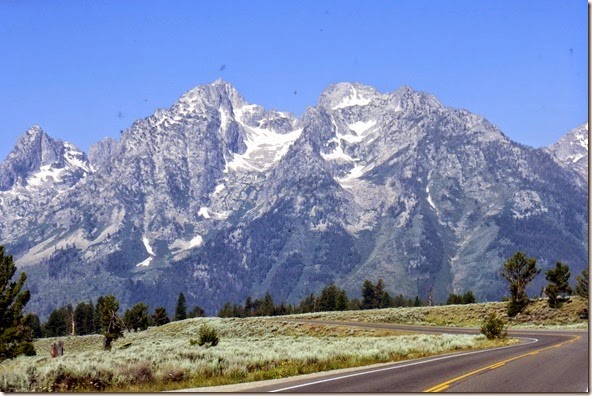 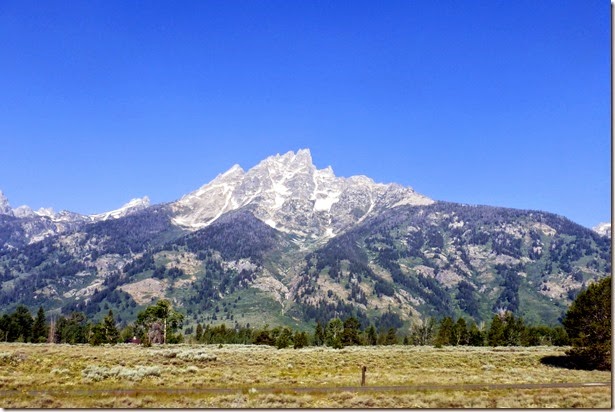 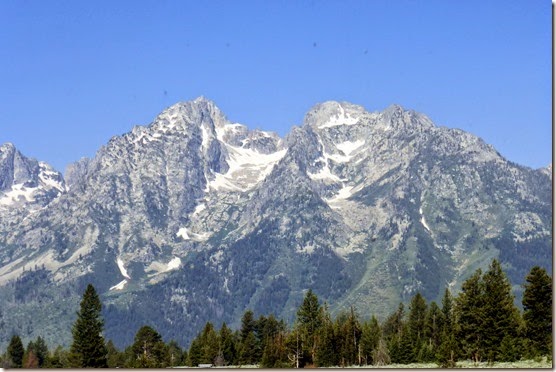 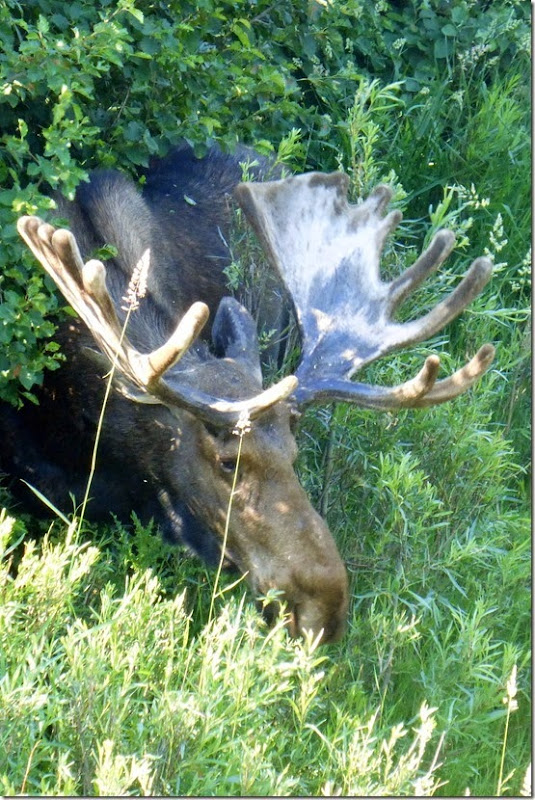 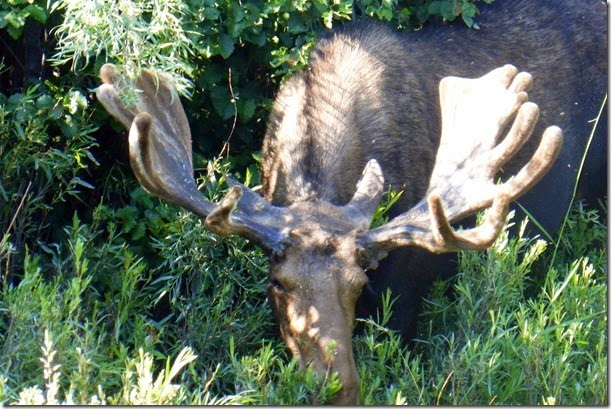 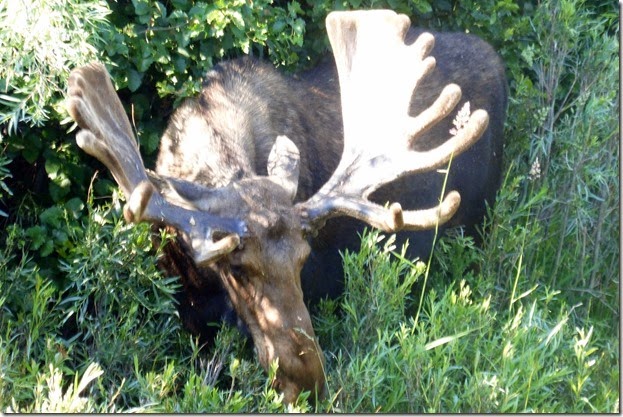 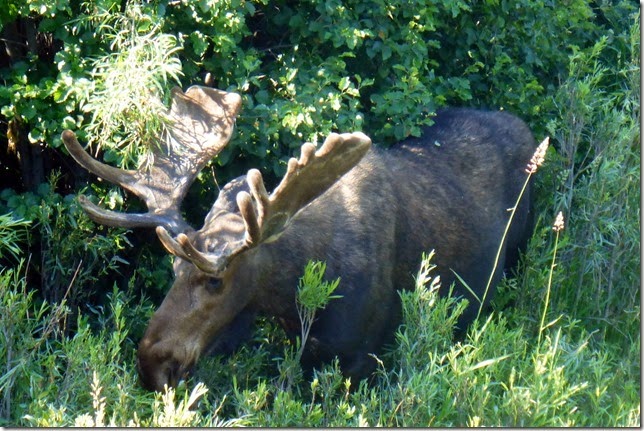 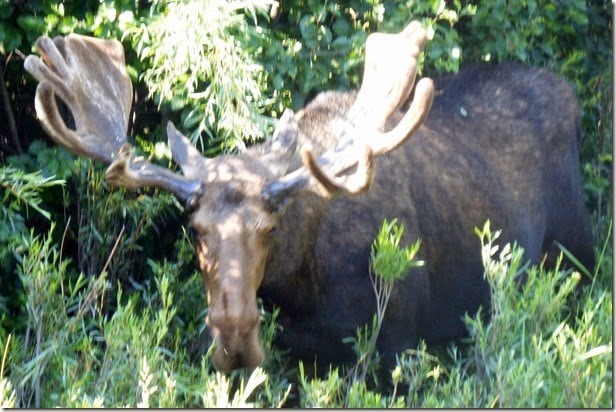 In Canada, along the Banff/Lake Louise Parkway they have wildlife overpasses so wildlife can get across freeway safely.  In Wyoming, this is how cattle get from one side of road to the other. 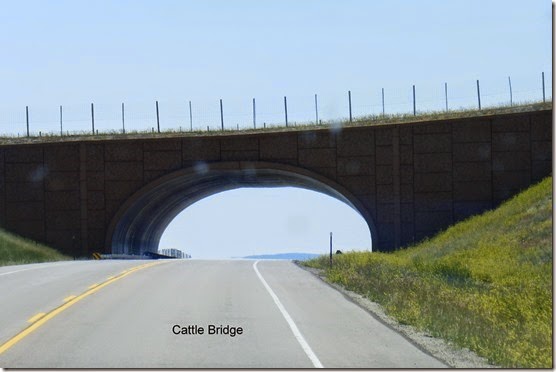 Left West Yellowstone at 7:30am.  Wanted to avoid crowds entering park that happen not much later.  Easy drive into park and down west side to Old Faithful area.  Got a front line parking spot in empty lot.  Strolled over to geyser viewing area just in time to see final spurt of current eruption.  Next eruption forecast for about 90 minutes later.  Strolled new visitor center (under construction last time we were here).  Lots of informative stuff.  Then we walked a geyser loop near Old Faithful. 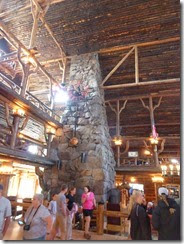 360 degree view of inside of lodge.

Then to viewing area to wait for anticipated eruption.  We got there early and eruption was late.  Quite late.  We were about to leave when things got into full gear.  Glad we stuck it out. 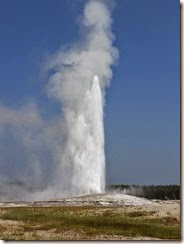 South over the Continental Divide (twice) and down to Grand Tetons National Park.  Found camp spot at north end of park.  Will stay for a couple of nights to rest a bit and re-tour the park.

Plan for the day was to go east and then turn south a few miles before Bozeman to head to West Yellowstone.  We were passed on the freeway by a number of cars and trucks moving pretty fast and some moved back in front of us without much buffer space.  Several times we heard ticks as rocks were thrown in our path.  There were also many bugs which also make ticks when they hit the windshield.  I happened to look over at a spot on the windshield that I didn’t remember seeing earlier.  I asked Sue to look at it and she said it was a chip and it looked pretty deep.  So—out comes the smart phone to research and contact glass repair in Bozeman.  First try was swamped but second call said come on in.  Drove ten miles, past our planned turn, to Bozeman.  Parked on side street next to glass shop.  After small delay to finish another job, our windshield was repaired to almost undetectable in just a short time and we were on our way.  Returned to planned route by a different road so no back tracking.  Road to West Yellowstone from the north is designated as scenic by AAA and it is.  It follows the Gallitin River which is a very popular fishing locale.  There were lots of them doing their thing.  Scenery is great.  Narrow canyons and high meadows, all green.

This is the middle of summer and finding a camp spot for tonight was a bit dicey but thanks to the smart phone and research by Sue we finally pinned down a spot just as we got to town.

Parked, hooked up, and then walked into town to the post office and then to sightsee for a while.

On east to Three Forks and Missouri Headwaters State Park.  We camped here last year. (in same camp site) Nice little park located at the junction of three rivers which then form the beginning of the Missouri River.  No hook ups but very quiet and peaceful. 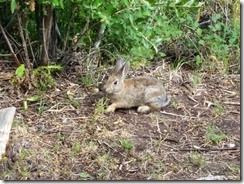 One of our neighbors.  They were all over.  Could probably see eight or ten of them at any time from the RV.  This picture is not zoomed.  He really was that close.

This morning we bid auf wiedersehn to Mike and Gladys.  Wish they were closer. Good friends.

Across the Idaho pan handle and into Montana to Missoula.  Nice weather.  Light overcast that began to thicken behind us as we drove east.  ( Got an email from Mike and Gladys that a few hours after we left Spokane had several hours of thunder and lightning and HEAVY rain.  We had an occasional sprinkle.  The sun was out when we parked in Missoula campground.  Decided to pull out awnings to shade windows.  First pull down strap broke at awning when pulled on.  Rotten.  Several years old and no use for some time.  Second strap did same thing.  Fortunately Missoula is a good sized city with well stocked parts departments in RV dealers.  Hadn’t planned on going into town but the quest did help fill out our afternoon.  Straps replaced and spare stored.

This morning, while temperature still comfortable, we all took about a three mile walk on walk/bike path along the Spokane River in downtown Spokane.  Very nice path.  Could see doing it every day as many do.  Walk concluded at 100 year old carousel. 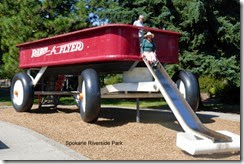 Not your normal wagon. 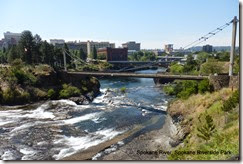 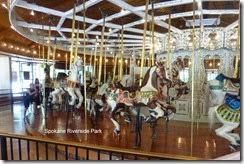 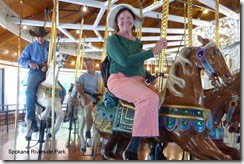 Carousel had rings to snatch and throw but times have changed.  Carousel of my youth had real brass rings.  These rings were plastic and gave little satisfaction in throwing.

Last night we repeated what has now become tradition for us when we are near Grand Coulee Dam.

First a visit to one of the best Mexican restaurants we know. La Presa (The Dam) Mexican Restaurant.  Great food and the margaritas are

That is not photo trickery.  The drinks are huge.

Back to RV park for courtesy shuttle to dam visitor center.  Every evening a laser show is projected on the dam.  Normally, the spillways are closed and water is channeled through the three power houses.  Just before the laser show the spillways are opened to create a white wall of water to project the light show on.  The spillway alone is probably a quarter mile wide. 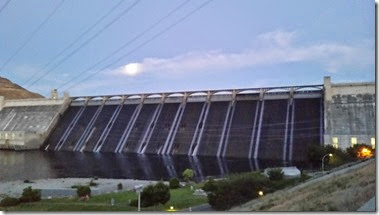 (The whole dam is a few feet short of a mile wide).  Last night was also a Super Moon so we had man made and nature light shows. 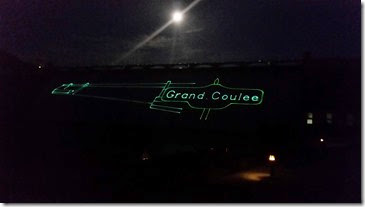 This morning we drove through the rolling grasslands of eastern Washington to Spokane to see friends Mike And Gladys.  Day was kind of warm so was spent in car doing some touring or in house with much chatting.