No other way to put it – Texas is BIG.  Even when you start part way in and are going to the closest western border it still takes a long time.  From San Antonio, about a day and a half of comfortable driving to get to Marathon, Tx which is about 40 miles north of Big Bend National Park.  I will say this though: as you move across Texas from East to West the landscape is constantly but subtlety changing.  Each area with its own special beauty.  Flat to rolling hills to rounded mesas to flat with river canyons to mountains with different geology than fifty miles earlier to desert and on and on.  Yes it is big and takes a long time to traverse but if you look around you, you will never be bored.

Tomorrow we will go to Big Bend. 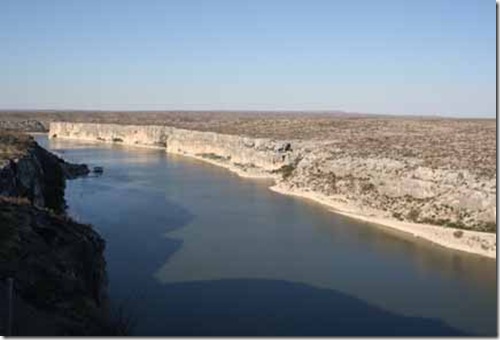 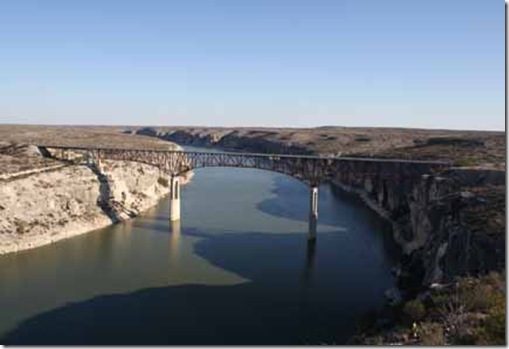 Bridge over Pecos River.  Highest highway bridge in Texas there is a railroad bridge over the same river that is a bit higher. 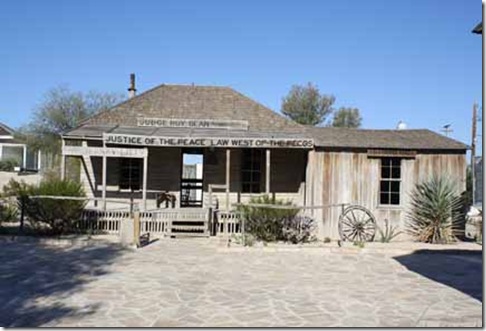 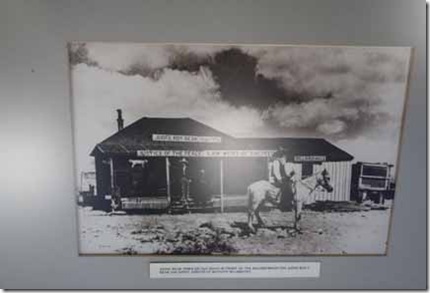 Photo of building when in use. 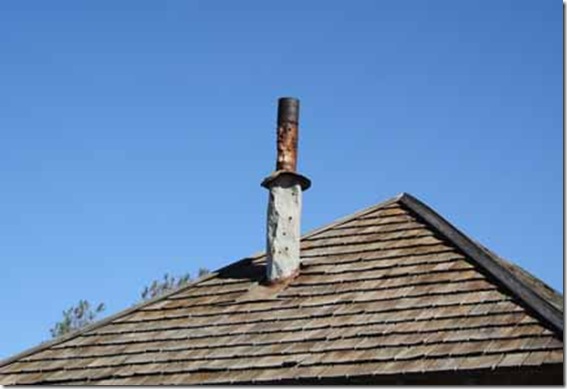 Updated map of this trip

This morning we walked the downtown area.  We began with The Alamo.  We strolled the grounds and read the informational postings scattered throughout.  A walk through the church and a picture of the front and that was it.  Interesting to learn that the iconic church building, made famous in pictures and movies, was not the site of the battle.  The fighting happened in the walled plaza area adjacent to the church.  That area is now almost all gone and covered by the infrastructure of downtown San Antonio. 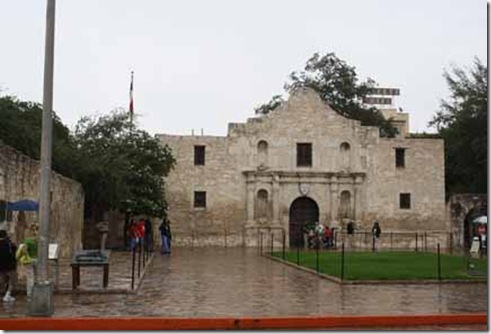 Next we walked the River Walk loop.  Much of our stroll was in something unusual for this area – rain.  Not very hard and not very steady but enough to put a damper on all the outdoor riverside restaurants and the river tour boats.  Still fun to see again.

We followed the River Walk into the Hemisfair park grounds and saw what had been done with the facilities.  Last time we were here the actual  Hemisfair was going on.  Now it is a business/cultural park with lots of fountains, pathways, and grass.

When I get to them I may put a few more pictures on this day so check back.

We said goodbye to all the deer (not really) and drove south for an hour to the outskirts of San Antonio.  Gas at Costco (first Costco this trip) and a couple of groceries.  A few more miles and we stopped at a RV parts store for a part for our TV antenna.  While there I asked if maybe they could change the oil in the carbus.  This was Monday morning and they were swamped but he said ‘No problem’.  He moved some RVs around and put a guy (two actually) on our RV and were were on our way in 30 minutes with fresh oil.  Very nice people.

We are now situated in a park/resort south of town.  Tomorrow we will visit downtown San Antonio.

Yesterday we left Houston, headed west, and started to get a feel for the extent of the drought in Texas.  We drove by fields that once had crops but now are large plots of dirt.  Pastures with cattle in them trying to eat burnt grass that has already been eaten to less than a quarter inch.  Many dried up ponds, some quite large.  Along the way we stopped to visit the old homestead of some friends of ours in Auburn.  As we walked the property the grass crunched under our feet and we had to watch for deep cracks in the ground.  We ended our days travel at a RV park/resort in a large lake.  The lake is down over nine feet.  The manager (who had ties to Auburn area) said there are lakes that are down over 50 feet.  An interesting feature of this park is that the deer population is at least as great as the people population.  Possibly due to proximity to water and availability of grass (in landscaping) to eat.  Do not know that I have ever seen does and bucks together but they are here, Don’t know if it is the breed of deer but these are all quite thin.  Can see a hint of ribs on most of them.

Today we took a side trip to Johnson City, lifetime home of Lyndon B. Johnson (when he wasn’t in Washington D.C.).  In town is a visitor center and a walking tour of Johnson’s boyhood home and his grandparents homestead.  Fourteen miles west is the combined state and national parks that encompass the Johnson Ranch. 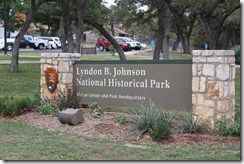 At the visitor center we watched a very good movie on Lady Bird (there is one on LBJ also) and then took the walk. 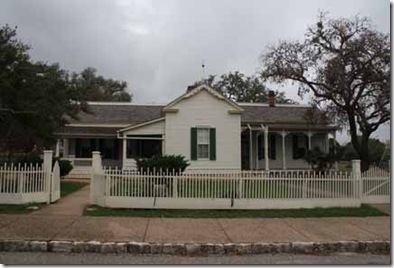 Neat to see the original buildings, many built in the now recognizable to us ‘dog trot’ style. 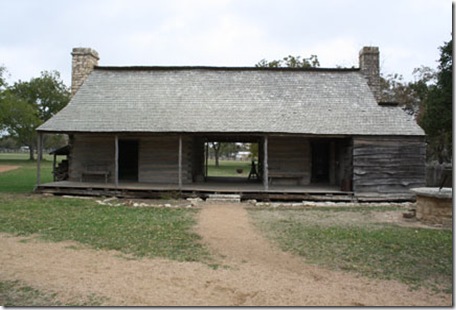 At the ranch in the state park portion, we first watched a movie on LBJ and the Texas Hill Country.  We then visited a real gem.  The state park contains an actual farm.  All original buildings on original sites and restored to condition of most activity (1900-1940).  And it is operating.  Every day of the year there are docents doing all the functions of a farm.  Not just on special days.  This is an on going operation so you can experience the flow of farm life.  This might not sound too impressive unless you know that electricity did not come to the Hill Country ‘till the mid ‘40s.  Everything was done by hand and all heat was by wood.  The docents demonstrate many gadgets and techniques used to process and prepare foods getting maximum use of everything they touch.  Fun experience.   We spent over an hour just there.

The state park is the entrance portal for the national park administered Johnson Ranch.  they give you a map and loan you a tour CD. No cost.  The tour is an interesting showcase of LBJ life outside of D.C. 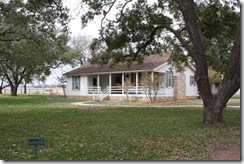 House where LBJ was born 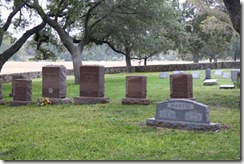 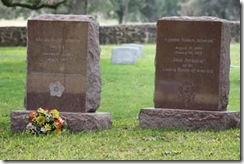 “Lady Bird’ and Lyndon Johnson.  Most ‘real people’ presidential grave we have seen. 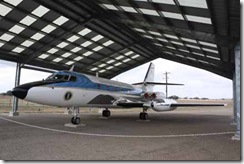 Johnson referred to this plane as ‘Air Force 1/2’.  Small jet used to take president from large airport in Austin to landing strip on the ranch. 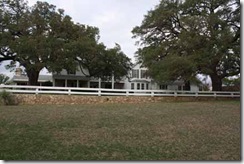 ‘Texas White House. ‘  Johnson Ranch family home.  It really was a ‘White House’ (seat of national government).  The wing on the left behind the 400 year old oak was the equivalent of the Oval Office.  Johnson spent 25% of his presidency on this ranch. 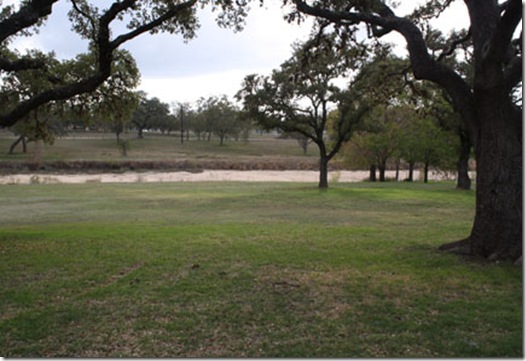 This is the Pedernales River that runs by the front of the ranch house.  Normally it is full and flowing and has been known to flood to a level behind where this picture was taken.  This year it is sand only.

We just completed a weeks layover in Houston, the second planned objective of our journey.  We stayed at an Elks lodge about 20 miles southeast of downtown Houston.  The lodge is located about a mile from a major freeway that goes right to the heart of downtown which was our objective for most of our stay.   About a 30 minute drive – at 11:00 in the morning.  From 6:00am to 10:00am and from 3:00pm to 7:00pm the drive can be two and a half hours or more.  I think I already mentioned our trip north through Houston on another freeway.  Similar situation on this one.  Fortunately we were able to avoid the worst times.

The first three days we did some shopping, quilt shop hopping, and sight seeing.  This is no small feat.  Houston is the largest city in Texas and the fourth largest in the country.  The fold up street map is larger than our dining room table. (And I don’t mean the table in the carbus)

One landmark associated with a near to downtown mall is a water wall.  Hard to get a picture that gives a true feeling of the scope of this thing. 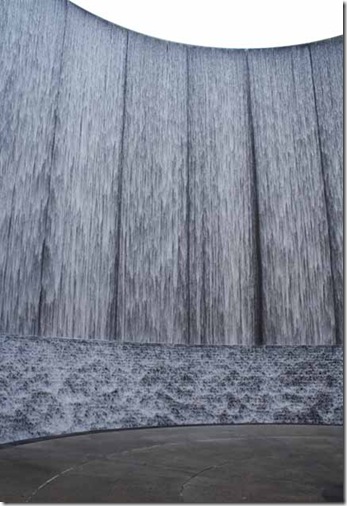 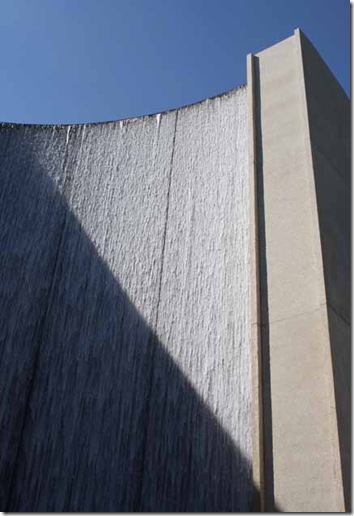 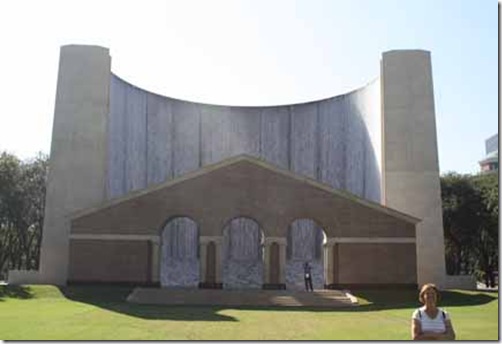 To get some idea of size, note man standing in archway

The second three days were devoted to the International Quilt Festival and visiting an interesting feature of downtown Houston.

First an observation and comment.  Houston has an arena (think ARCO, or whatever it is now called, only larger), a huge convention center, and a major league baseball stadium within a block of each other strung along the eastern edge of downtown Houston.  A half block east is a major freeway that dumps traffic onto narrow city streets with no buffer to take up exiting traffic. Three blocks west is the literal heart of downtown with financial towers, city hall, courts, etc.  On a dull weekend day the traffic is a challenge.  A weekday is approaching zoo status.  Add an event in any of those venues and a zoo looks like a cemetery compared to downtown Houston traffic.  There are a number of parking garages and lots.  They were pretty much all full with convention center attendees.  Yesterday evening there was a Grateful Dead concert in the arena and the times overlapped.   Fortunately we left in the late afternoon.  My comment to Sacramento: Do NOT put an arena downtown!

The Houston Convention Center is one building three blocks long and one block wide.  BIG blocks! Three floors.  First floor is one  HUGE room (can be partitioned to three rooms each the size of a city block)  Second floor is a number of somewhat smaller but still large rooms.  Third floor is probably several hundred classroom sized rooms.  The quilt show used all of the first floor and most of the third floor.  It took us over three and a half hours just to look at quilts and we breezed by many.  The vender area took most of two days.  Hundreds of venders and thousands of attendees (50,000) all interacting on many levels.  We saw lots of interesting things.  Among the many people we met and spoke with were a number who had visited, lived in, or had friends and relatives who lived in Northern California and even Auburn.  All spoke of their experience fondly. 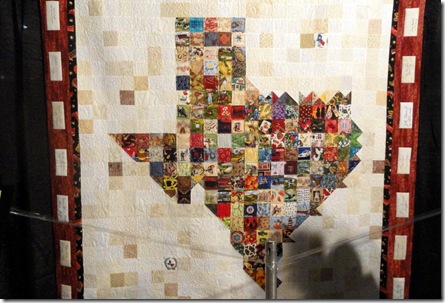 This quilt is more novelty than serious competition.  We have other pictures that I can’t find right now.

One day we took a mid-day break from the show and walked around downtown Houston but we did it in a unique way.  Earlier I mentioned the skyways that connect many of the blocks of downtown Des Moines.  Houston downtown has a few skyways but there is another way to navigate downtown without being on the streets.  Tunnels!  Literally miles of tunnels snaking around under downtown streets and buildings.  The tunnels are not just passageways.  It is an underground city.  There is pretty much everything but a grocery store.  Many food courts with everything imaginable to eat.  Jewelers, dry cleaners, barbers and salons, dentists, physicians, banks, convenience stores, pharmacies, clothing, sporting goods, Curves gym, on and on and on.

The tunnels also lead to the base of several tall buildings.  Here is the view from the 60th floor of the Chase Tower. 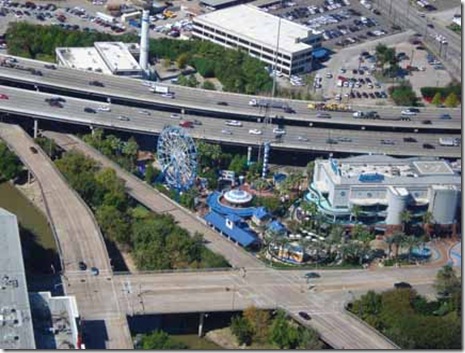 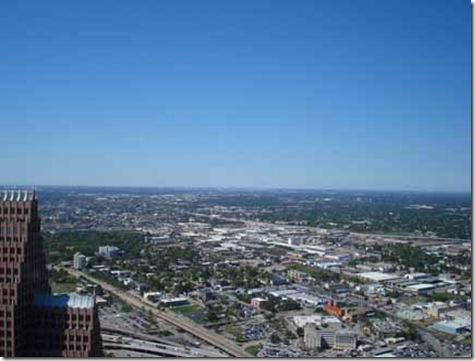 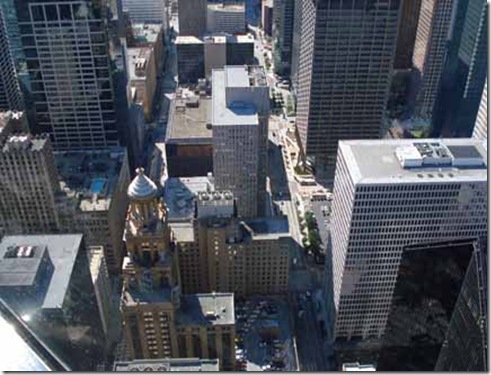