Spent morning at Jamestown Settlement.  Living history similar to Colonial Williamsburg but aimed at earlier time period – the establishment of Jamestown in the very early 1600’s.  John Smith, Pocahontas, etc. (The two were never romantically involved and may not have ever met.) Three living history areas: Indian village, fort, and wharf with working replicas of the three ships that brought the first colonists. As with Williamsburg there are active demonstrations everywhere with period dressed docents explaining many things.  Unlike Williamsburg they are not into living in the time frame so it is a bit easier to interact. In addition to living history areas there is a very good museum.  It traces the area and it’s peoples from before Jamestown to the moving of the colonial capitol to Williamsburg.  Lots of information presented so as to not overwhelm or bore. 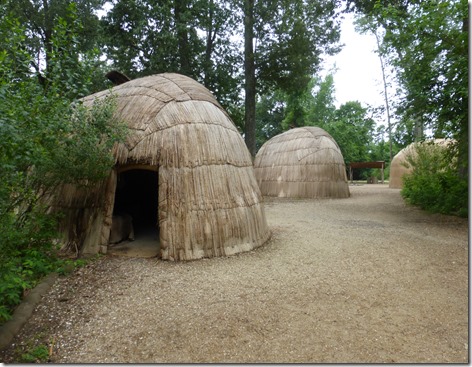 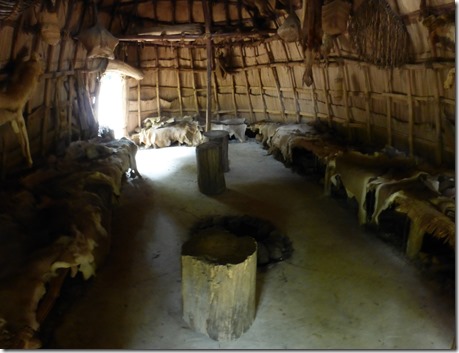 Interior of Indian hut. Pretty roomy ‘till you consider there could be 20 people living in there. 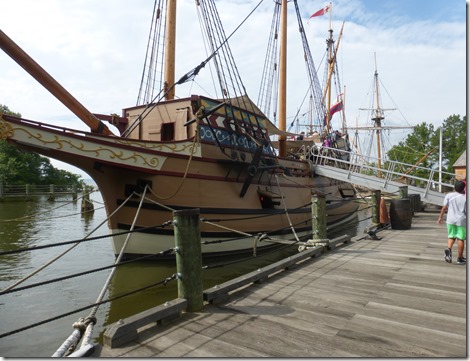 Largest of the three ships that brought the Jamestown colonists. 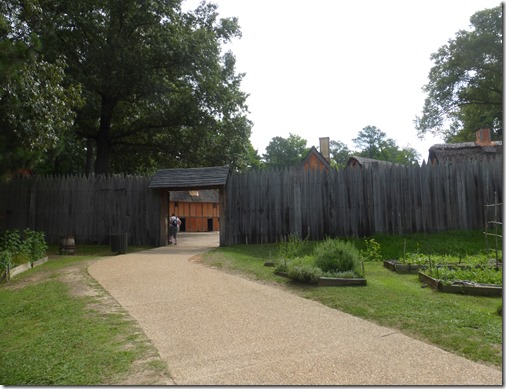 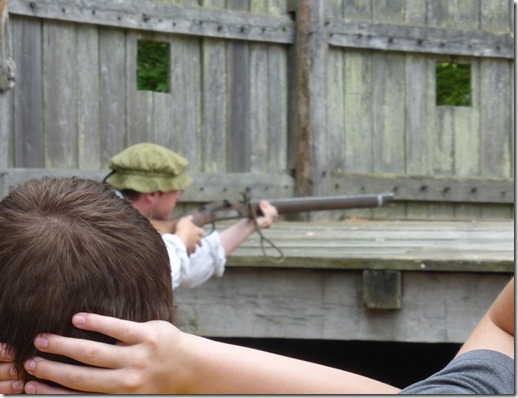 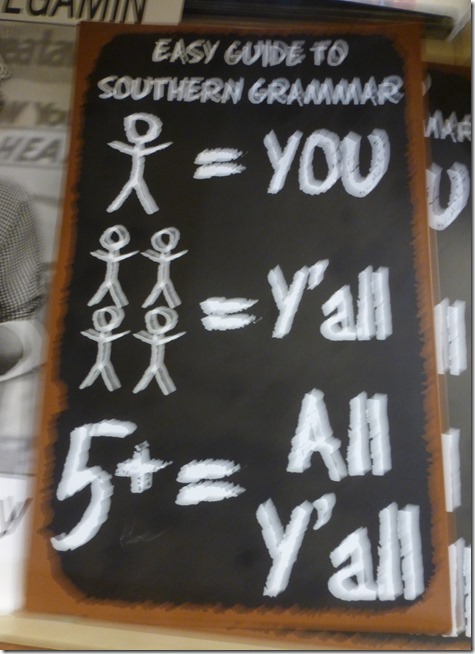 Spent the day at Colonial Williamsburg living history area.  Over six hours of wandering, touring, attending lectures, watching demonstrations, interacting with craftsmen and docents, learning about many things, and walking a lot.  Many colonial era buildings of all styles and uses.  All of them immaculate as are the grounds and many gardens – all of which are open to browse through.  Many character dressed and acting docents all eager to help and provide information.  Spoke a bit with George Washington.  He was portraying the time just before the Yorktown battle seated in the actual room where  some of the planning took place.  Couldn’t talk about being President because that was way in the future. 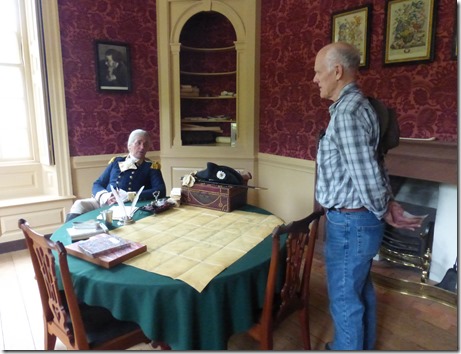 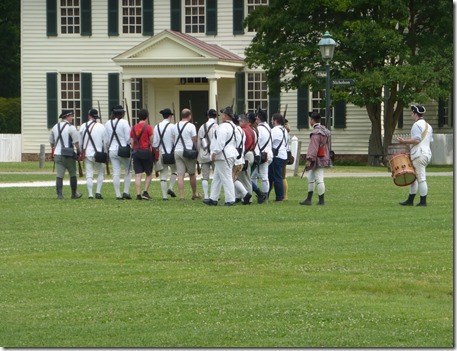 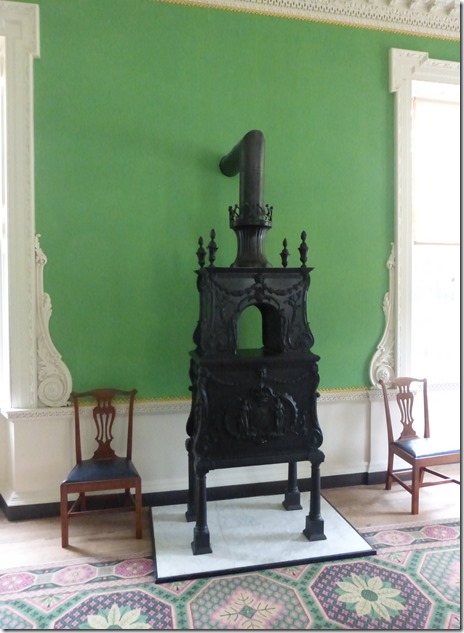 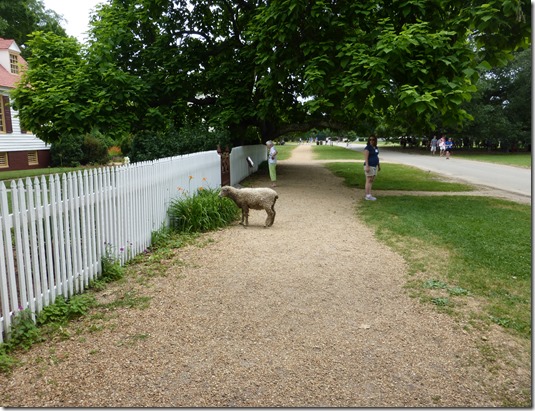 Small flock of these guys were grazing on town green. 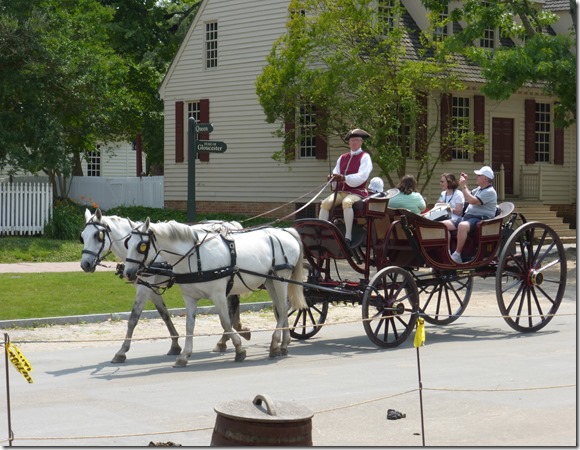 Drove to greater Williamsburg avoiding freeways where ever possible.  Parked carbus and then off to reconnoiter.  Finally ended up at the NPS visitor center for the Yorktown battlefield.  Toured the museum, watched the descriptive video, and drove through some of the battlefield sites.  As with other battlefields we have seen it is interesting to see the dimensions of a battle.  In many cases opposing lines were only yards apart.  Fighting was often point blank or hand to hand.  The final charge that over ran the British at Yorktown was done with bayonets and unloaded rifles.

After the battlefield we drove the town of Yorktown.  Small town, many period style buildings and homes, some actually old.  Lots of tourist style activities and businesses.  Have to work to pick out the history from all the stuff. 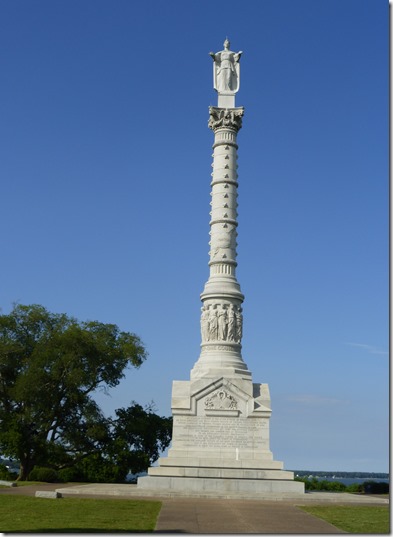 Battlefields aren’t very picturesque.  This is Victory Monument that Congress authorized to commemorate the Yorktown victory that led to end of War for Independence.  Only took 100 years to get it built after it was authorized.  Pretty quick actually.

A day at the home of Thomas Jefferson.

Drove from RV campground to Monticello on small country back roads.  Much prefer that to interstates.  Mile after mile of picturesque Virginia farms separated by deciduous forests.  Bright sun and blue skies.  Fun drive.

Visitor center is about half way up Monticello ‘mountain’.  Purchase tickets and get time reservation for house tour.  Board shuttle to top of mountain.  Spent half hour self touring lower/basement level of house.  This level has a large number of rooms that housed a variety of activities necessary for the functioning of the house and estate.  We have seen buildings with these functions on other estate/plantations but Jefferson designed and built all these functions into a contiguous ‘U’ shaped unit and, using the slope of the hill top, built the back walls into the hill so that the roof was at ground level and did not obstruct the view from the house and gardens.  The base of the ‘U’ runs under the length of the house and includes a tunnel to allow quick and efficient movement of cooked (kitchen was one of rooms) and stored food and beverages to house.

Jefferson was a self taught architect and there is architectural ingenuity everywhere.

Not just architecture.  Science, mathematics, art, music, literature, horticulture, and on and on.  Not to forget politics, diplomacy and running a country.

His mind was always active.  Created a turntable device that allowed him to actively read and refer to five books at the same time.  Created an odometer for his carriage. On and on and on.

Admission includes three guided tours (house, gardens, and life as a slave) in addition to self exploring grounds, displays, and museums.

We spent well over five hours there and didn’t feel it go by. 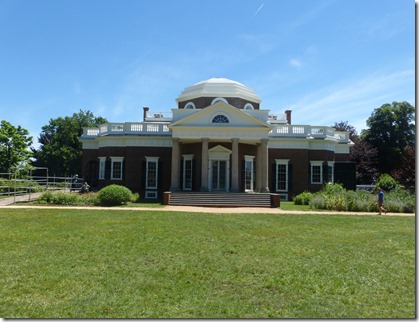 Back of a nickel in color 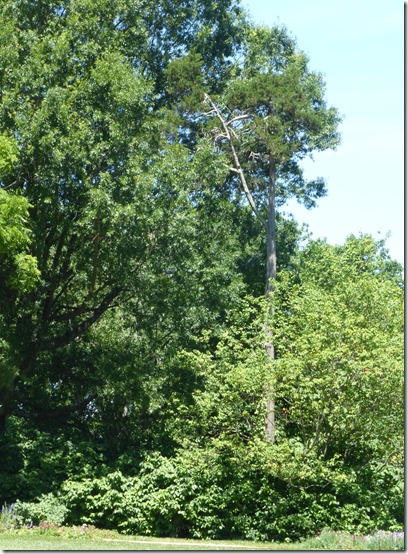 Only tree remaining from Jefferson’s time.  The white spindly one on the right. 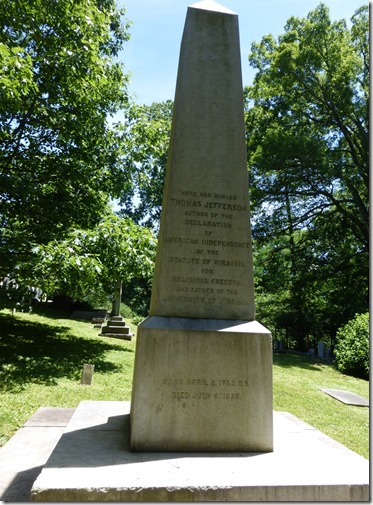 Grave of Thomas Jefferson.  Marker includes the three things he felt were his life's’  greatest achievements.  President of the United States is not one of them.