Chimney Rock National Historic Site is about twenty miles east of Scotts Bluff.   We took the car and drove to it early this morning.  We found that although it is a National Historic Site, it is administered by the state historical society.  They have different hours than the NPS.  We got there over a half hour prior to the opening of the visitor center.  We took pictures and studied information available outside and moved on.

Chimney Rock was a landmark that many of the trails west passed by.  It marked completion of the first third of the pioneers journey. 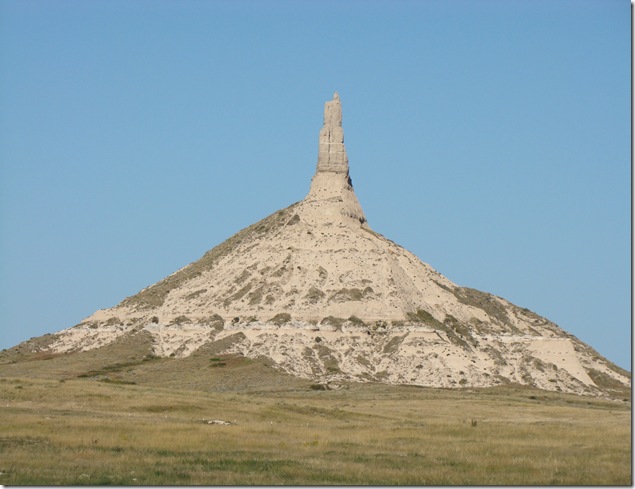 Back to Scotts Bluff to hook up to the carbus and head west.  About thirty miles from Scotts Bluff is Fort Laramie.  The fort began as a trading center.  As the westward movement grew the government needed a location to base their protectionary forces.  They purchased the fort from the trading company and converted and expanded it to a military fort.  The troops were placed there to enforce treaties, find and capture law breakers, and protect Native Americans and migrating pioneers.  Many of the buildings have been restored and the foundations of most of the rest still exist.  There are also interpretive signs with pictures of things as they were when the fort was still operational.  The interiors of the buildings are furnished extensively with furniture, household items, books, papers, and clothing and other personal items, most of which are actual items from the days of the active fort.  It gives a very good idea of what life was like when the fort was occupied.  It was interesting to see the similarities in layout between this fort and the other historic forts we have visited.  All of them are basically set up around a central parade ground which is usually quite large.

We moved on to a campground south of Cheyenne, WY.  Interesting place.  In addition to the RV park it has trail rides, train rides, pony rides for kids, small Farris wheel, two playgrounds, full stables and corrals, chuck wagon barbeques, llamas, miniature horses, camels, bison, exotic birds, fishing, and that was just on our first walk through.

Tonight we got a special treat.  There is a huge bank of clouds to our south and we have been watching a nonstop electrical show for over an hour.  Lightening of every kind.  Cloud to cloud, cloud to ground, isolated, full sky, jumping through clouds and then to ground.  Too much to describe.  Sue took some video and I will try to get some stills from it. 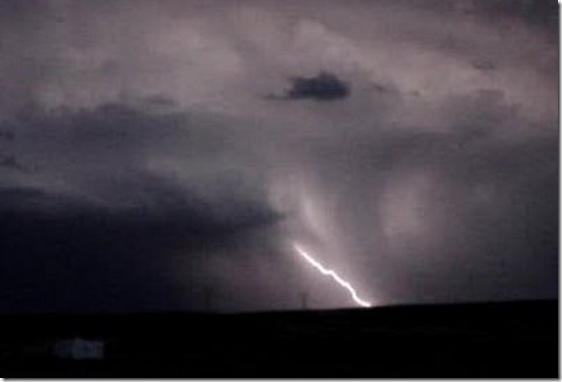 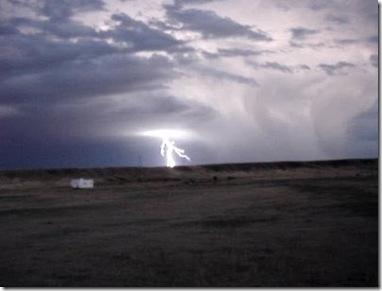 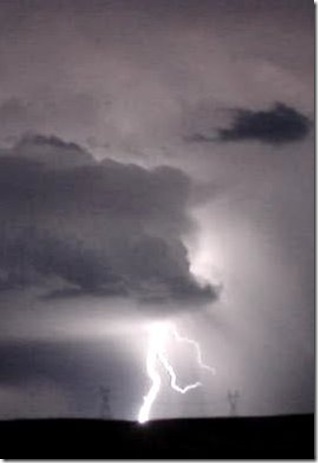 Agate Fossil Beds National Monument is a remote spot in northwest Nebraska.  The interesting thing about this spot is that not only were entire fossil skeletons found virtually intact but the area was pretty much a bone yard as though entire herds had perished in the same area at the same time.  Fossils from here are on display all over the world.

South to the city of Scotts Bluff where we parked in a nice city park campground.  Once situated, we toured to Scotts Bluff National Monument.  This is a huge sandstone formation that was a landmark for Native Americans and for pioneers traveling the Oregon Trail.

Scotts Bluff as pioneers saw it. 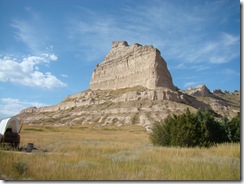 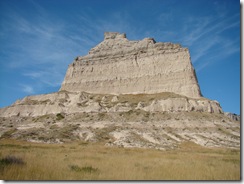 Oregon Trail.  Cut in foreground is result of hundreds of wagons passing over the same place followed by erosion. 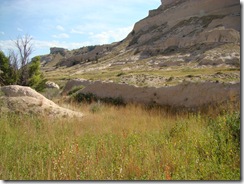 Cut in lower picture is spot referred to in upper picture. 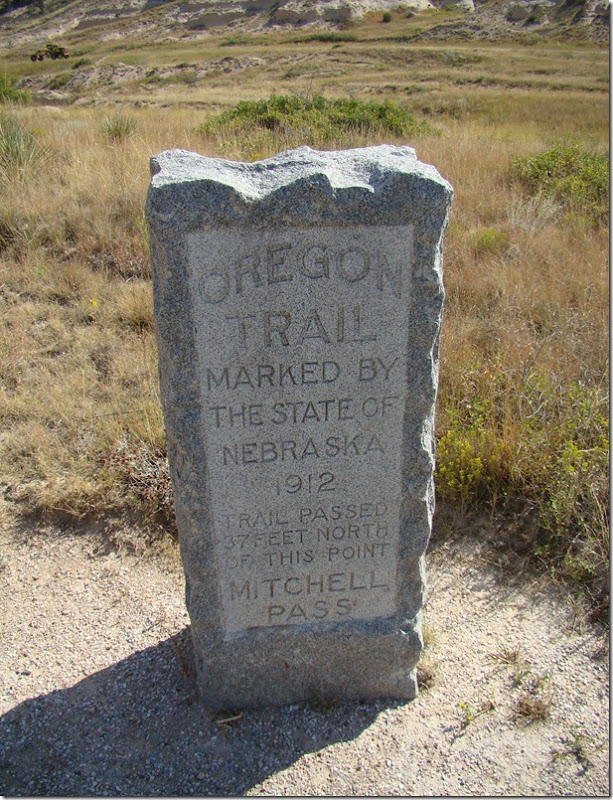 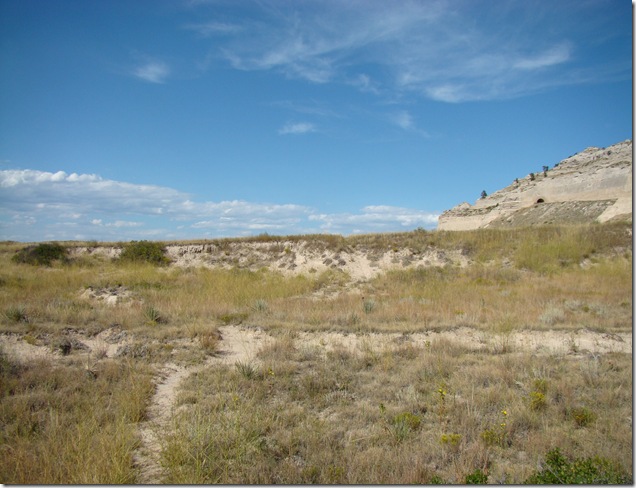 View of Oregon trail from atop Scotts Bluff.  Trail passed just above where buildings are now. 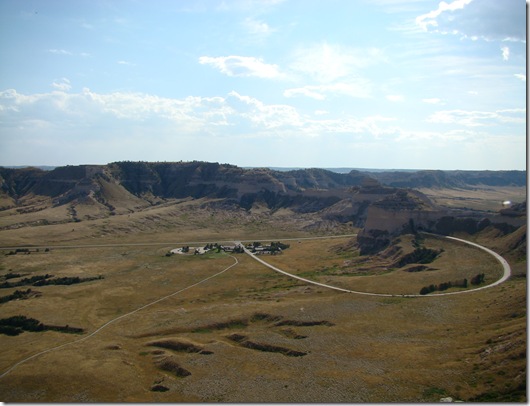 This is a survey marker that was placed in 1933.  At that time the top of the marker was flush with the ground.  Picture shows how much erosion has occurred since then. 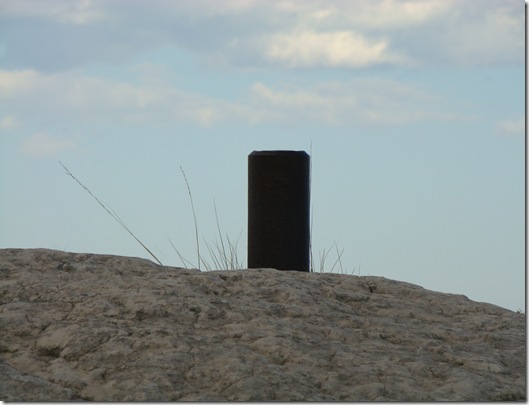 Wind Cave National NP was only fifteen miles south of our campground so we got there in plenty of time to sign up for the first tour of the day.

Ranger pointing out natural entrance.  We entered through larger manmade opening a few feet away. 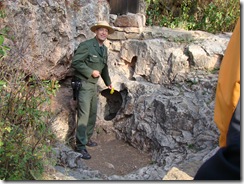 Wind Cave is the fourth longest cave in the world in terms of mapped passages.  Fourth largest in the world but second largest in its’ own county because of Jewel Cave a few miles away.  Wind Cave  is somewhat different in that most of the cave is located within a one square mile area which means that there are many layers and many, many inter-connections.  This cave has a unique formation called box-work. It is all over the cave. 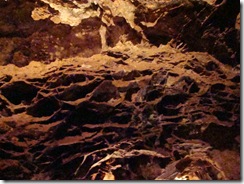 With most caves the cave decorations form after the cave is formed.  The formations are laid down over a long time by evaporation of dripping water leaving deposits of various shapes (stalactites, stalagmites, flow stone, ribbon, straws, etc.  Box work is different.  Minerals fill cracks in the ground and solidify.  The ground around the filled cracks then erodes away (as with all caves) leaving the solidified cracks behind. 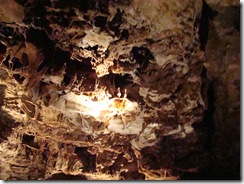 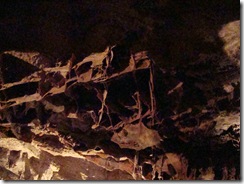 Wind Cave is a pretty dry cave so none of the traditional cave furniture has formed. Wind Cave NP above ground has wild life.  Driving in we went by very large herds of buffalo.  Far more animals per acre than Custer SP just north of it.  It shows.  The land looks over grazed.  The concept of letting nature alone is fine if the space is unlimited.  It is not.  The National Park Service needs to do a better job of managing the herds to protect the animals well being and protect the land.

From Wind Cave we headed south to the Black Hills Wild Horse Sanctuary. 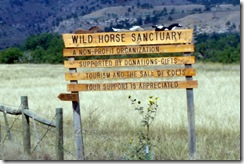 I have wanted to visit here for twenty years.  It being 1500 miles from home made that not practical ‘till now. I have known the founder of the sanctuary for over 55 years.

Here is Dayton ‘Hawk’ Hyde working with a colt to gentle it so it can be turned over to the buyer. 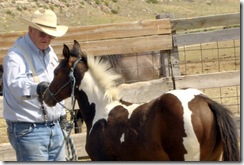 My brother and I spent many summers while we were growing up on a ranch he and his wife own in Oregon.  The sanctuary is 17000 acres in southwestern South Dakota.  It is home to hundreds of wild mustangs who are free to roam the land much like they did  years ago.  There are even descendants of the first Spanish mustangs on the sanctuary. 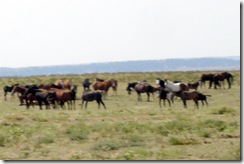 We got a nice tour of a portion of the ranch and some of the many historical sites.  There are sacred Native American ceremonial grounds and historical areas as well as several homestead sites.  There are areas of petrified forest and areas of fossil beds.  All this in some very beautiful country. 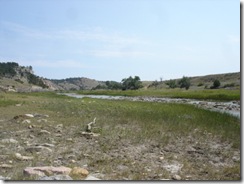 Quite a place.  We had a good visit and spent the night parked in their mini RV park.  They have about seven sites for volunteers to park their rigs.  The sanctuary is a non-profit organization that relies a lot on donations and volunteer help.  To help fund the operation they also have horses and colts for sale and run some cattle.  It was fun to see a place I had wondered about for a long time and would consider returning for a while to do some ranch work.

Little Horse on the Prairie  :) Sort of a slow day.  We still had the southern half of Custer State Park to see.  This is a VERY large park and all of it is beautiful.  And the terrain is not all the same.  The northern part is sharp hills and valleys.  The southern part is mostly rolling plains with gentle valleys lined by trees.  This is ideal wildlife habitat.

First stop was a fire lookout.  Here is a view of Mount Rushmore from very far away. 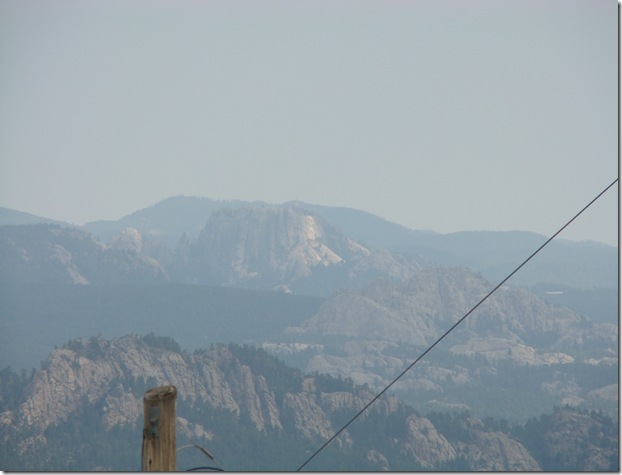 We started south and spotted our first lone bison for the day.  Shortly after we went through large groups of bison on both sides of the road.  A bit further on we met some burros – up close. 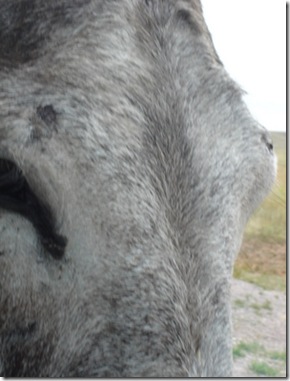 In this one he is scratching his shoulder on the outside mirror. 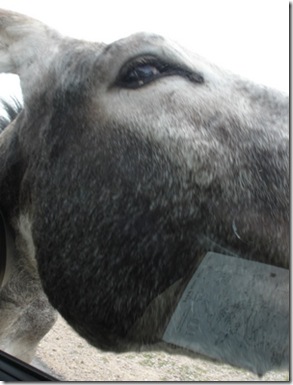 These beasts would climb in the car if you let them.  After that we drove through miles of pretty country but no more wildlife.  Near the southern end of the park we came to the Buffalo Corrals.  This is where they hold the buffalo during the roundup.  The herd is checked for health and about a third of the herd is separated out to be auctioned off.  This keeps the herd at a healthy size for the land. 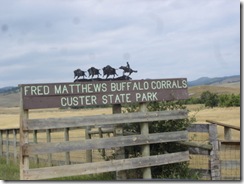 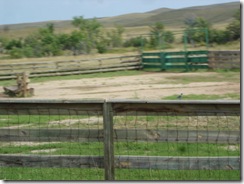 Just past the corrals we went by a group of six or seven pronghorn. 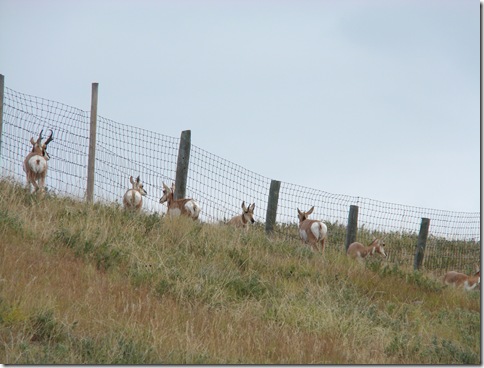 The rest of the loop was pretty but no more wildlife.  The park has four lodges and we briefly toured each of them.  Had lunch by a pretty lake and then back to RV park to get ready for tomorrow.

We have a friend who says that if she could live anywhere she wanted without other commitments that she would choose the Custer, SD area.  I can see why.  Winter might be a bit tough the whole area is beautiful even in late August.