We spent Tuesday night in a service bay of RV Glass Solutions so that the motorhome did not move while the the cement cured. Up early so we could clear the space for the next wave of repairs. Wednesday morning we headed north on I 5.  Eclipse traffic was over but commute traffic was in force and thicker as we reached Portland area.  Across the Columbia River to Vancouver, WA and parked at an Elks lodge.  Spent the afternoon and evening visiting with friends from Air Force days.  We visited them in Alaska several years ago and they had subsequently moved to Washington.

Thursday morning we headed up the Columbia River, through the gorge and on to eastern Oregon and then across the river to the Tri-Cities area in Washington. Parked and set up the Carbus in front of the home of friends we have known since Scouting in Palo Alto over 60 years ago.  Great visit!  Some sightseeing, delicious meals, and almost nonstop talking and reminiscing for over a day and a half. We should visit WA more.

This morning we will go to Spokane.

Early drive south to Coburg Oregon.  RV Glass Solutions is THE place to get RV windshield replacements.  Will not go in to detail but if questions get in touch.
While windshield was being replaced we drove north to Salem.  Here is what we did:
http://thedestinators.com/2017/08/22/salem-an-opportunistic-rendezvous/#more-3133
Thanks Sue and Doug for excellent description of the day.  Much better than what I might have come up with.  It was fun.  Sorry we are 3000 miles apart.  Happy Trails! 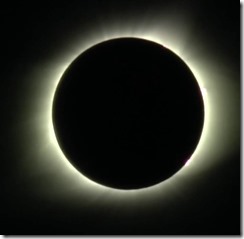 Got colder.  Saw stars. Saw above with naked eye. Crescent shadows under trees before and after totality.  360 degree twilight.

Pretty cool.  Very worth the effort to see.  There will be an even longer one in Northern California in a few years (decades).  Buy property in Susanville now.

After three great days at Yamsi Ranch visiting and helping with some projects we are now in the the RV park in the Benton County Fairgrounds in Corvallis,OR. There are probably several thousand people camped in and around this spot all waiting to experience a minute and twenty seconds of darkness.  Pretty peaceful and quiet here. Other parts of the state are much more zoo like.  Tens of thousands of people, gas and food shortages, clogged roads.  Sun is up and it looks like we should have a decent view right by the carbus.