We rose early, showered and dressed, buttoned up the carbus (with the A/C ready to kick in), and headed to Sky Harbor Airport (kind of a neat name for an airport).  The Phoenix airport is huge.  It has four terminals, each with three levels.  The terminal we were in had a city worth of shops BEFORE the security area.  It had another city worth AFTER the security area, and each concourse had a towns worth.  Dan was flying from Sacramento and our planes were landing within minutes of each other.   He had a rental car reserved and we  would all go to San Dimas together.  Just before they closed the door on our plane (cell phones off) we get a call from Dan.  Sacramento is fogged in.  Fog in May!? He will be an hour late or more.  Just just before the door is closed we go to plan B.  Ken, Julie, and the kids spent the night in Pomona which is about 20 minutes from Ontario airport.  Quick call to Ken to explain situation.  He will meet us.  He was there when we arrived and took us to their hotel were we waited while they finished dressing.  The church was only 10 minutes from their hotel so we were there in plenty of time to mix with family and friends prior to the service.

Attending a memorial service is not my idea of a fun day.  I have been to a number of them and I know there will be more.  My only regret with Judy’s service is that Dan missed most of it because of the flight delay.  Judy was not famous.  She was not overly active in civic or community affairs.  She was not a busy business person.  What she was was a good and loving lady who never saw bad in anyone or anything or at least did not acknowledge it.  She always had a kind word and a smile for everyone. And a hug. Even in the midst of her horrible affliction she was always upbeat and supporting others.  The good sized church was overflowing.

The minister, a nice and compassionate woman said many nice and comforting things but most of what she said was fill and reflection on the main parts of the service, a letter from Hank to Judy (written after she died) and thoughts from Judy to her family and friends written in the weeks before she died.  Nothing could be more poignant.  Hank is not a man of many words.  His reflections were so real and so touching that there was not a dry eye in (and outside) the church.  Judy’s reflections showed that even near the end of her life her thoughts and concerns were with her family and her many friends.  Liz, Hank and Judy’s daughter created a slideshow of memories.  Full of happiness and joy but also nothing held back.  There were photos taken days before Judy died.  Weak and pale but still smiling.

In describing Hank and Judy’s relationship and marriage of over 35 years, the minister said it was the closest thing she had seen to  a deep and eternal love.  It is true.  You could see it every day in their lives and Judy’s passing is just a blip.  They are still together and will always be so.  I’m not one to think such thoughts but in this case I truly believe it. 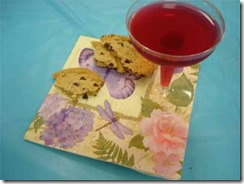 Late in the afternoon we returned to Ontario airport , this time with Dan.  His plane left a little earlier than we did so we saw him off and walked to our gate and right on the plane.  By 8:45 pm we were back at the carbus.

Judy lived her life filled with hugs and hope and that was the message her family gave to all at her memorial.  Hug someone (better-hug several ) every day and never give up even in the worst of times.

Judy told her family she would be watching over them and checking in from time to time so if you see a dragonfly, embrace the moment.  It just might be Judy telling you things are OK. 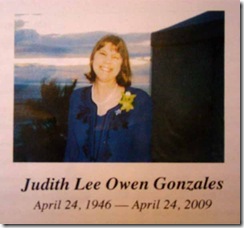 We left Organ Pipe early so we could do our traveling while cooler.  Couple of hours to RV park to stash the carbus and then on to Casa Grande Ruins.

Interesting.  Other ruins we have seen have been on a hill or in a valley or in a cliff cave.  This is in the middle of a flat desert.  Things were wetter 800-900 years ago.  Also, other ruins have been of stone or based of stone.  This is entirely mud and sticks.  Attempts to preserve it came none too soon.  Much of the village structures have washed away.  The large building is a small part of what was a very large complex. 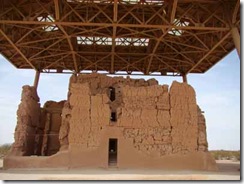 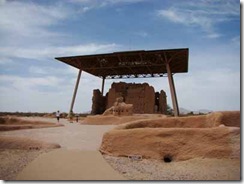 The Sonoran desert, especially around Organ Pipe Cactus NM has the most variety of plant and animal life of the four great north american deserts.  One plant we have seen a lot of is the ocotillo.  It has long straight VERY thorny branches.  Because they are long and straight they are used for everything from ramada(shade structure) roofs  to fences (natures barbed wire).  The plants way of surviving the desert is to have no leaves unless there is water.  It then sprouts leaves while things are moist and then drops them.  Until today all we had seen were dry sticks.  Today we saw leaves.  The whole desert around Casa Grande  is agriculture  thanks to irrigation from wells (another story). There must have been enough moisture around for the ocotillo to make leaves.  Fun to actually see what we were told happens.

Plant on right in first picture is most common way it is seen. 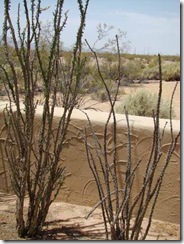 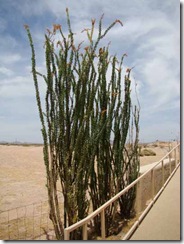 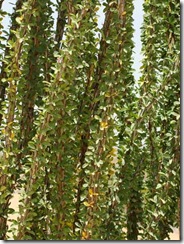 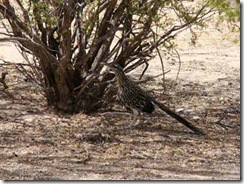 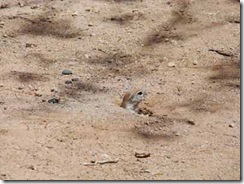 Later in the morning we drove the Ajo mountain loop road.  Sightseeing and desert information.  Sue took a picture of every cactus.  Not every kind of cactus, every cactus.  Just kidding – a little.  Very pretty drive.  Twenty one miles long takes two hours or more.  Lots to see and learn.

After the drive we went to the visitors center and did a geocache.  Also did one during the drive.

The rest of the day is staying cool as we can.  Tomorrow we head north some.