Our travels include visits to quilt shops if we happen across them.  (I don’t make her go to every Home Depot we pass though) If the shop is nationally known or has some other draw we might make a special effort.  This summer there is a program, now national, whereby individual shops design small sampler quilts and hand out the pattern or sell a kit with pattern and materials. It is a way to draw people into each store that participates.  It is a way for Sue to add to her archives and see different stores in different locals. Yesterday and today were directed toward this effort.

Lancaster County = Amish country.  Amish = hand quilted of all shapes and sizes.  Per square mile there are probably more quilt and fabric stores than anywhere else in the country. A number of them participating in the pattern hand out program.  Obvious quest.  Just visiting quilt shops seemed rather narrow so we looked for something to broaden our travels.  Lancaster County has 25 historic covered bridges and there are five driving tours to visit them.  We coordinated a couple of those tours with quilt shops on her list.  Serendipity held again today.  We visited on quilt/fabric store that I (and Sue agrees) would rate overall well above both Paducah and Hamilton. (Those places and the stores in them will mean something to quilters. For everyone else it doesn’t matter much anyway.) 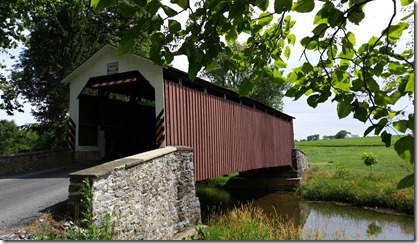 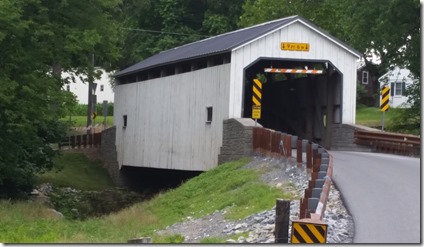 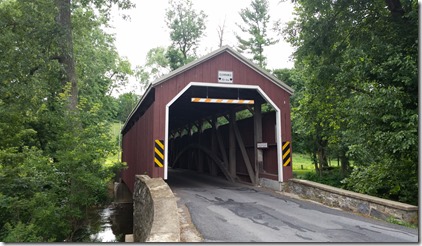 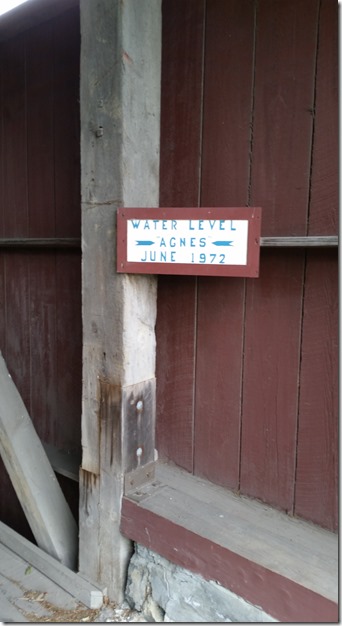 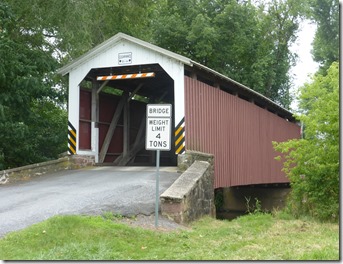 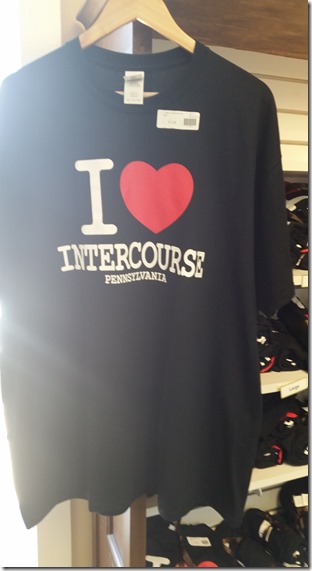 Clean your thoughts people.  This is a real place complete with post office.

Several years ago, after years of trial and error, Sue found a shoe that worked for her functionally and comfortably.  When she put them on they fit, were comfortable, and she could walk all day doing everything but rough trail hiking.  The brand is Sketchers and the model is Go Walk.  Only that model fits her well.  The shoe is not readily available.  A couple of times we have sought replacements by going to Sketcher outlets.  That in itself is pretty daunting.  The stores are very large and there are literally hundreds of models on display.  And only one model/style will work for her.  One visit the store did not have her model in a huge store of Sketcher shoes.  Another store had her shoe and one pair in her size.  We got it obviously.  About a week ago we were talking about how we were going to find a Sketcher store as she was starting to feel like her current shoes would need replacing.  We put it on our list of things to watch for on our wanderings.  Later that same morning we stopped at Costco to fill the carbus with gas.  Sometimes when we gas up we will park and wander the warehouse to see what items are featured in different areas of the country.  We did that today.  As we walked toward the back, on a whim, I wandered over to see if they had shoes I could wear as I needed a backup pair.  Next to the men's sneakers were the current woman’s shoe they were carrying.  Sketcher Go Walks!  Stacks of them! Two colors! Full range of sizes!  She got two pair. I also found comfortable sneakers for my backups.

Yesterday we drove the back roads of Lancaster County, PA in search of a few quilt shops

.  Traveling along one road seemingly in the middle of nowhere when the road became a bit more congested and there was a large parking lot with carnival rides set up presumably as part of July 4th weekend celebration.  Behind the large lot was a large building.  To the right of that building was an even larger building with a huge parking lot behind it.  Beyond that lot was another huge building, this one two stories. The lots were quite full.  We pulled in to investigate.  The first building was a ‘department’ store but much more.  Clothes, fabric, hardware, furniture, appliances, dry goods, home goods, toys, gifts, and much more.  Pretty much everything one would to need to live comfortably except food.  That was handled by the second building.  A HUGE supermarket. With class.  In the Sacramento area I guess Nugget Market is the example of an upscale market.  The Nuggets I have been in can not hold a candle to this place in size and services.  Several butcher and seafood counters with everything fresh packaged or packaged to order.  Deli counters, each over 100 feet long, fresh cutting deli meats and cheeses, foreign and domestic.  Two active bakeries.  All baked goods were fresh – nothing baked off site.  Literally acres of canned and packaged goods.  To speed check out, there are several stations where produce from a vast varied selection is weighed and marked with the price.  I know many markets have personal customer service but I have not seen it to this size or level. The third building, also acres in size, is a smorgasbord/gift shop.  The lower level is gifts, toys, cards, trinkets, souvenirs, and on and on.  Even a separate quilt store with hand quilted items.  Aisles and aisles of each type of item.  One could spend hours just wandering that store.  The upper level smorgasbord is again huge.  The dining area is probably 200’ by 250’. The food line is over 200 feet long.  Separate carving station with multiple types of meat.  Separate grilled fish station with four or five different types of fish.  Separate bread station with ten specialty breads in addition to rolls and buns.  It was Friday and one of the added food line items was crab cakes, something Sue has been searching for the whole time we have been on the coast. Deserts included over ten different kinds of pie, multiple types of cheese cake, puddings, fruit, jellos, cakes, cookies, soft serve of different flavors, and more. All of it constantly fully stocked. In two months on the road we had not yet eaten out.  We did last night.  Will not need to eat at all for a few days.

Never know what you’ll find when you are not looking for it.

Ellis Island and Statue of Liberty

Up early and short drive around marina to Liberty State Park.   Park is interesting in its own right as it is the site of the old railroad terminus for all rail lines that came in from the west and south.  From there passengers took ferries to NYC.  The train depot has been restored and a small part of it serves as ticket booth for ferries to Ellis Island and Statue of Liberty.  Mostly it is just a great big empty room.  Kinda like Grand Central only empty.  Outside is the covered terminus where 15 or 20 train tracks terminated.  The signs indicating the towns and cities served by each track are still there.  Sort of nostalgically spooky. 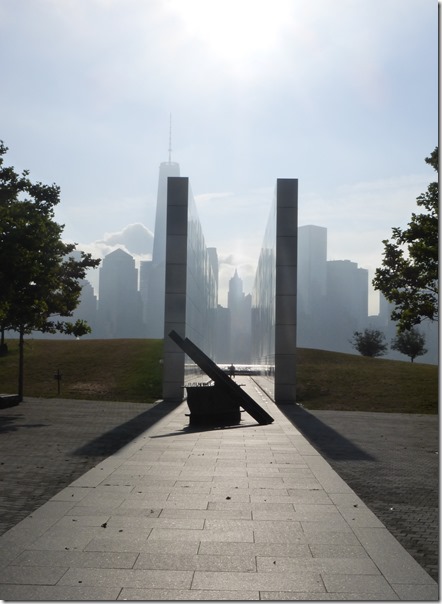 Went to Will Call and picked up tickets we reserved four months ago.  Then out to ferry landing and our first security stop of the day.  On to the ferry (first of the day) and a ten minute trip to Ellis Island. 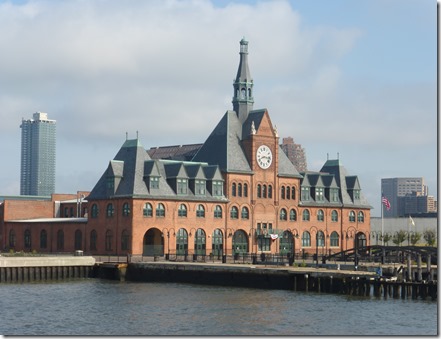 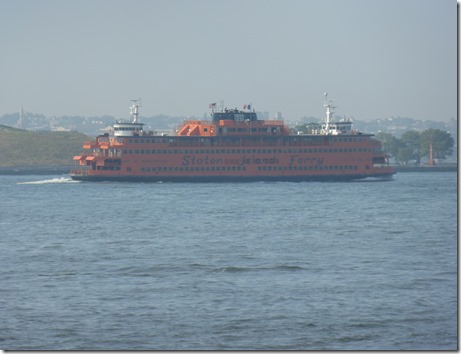 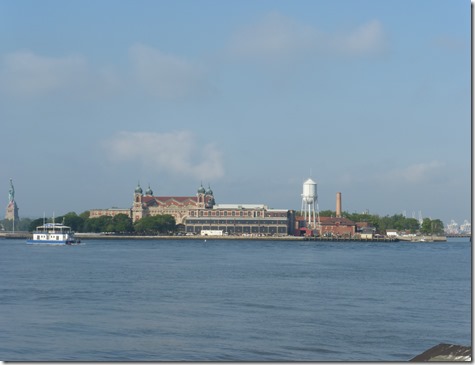 Ellis Island.  Did not know what to expect.  Knew vaguely what it was but not the full picture.  My impression of Ellis Island – Wow!  Very well restored and filled with displays and information that do a great job of teaching much about immigration from as far back as the 15th century.  Seeing the building and actual spaces that millions of immigrants passed through entering this country and learning what what they left and went through to get here pretty much on hope and faith alone is pretty humbling.  Many made the journey from Europe to America with empty suitcases so others would not think they were totally destitute. 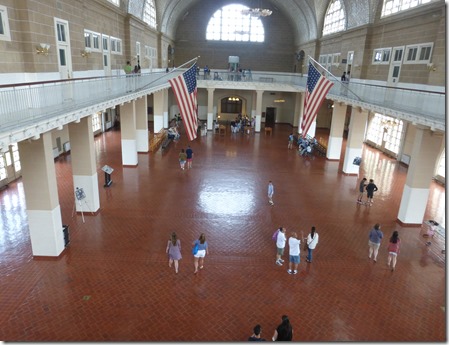 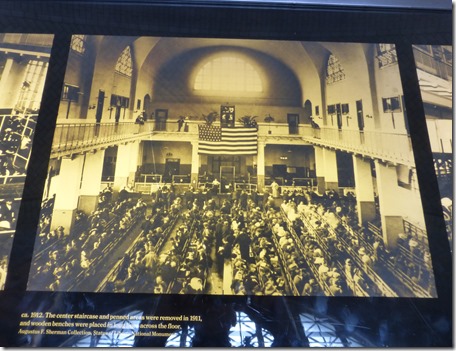 Great Hall in use.  Over 5000 people a day went through here.

It is a shame that Ellis Island is so difficult to get to.  Many more should be able to learn its lessons.  Added interest item for us today.  There was a special section devoted to the life and achievements of John Muir.  Very well done tracing of his life. 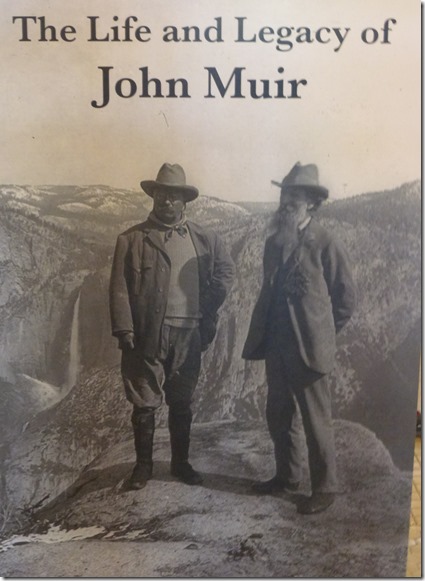 Another 10 minute ferry ride to the Statue of Liberty. 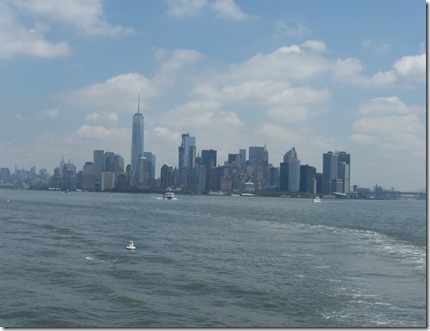 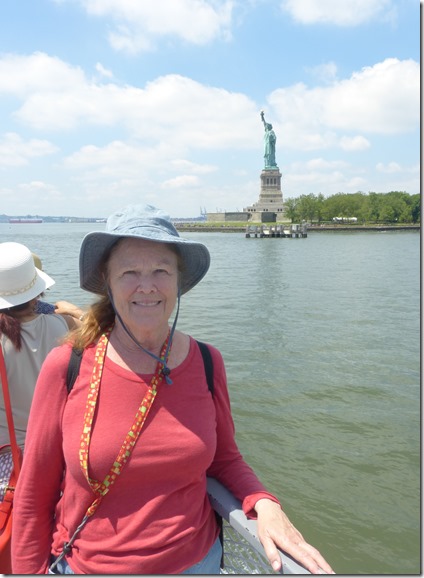 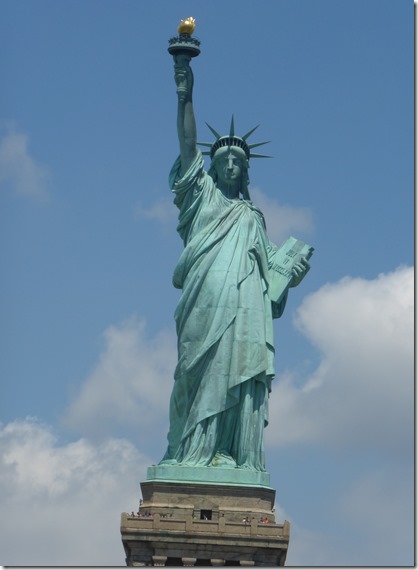 Worked our way over to security tent and went through another screening – this one even more intense.  Out of security and into the base of the pedestal. From there we began the reason we made reservation four months ago – a climb to the statues crown.  Only 377 steps, half of them on a tightly wound spiral staircase. 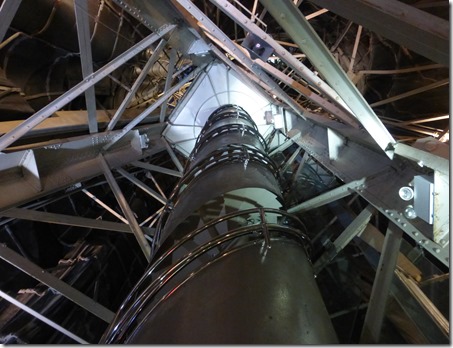 Stairs are on inside of railing.

Only 500 slots are allotted each day to climb to the crown out of tens of thousands of visitors each day.  Even applying as early as we did we still had to shuffle dates a bit.  Climb was not bad.  We paused a couple of times at landings as do most but made it in good shape. Sue says it was much better than hike to Delicate Arch. 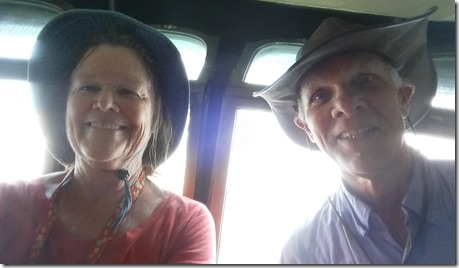 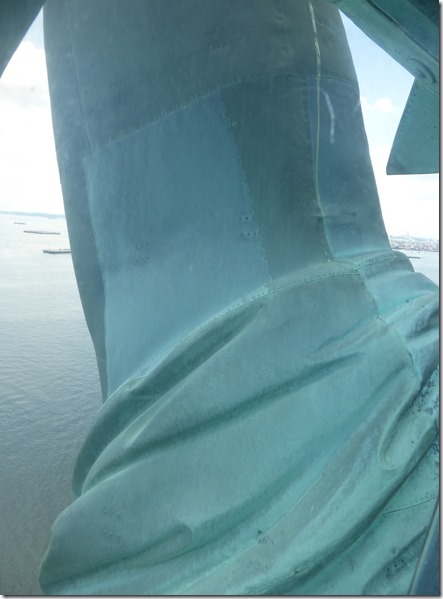 Arm from inside crown

Had a nice visit with two rangers stationed in the crown,  took pictures from the limited view spots, and back down the staircase to tour the very good museum in the base. 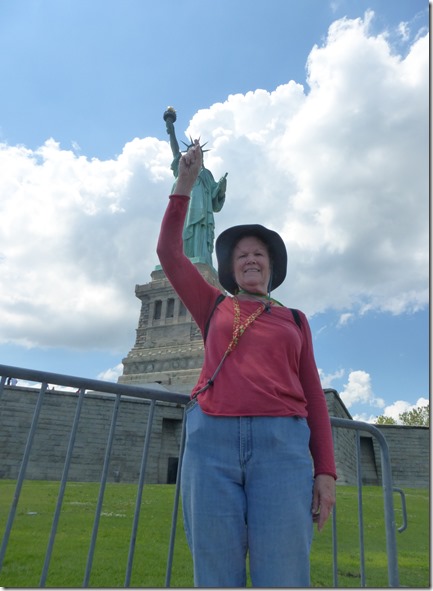 Sue pointing out where she had just been.

Stroll around the grounds taking pictures of New York harbor landmarks.  Had lunch – first we have purchased and back of ferry for 15 minute ride back to Liberty State Park landing. 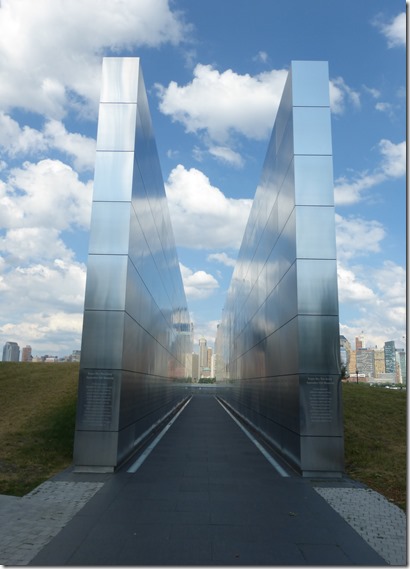 Empty Sky Memorial in the afternoon.  I kinda like this one.

If you want an exercise in road navigation look at a Google maps blowup of the interchanges between the freeways, expressways, turnpikes, and roads that come together between Newark and Jersey City.  It literally looks like a plate of spaghetti.  Three navigation devices, maps, lots of prior study, real time observation and some luck got us through it all and to our destination RV park in Jersey City without a hitch.  Spoke to some later in park who missed a turn and took a LONG detour.  Hope our exit goes as well.

This morning we drove west about 25 minutes to the center of New Jersey to Whitesbog.  Most people know that cranberries are grown and harvested in bogs.  Wild blueberry bushes seem to thrive along the edges of these bogs.  Wild blueberries are usually pretty small and may lack in the taste one usually thinks of with blueberries.  Whitesbog was the home/farm of a farmer who raised cranberries.  His daughter, Elizabeth White believed that blueberries could be developed into a commercially viable agriculture product.  She and a USDA botanist spent years identifying wild plants with the most desirable properties and crossbreeding to develop a number of new varieties of blueberry.  The first commercial crop of blueberries was harvested and sold out of Whitesbog in 1916.  This is the 100 year anniversary of the blueberry we know today.  For the last 33 years Whitesbog has had a festival.  Down home crafts, music, food, entertainment, hay rides, history, ice cream, and Blueberries! Small town big fun. 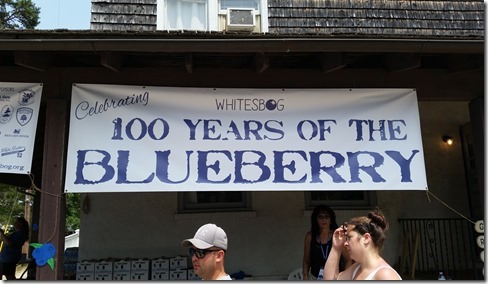 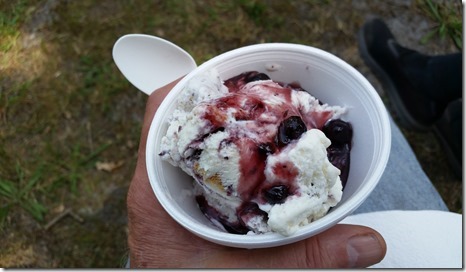 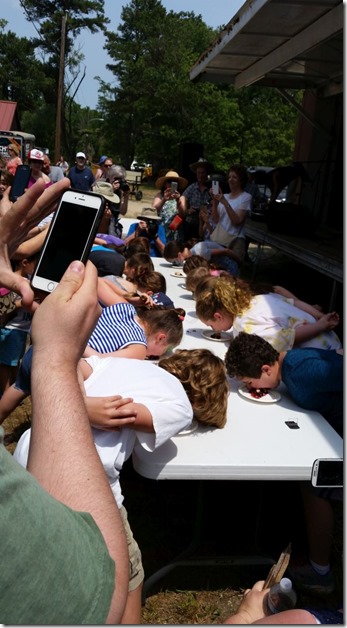 The best type of pie for pie eating contest 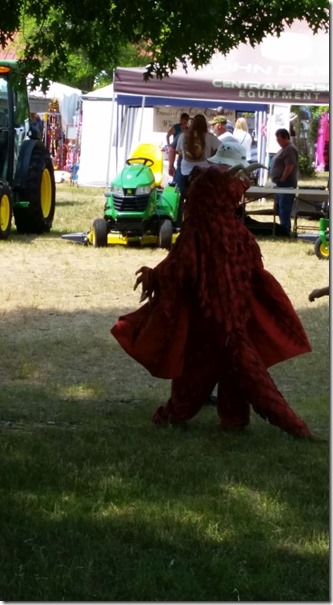 Either too many or not enough blueberries.