Started our day with a visit to a cheese factory in the middle of Ohio’s Amish country. 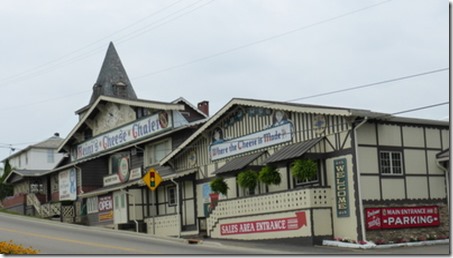 ) who gave us a personal tour and description of the entire process.  Would have been nice to see the operation real time but he gave a very good description of how cheese is made. 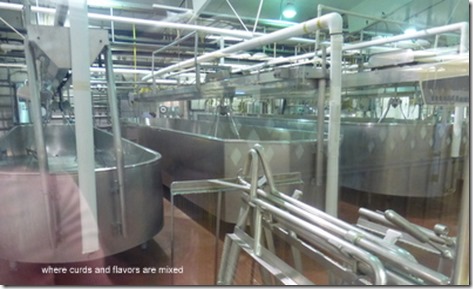 Associated with the cheese plant is a large store and gift shop.  That factory makes over 40 kinds of cheese and every one of them was available for tasting. 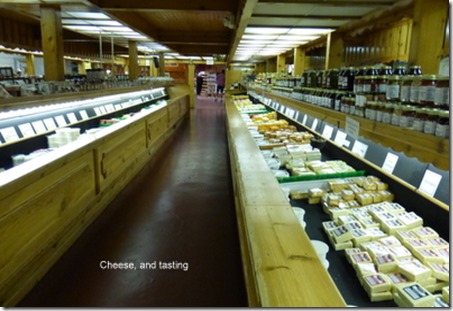 Many different and distinctive tastes.  Prices were not bad either.  Across the street was an Amish bakery with a large variety of very tasty looking baked goods and very reasonable prices. 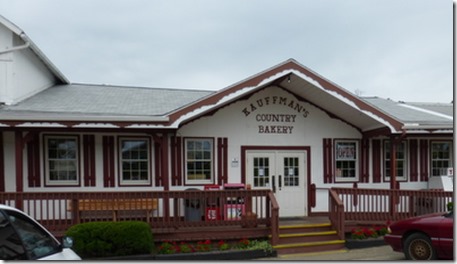 An observation on Amish in Ohio.  In Indiana the Amish we saw seemed to follow quite closely the Amish ways and traditions.  They blended in with ’Englanders’ in many ways but there were no blatant displays of commercialism and most of their productivity was farming related.   They were also very friendly to interact with.  The town in Ohio where the cheese factory and bakery are located looked like a tourist trap with an Amish theme.  Lots of restaurants and gift shops Lots of tourists stumbling over each other.  Most of the stores were run by Amish – mostly women (the men probably working on farms).  The cheese factory was mot making cheese but there were a number of Amish young women at work in the store packing cheese and stocking.  The thing that struck me was their dour attitude.  They went about their tasks and acted like there were no other people in the room.  You could look at them and smile and get no response.  The sales clerks were pleasant and friendly as was the tour guide but every one else we saw acted quite standoffish.

The country itself was very Amish.  We saw several hay fields with hay drying in many small haystacks.  In one field the hay was being collected by hand pitching the stacks on to a large flatbed wagon being pulled by two large horses.

Many buggies on the road and parked in parking lots. 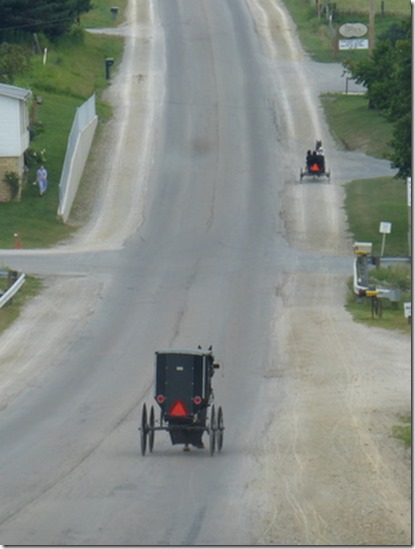 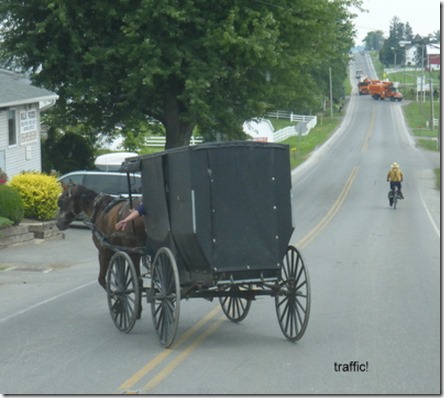 We passed an Amish station wagon.  Buggy with two little girls and mom in back looking curiously out the back window at the carbus and dad and son on the front seat.  Also saw several Amish related industries.  Several good sized buggy shops and many furniture works.  Amish are known for fine woodworking. 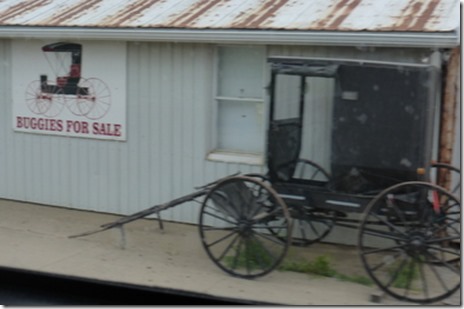 From Amish Country it was on to Canton.  Home of the National Professional Football Hall of Fame and place where professional football began. 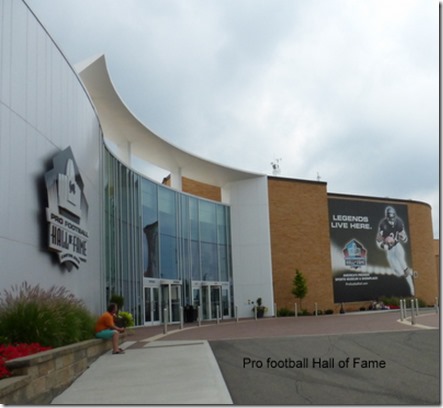 The hall of fame is very well done.  Lots of interesting displays both static and interactive and good flow of information so there is always something new to look at. 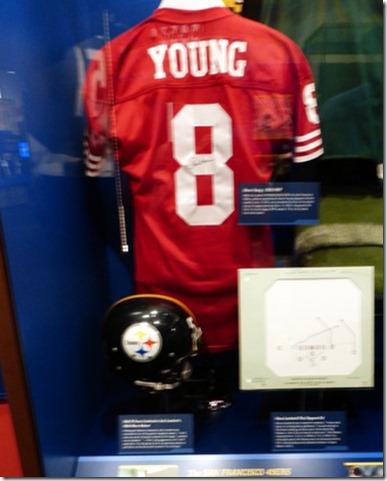 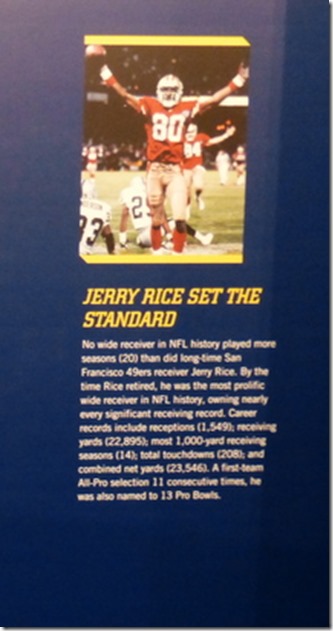 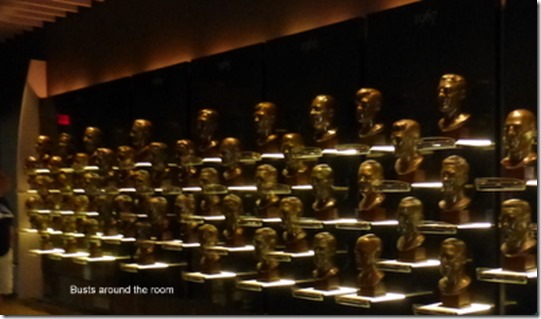 We spent over two hours touring the hall.  As we finished the displays and were about to go through the gift shop there was an announcement.  The Canton area was in a tornado warning.  When we entered the hall the sky was partly cloudy.  They moved everyone in the building to the basement.  It is a large building and there were a lot of people in it.  So our tour was extended by a 45 minute stay chatting with several employees who shared a corridor with us.  Turned on my cell phone to check on the weather and got a weather alert as soon as I turned it on.  Pretty cool.  When we left the building after the warning expired the ground was very wet but the skies were again clear.

Quick stop at Costco to replace Sue’s camera and Sam’s Club for some food basics and then east.  Goal for the day – Longaberger Basket factory.  We got there at 12:45 and found we missed the last factory tour of the day by fifteen minutes – and – they were closed tomorrow.  But, there was an alternative.  If you can’t watch then do.  On the grounds is a building where you can make your own basket – under the watchful eyes and instruction of a seasoned basket maker.  And on Tuesdays the second make-a-basket is half off.  We each made one.  Everything is set up so it is pretty straight forward especially with expert guidance.  the man helping us has been making baskets for 22 years.  Fun souvenir if a bit pricy.  Still it ended up costing about 60% of a retail Longaberger basket would cost and we made them. 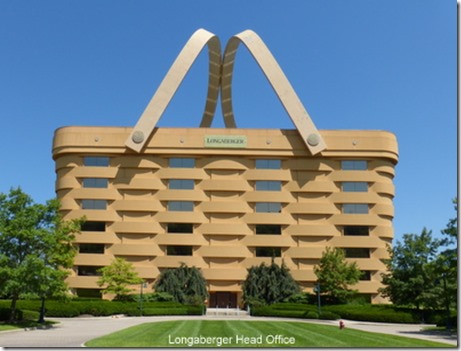 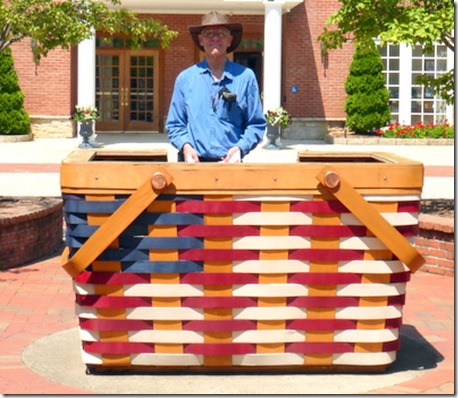 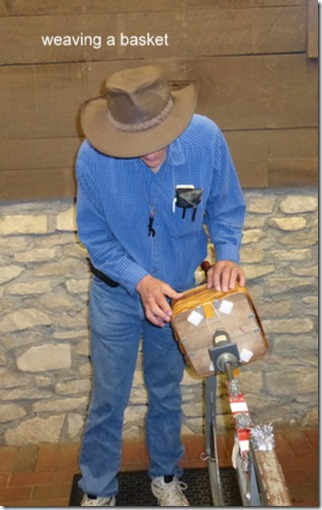 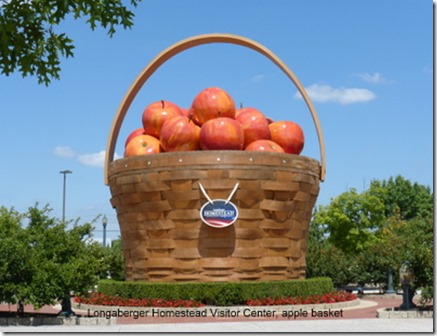 Largest apple basket.  This is a replica made from metal. 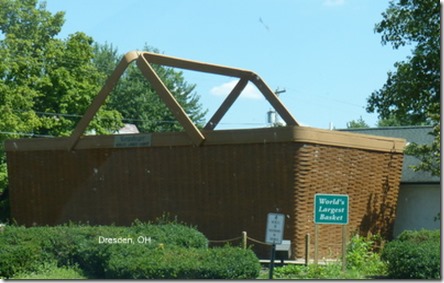 Today we headed north from Bardstown toward Ohio. We generally travel using maps and two(sometimes three) forms of electronic navigation.  My navigation program tends to plot the most direct route.  That means that if two large roads meet at an apex but there is a smaller road that avoids the two longer sides the program will route over the smaller road.  Usually not a problem but you have to be careful because the program does not know how small the road or what the road surface  is.  Just west of Lexington we had just such a situation.  There was a small road that avoided going into Lexington.  The road looked fine so we took it.  Small country road similar to many we have been on.  Freshly resurfaced and very smooth.  Within a hundred yards the road narrowed into a country lane with a lovely tree canopy.  Still very comfortable driving but at a reduced speed and had to be careful passing oncoming traffic.  The really neat thing was that the road passed through something we had been looking for our entire stay in Kentucky – miles and miles and miles of horse farms with manicured pastures, beautiful ponds and lakes,  and large and stately stables and homes.  Beautiful!  The only difference from the postcard pictures is that all the fences were brown, not white.  In fact we have seen very few white fences at all.  Probably one of the prettiest stretches of road we have seen this trip.  At one point we turned a small bend and crossed a VERY narrow bridge over a creek/small river.  Just upstream from the bridge was a dam creating a pond in the creek.  At the edge of the pond on one end of the dam was an old mill.  All of this in a little hollow with trees all around.  The whole road was filled with picture ops and Sue took lots of them.  Unfortunately we had a small setback.  Once in Ohio we stopped at a rest stop.  Several miles after leaving the rest stop Sue could not find her camera.  Returning to look for it would have been quite involved and quite problematic.  So – all we have of that lovely road are memories.  We called a semi-local Costco that was on our way for tomorrow and found that they had several of the exact camera in stock.  She will have little interruption in her picture taking and only the loss of one days pictures.

Up to Louisville.  We parked the carbus at a Walmart about ten miles from downtown and drove the Suzuki downtown.  Our goal – Louisville Slugger museum and factory where over 80% of bats used in major league baseball are made.

Great museum with static and interactive displays covering many baseball greats and immortals. 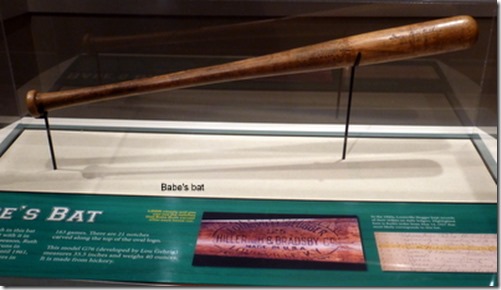 Tour takes you onto the floor to watch all steps of bat making in progress.  Tour starts with demo of how bats used to be made by turning by hand on a lathe.  Expert woodworker takes about 20 minutes to turn a bat.  Automatic lathes used now take less than 15 seconds to turn a bat.  Main production bats are cut using one of several templates to guide lathe.  MLB bats are cut using computer guided lathes.  Personal specs for every major league player are in data base.  Two or three keystrokes and lathes can crank out as many bats as needed tuned to a particular players wants.

Recent addition to museum is a room of things baseball done in Legos. 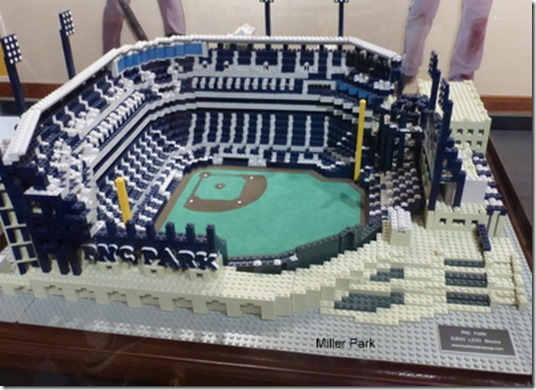 This next picture is a clever idea.  The picture shows a baseball action scene all done in Legos.  Within the picture are all the words to “Take Me Out to the Ball Game”. The word Legos are raised slightly.  Looking straight on you don’t see them but from the side they pop out. 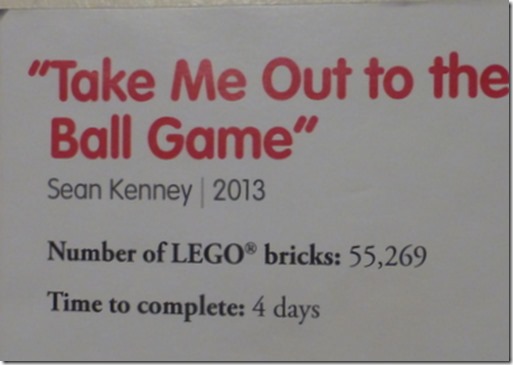 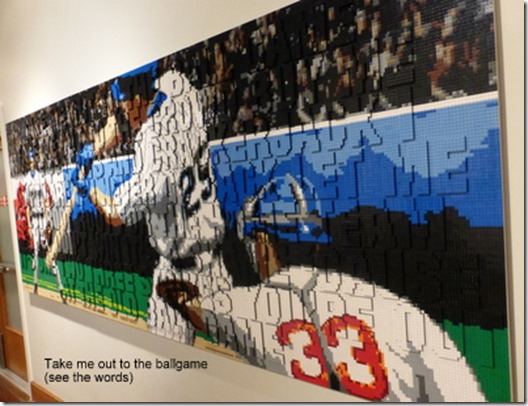 Back to get the carbus and then south to Bardstown.  In Bardstown is a state park (nice campground) which encompasses the house and grounds of the home that was the inspiration for Stephen Foster’s song ‘My Old Kentucky Home’. Also on the park grounds, not far from the home, is an outdoor amphitheater.  This is the summer home of a production now in its’ 55th year. The Stephen Foster Story.  Two and a half hours of Stephen Fosters’ music tied together by a romantic story line and performed VERY well by a cast of about twenty.  Some cast members have been part of the show for 20-30 years.  We thoroughly enjoyed the whole production. 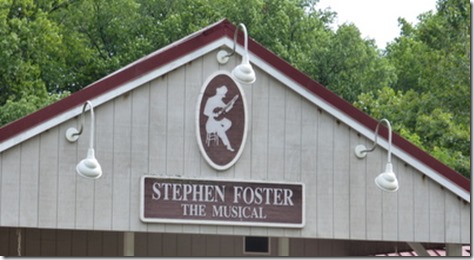