Spent the last two days driving south out of Montana and then south and east across northeastern Wyoming to Gillette.

Wednesday we again stopped at Little Bighorn Battlefield National Historic Monument.(Custers Last Stand).  This time we unhooked the Suzuki and drove the length of the five mile road that goes to Reno's battle area and then points out the sequence of events leading to the end of Custer and his men. 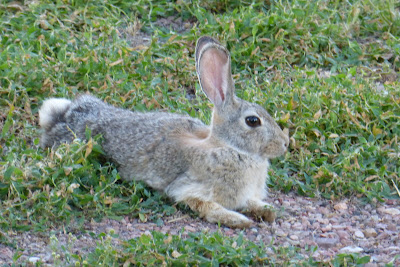 We arrived in Gillette about noon Thursday. First stop was a quick lube place that has a coffee and baked goods shop attached. Have a bearclaw and do some wifi while you wait for your cars oil change. We wern't into goodies but the oil and lube was quick. Drove right in and drove out 15 minutes later. Didn't even have to unhook the car. Just drove everything right over the pit. Carbus is now good for another 3000 miles. Next stop Flying J to top off propane and fill both vehicles with gas. Then a first for us - we parked in the far reaches of a Walmart parking lot to spend the night. Did some minor shopping there and walked several blocks exploring stores in the area. We did not want to run the generator to cook dinner so we we had our first dinner out of the trip. Mexican of course. Tiny little place that served very tasty food in HUGE proportions. Prices were lower than we have seen in quite a while and the service was speedy. A bit removed from main part of town but the locals know about it. Placd was packed with people waiting. We lucked out and walked in to the last open table for the duration of our meal.

This morning we did early check-in for the Escapde. Set up camp, had lunch, and then went on a tour of an open pit coal mine. Free bus tour provided by the mine. Our driver happened to work at the mine a couple years earlier and gave a very good description of the process and was able to find areas where we could see most of the pit coal mining operations real time. Pretty cool. 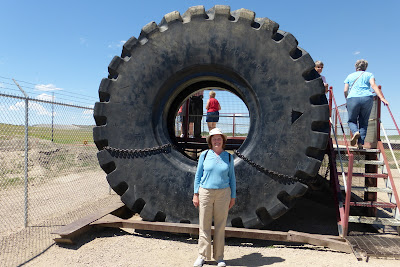 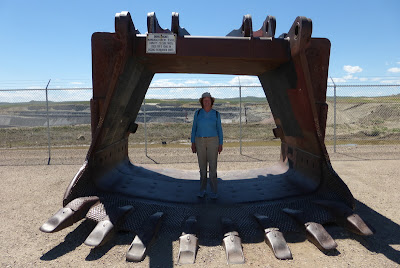 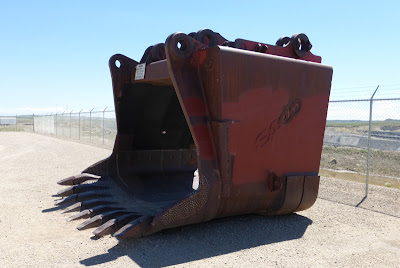 Not unusual to find petrified wood associated with coal deposits. 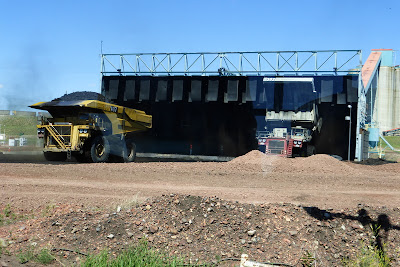 Truck on right dumping coal.  Truck on left backing in to dump. 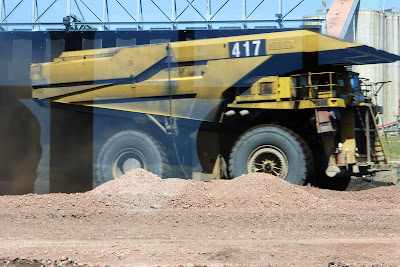 Remember picture above where Sue didn't even reach center of tire.  Some perspective as to how big these trucks are. 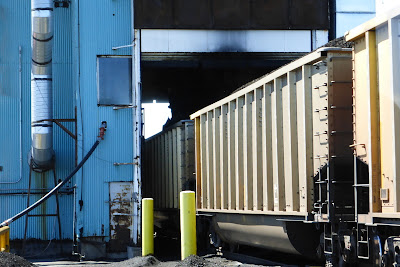 Coal being loaded into coal cars.  Coal comes out of a chute just behind dust area on silver bar above car.  Trains are 120 cars long +/-.  Train never stops.  Rolls through fill tower @ .6 mph with chute closing between cars.  Takes 45 sec. to fill a car. 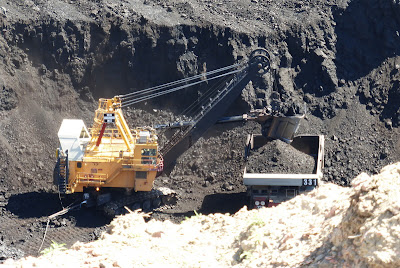 These machines are huge. 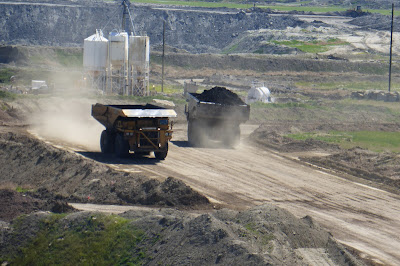 Literally an endless process.  Mine operates 24/7,  365 1/4 days a year.
Work shifts are 12 hours long.  Scheduling is such that everyone works days and nights and works about 14 days a month.

We left Missouri Headwaters at mid morning as we had a short drive planned.


East through Bozeman again and then more east. About 20 miles east of Bozeman the road starts to descend and the country starts to level out. Mountains give way to wide green valleys which give way to the vast flatness that is the eastern half of Montana. About 12:30 we pulled into a nice city park in Columbus, MT. Large park right on the banks of the Yellowstone River. We were not the only ones to find this spot. Just about every spot was taken. Some spots had several Rvs in them as there was a RV club apparently from Texas camped there. Looked like half of Texas was staying in that park. We did find a site and then took a walk to visit the river. Lazy afternoon. 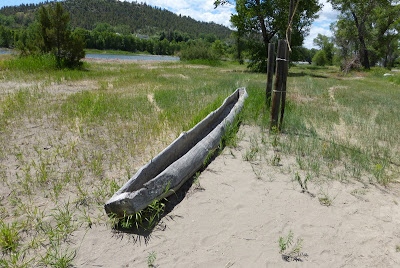 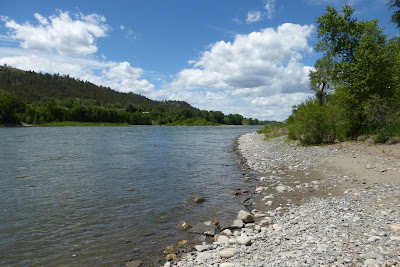 Saturday we drove east to Idaho Falls to do some shopping.  Sams Club for gas and Hancock Fabrics for cord to restring a blind.  Leaving the high plateau of southern Idaho we headed north up the eastern side of the state.  Gaining elevation potato fields and ranches gave way to evergreens and hills.  We took a scenic side loop that climbed to the top of a ridge paralleling a river that has two large waterfalls.  Lower and Upper Mesa Falls.  Upper Mesa Falls is the highest in the state. 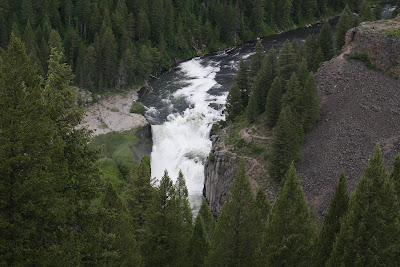 North some more to a fishing/hunting/back country 4 wheeling resort.  RV campground was quite nice and pretty full with back country type campers.

Sunday we went a few miles north to Montana and then north through some "Big Sky" mountain bordred valleys to the town of Three Forks and Missouri Headwaters State Park.  At this point three rivers come together to form the Missouri River.  Lewis and Clark named the rivers (Jefferson, Madison, and Gallantin) when they reached this point on their journey to find the headwaters and then on to the Pacific.  From here they went up the Jefferson and then by foot over the Divide and down to the valley of the Salmon.  Very nice park.  Quiet, secluded sites several miles from the freeway.  No facilities but the carbus is self contained if needed. 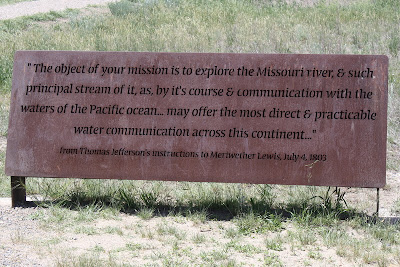 Charge given Lewis and Clark by President Jefferson 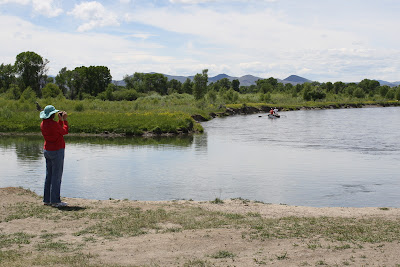 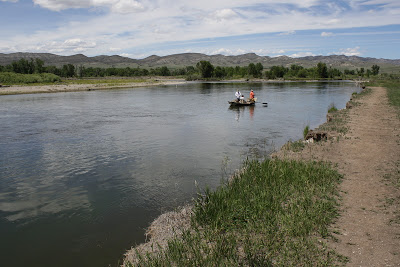 A friend whom we went to college with purchased a second home with her husband east of Bozeman.  We were parked about 20 miles west of Bozeman.  On a whim Sue tried calling her.  They were in Montana (home base - Merced, CA) and invited us to dinner.  We did some sight seeing in the state park and headed east.  Stopped in Bozeman to buy some wine at Costco and then kept east following her directions.  Fifteen more miles we left the freeway and headed up a graded gravel mountain road.  Up and up and up and..... never going down for four or five miles.  Their house is not on the top of the ridge/mountain but is not far below.  Fantastic view.  Twentyfive acre lots with lots of trees so each house is alone.  I had not seen her for 50 years and had not met her husband.  Sue had seen them 20 years ago on a trip south to Ventura.  It was like there had never been any time lapse.  We had a great evening with them and some friends of theirs (the wife grew up with Vanda in Merced).

Monday (today) was a layover day.  We went to Wheat, MT which is basically just the location of a large bakery.  They have a store and deli associated with the bakery.  The store sells a large variety of breads and yummy baked goods. There is seating to enjoy your pastry and beverage. Also sells large sacks of many types of flour.  The bakery is just off the interstate and is so popular that in addition to parking for cars (lot 3/4 full) there is parking for RVs and big rigs. 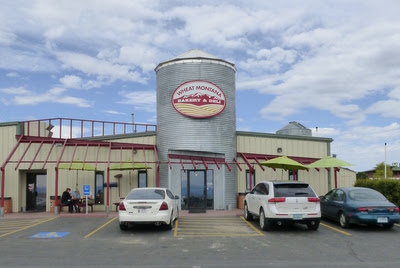 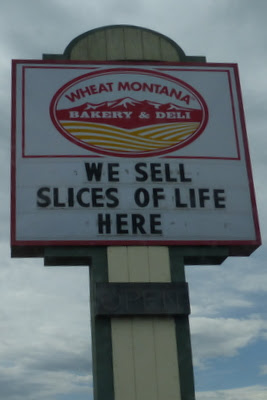 From the bakery we went south to Lewis and Clark Caverns. The cave is located in a bluff overlooking the Jefferson River up which the party traveled after leaving the headwaters. They did not find the caverns but they were named for them. 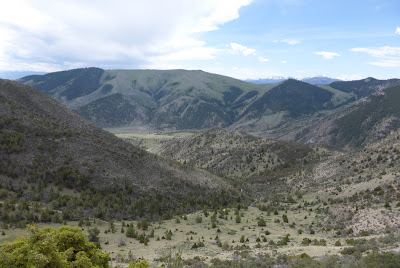 
The tour starts with a 3/4 mile hike along the side of the bluff up to the entrance of the cave. After entering the cave the whole tour is down. More than 600 steps down during the tour. Then out through a tunnel and a half mile walk back to the parking lot. 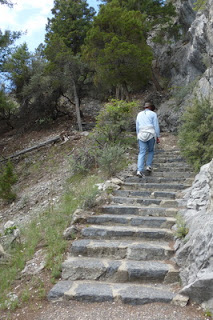 Portion of trail to cave entrance 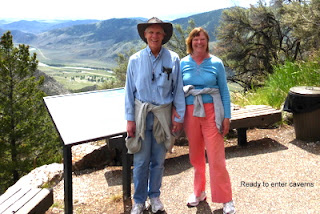 At entrance to cave 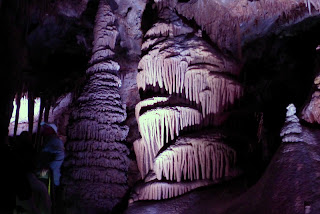 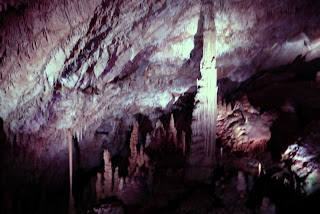 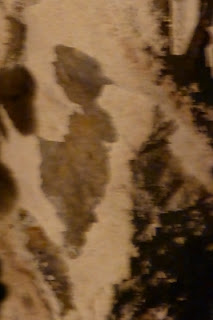 Amanda, this one's for you.  They call it 'Mary Poppins'. 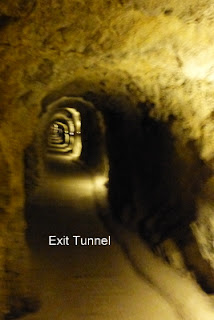 Exit tunnel has heavy doors at each end to control air flow in/out of cave at unnatural opening.