Virginia is full of Civil War battlefields.  The area around Fredericksburg and Spotsylvania has a string of them.  Today we visited several of them. Here, as with all the battlefield sites we have visited around the country, the NPS staff (rangers, interns, and volunteers) do an excellent job of presenting the participants and progression of the actions that took place in each area.  They can talk nonstop for 30-60 minutes giving a chronological description of names, numbers, locations, actions, and outcomes.  It really enhances ones understanding and appreciation of what you are seeing and how it applies to other events of the time and even today.  If you visit a NPS site always watch the movies if offered and take in as many Ranger talks as you can. 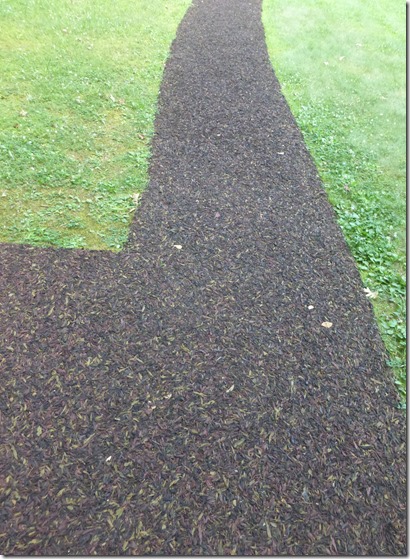 Example of the pathways around the Chancellorsville visitor center.  Cool stuff.  Looks like shredded bark that is used in landscaping but it is treated with something.  It is springy.  Like walking on a cushion but with support and bounce back.  Very comfortable. 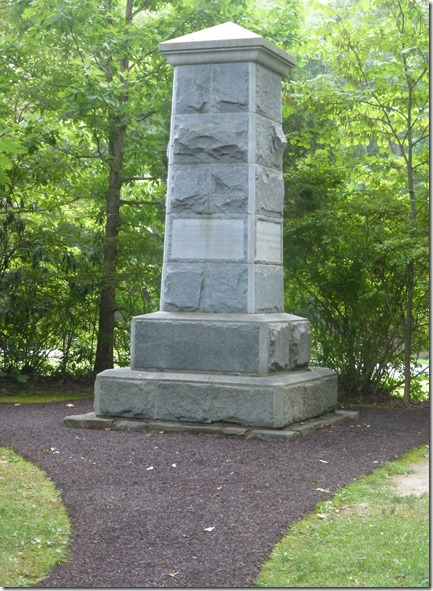 Chancellorsville battle is where ‘Stonewall’ Jackson was mortally wounded – by his own men.  Monument marks approximate area where he was shot. 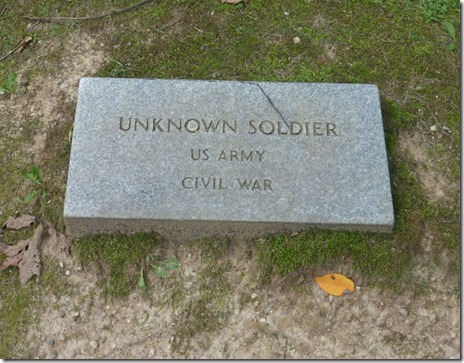 Grave of unknown Union soldier found during placement of monument above.  Marker placed as tribute to all who died here.  There were a LOT. 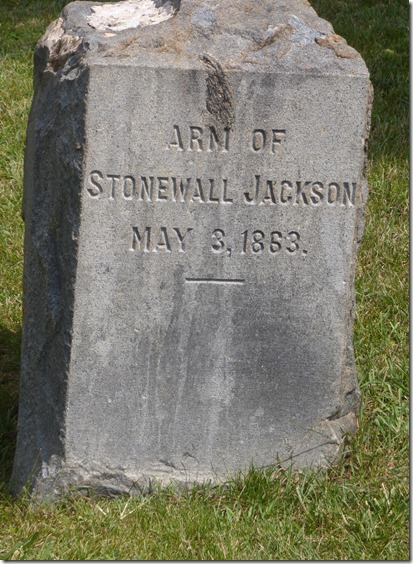 Parked in a campground about 2 miles from Appomattox Court House.  Note the spelling.  A courthouse is a building in which judicial matters are handled.  A Court House is a area of population (usually a town or village) that is a county seat. 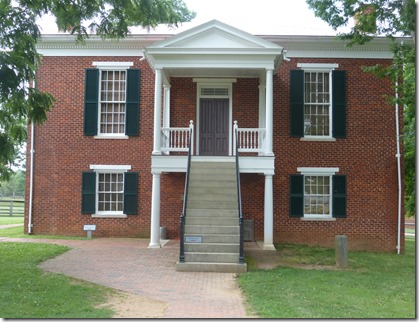 This is the Appomattox Courthouse in the village of Appomattox Court House.  This is NOT where Lee surrendered the Army of Northern Virginia to Grant.  That happened in the parlor of a home about 150 yards west. 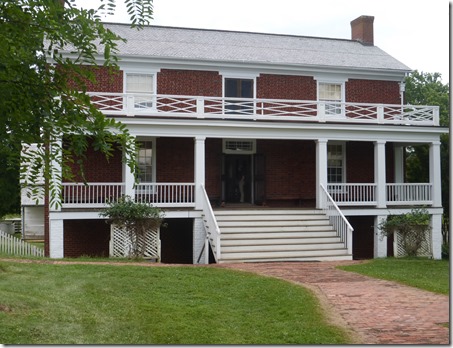 This is the McLean House.  Location of surrender. 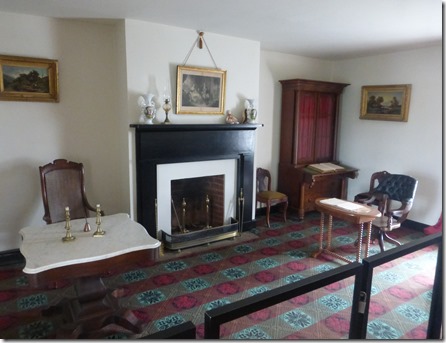 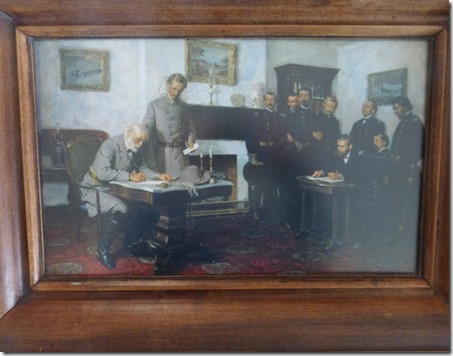 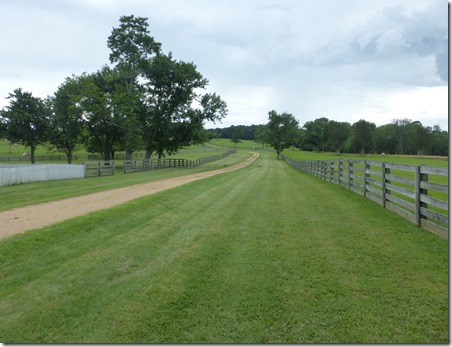 Richmond – Lynchburg Stage Road.  Goes through Appomattox Court House.  This road was key in the events that led to Lee’s surrender.

First (overlooked this on first post)  Happy Anniversary Ken and Julie! A big one.

This morning we went to Mount Airy and visited numerous Mayberry sites.  When we finished Sue wanted to take a drive on the Blue Ridge Parkway.  We have crossed it a number of times but have not yet driven it specifically.  We left Mount Airy and headed north up the freeway to catch a spot where we could get on the parkway.  Just after we started north it started to rain. Did I say RAIN.  We figured driving the parkway would not be any fun at all if we could not see anything so we returned to the campground.

About an hour later the rain let up. Typical of summer storms.  An hour after that sunny with partial clouds.  I suggested we might try again.  OK.

Up the freeway about 20 miles to Fancy Gap and then south on the parkway. The Blue Ridge Parkway stretches 469 miles along the crests of the southern Appalachians and links Shenandoah and Great Smoky Mountains National Parks. It is a typical parkway.  Limited access, no commercial development, good road, and beautiful scenery. Along the way are many points of historical interest, view spots and many picnic, hiking, and camping opportunities. There are several visitor centers along the length and a couple of museums.  About half way down the parkway is a center with a special emphasis. Fifteen miles into our drive we saw a sign for upcoming Blue Ridge Music Center.  We had started our drive without benefit of a map. The visitor center gave the opportunity to get one.  We found that this center is devoted to the unique folk music of the Blue Ridge Mountains and adjacent areas. Much of what we know as folk music had its origins in the Blue Ridge Mountains.  The small museum is very good.  Displays on history of the banjo and its use in music around the world.  Also Blue Ridge life from a music standpoint.  Many visual and audio samples of Blue Ridge style music. Displays tracing the progression of folk music in the area and in America.  The center has a summer program that includes live performances every afternoon by local folk music artists. We got there in time to enjoy the last half hour of the days performance.  Nostalgic sound and they even sang a couple of songs we know.

Amazing what doing things on a whim can turn up.

The campground we are in was part of the property owned by Eng and Chang Bunker. The Siamese Twins.  Campground is owned by a descendent of theirs.  Will not relate it here but encourage you to Google them and read a thorough history of their lives.  They were pretty amazing in all that they did. 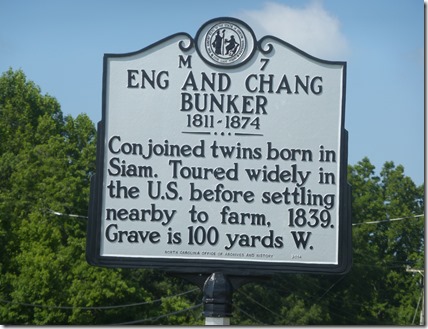 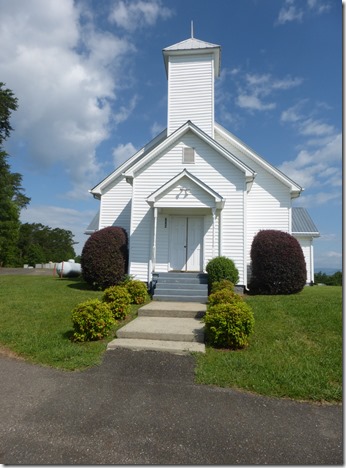 Cemetery is behind this historic church. 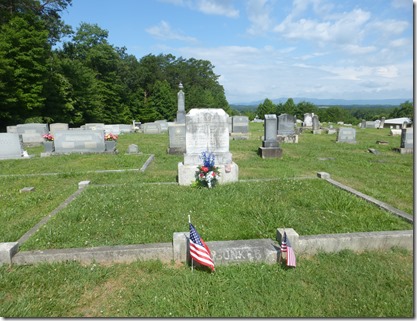 Grave of Eng and Chang and their wives. 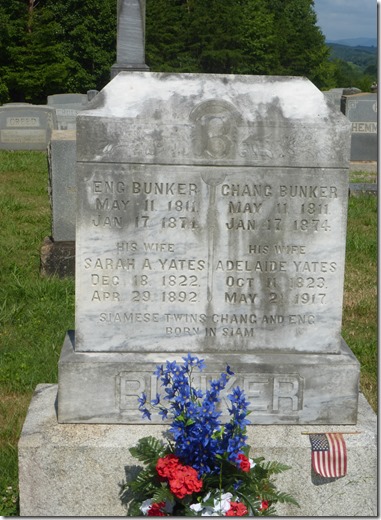 The town of Mount Airy, NC is a few miles north of the campground.  Andy Griffith grew up here and the fictional town of Mayberry RFD is based on many spots in Mount Airy. 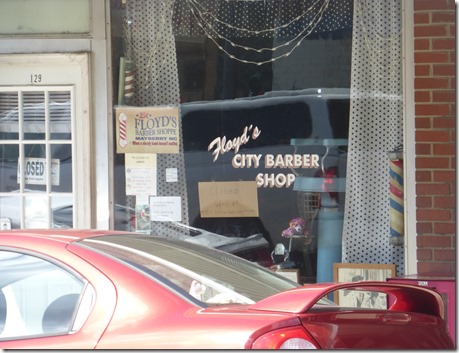 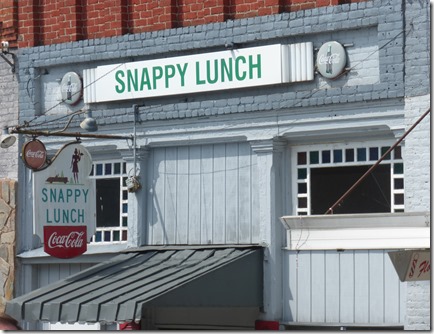 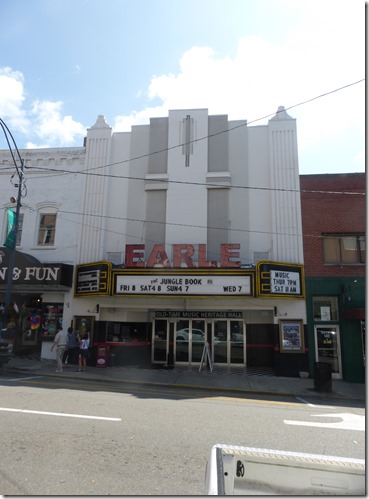 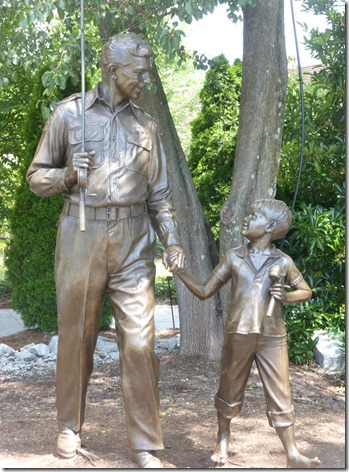 A boy and his dad. 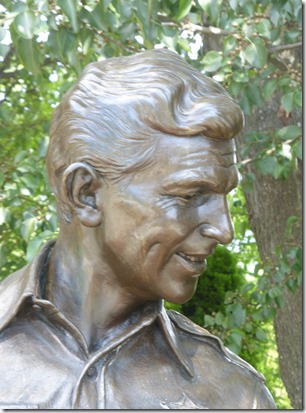 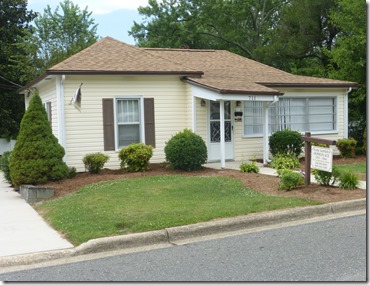 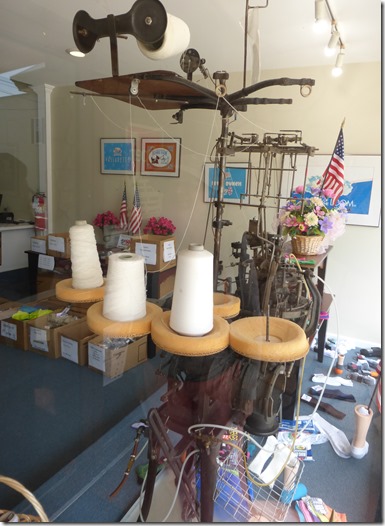 Saw this in a sock outlet (never seen that before – nothing but socks) Any guesses as to what it is? Email or text your answer.