Not too much to report.  This rally is much like others we have been to.  Seminars, most of which we aren’t interested in because we have been before at other rallies.  Vendors, probably the smallest collection we have seen in over ten rallies we have been to.  Hugs, smiles, friendly faces and conversation – things Escapees are known for and it is all here.  Entertainment – something that Escapades do well.  Other rallies have entertainment and even more of it in the run but the Escapade organizers get great acts.

The second night we saw the Brett Family.  Fun, amazing talent, and inspirational.  I cannot adequately describe their show.  They have a web site that can maybe give some insight as to what we saw.

One big comment on Escapade entertainment.  Evening entertainment usually is scheduled for an hour.  At rallies done by other sponsors that is how long shows last, sometimes earlier.  Often the audience is glad to see the show end.  The shows we saw here were also scheduled for an hour.  Both lasted nearly two hours with no breaks and no one in the hall noticed.  Both could have gone longer as far as we were concerned.

The possible thunderstorms did not happen.  Rain did.  Two and a half days off and on.  Sometimes more on than off.  One day two inches of rain was predicted.  Most of it came in about two hours starting at 10pm.  I enjoy rain and it was fun to sit outside and watch and hear it.  Yes, outside.  Temperature is in 70’s even in the rain.  Between showers it still feels like rain.  Humidity is quite high.  A towel we used three days ago is still damp.

Last Friday when the RVs started arriving and parking it was sunny, clear, warm, and dry.  Every RV here is parked on grass.  It really is a nice comfortable parking surface most of the time.  Until it gets very wet.  RVs are very heavy, have road tread tires, and not 4WD.  Even a light SUV leaves deep muddy ruts now when the grass is driven on.  I saw a medium weight 4WD truck sunk in the mud to the axles on all four wheels.    Great big trucks with duel tire rear axles that pull big 5th wheels with ease are getting stuck for lack of traction – without the trailers attached.  There are HEAVY duty tow trucks roaming the parking area.  Friday morning ALL the RVs here are supposed to leave.  Should be interesting.  Still having occasional showers.

Friday Preview?  Hard to see here but RV in right center is surrounded by deep muddy ruts.  Had to be winched probably 75 yards to solid ground. 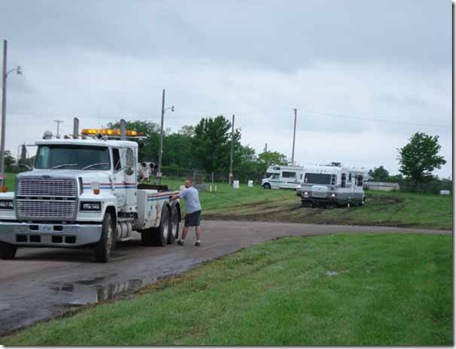