First – yesterday was Ken’s birthday.  We wished him a happy one in other ways but did not blog it.  So -

No blog for a few days.  Not very good internet for uploading and weather has not been very conducive to sitting and composing.  This area is approaching 30 straight days of highs above 95 degrees.  Last week has been 98-99 every day.  Add in humidity and heat index has been above 110 degrees every day.  Interesting side effect of 80 degree dew point – go outside at 7:30 in the morning (temp already 79-80) and car is covered in heavy condensation.  Not light moisture.  The whole car is WET.

Stayed at a campground about ten miles from Hilton Head the last couple of nights.  Drove to Hilton Head to check out the hype and aura.  I was under impressed and frankly rather put off and uncomfortable.  There is a parkway that runs the length of the island. The parkway is lined with dense trees.  So dense you cannot see what might be 30 yards from the main road.  There are shopping areas, gas stations, restaurants, theaters, etc. Typical of what you might see in any town in the country.  Except – you cannot see any of it.  Not a clue even. If you did not know exactly where an objective location was and how to get to it you would never find it.  Not so typical of other towns is that pretty much every side road off the parkway is gated.  Seems like the whole island is exclusive gated communities or exclusive private golf courses – also gated.  The place reeks of affluence on top of affluence.  There are a couple of public beach access points but no parking anywhere near them if at all.  The access is a 2 1/2 foot path between walls of massive private ‘homes’.  Lots of bike paths filled with upscale families on expensive bikes.  Many young women riding bikes in bikinis – just the bikinis, no cover up clothing.  They did have hats and dark glasses though.  Felt good to go back across the bridge to the mainland.

Yesterday we drove to Savannah – only about 20 miles from camp site.  Very nice day.  We took a tour trolley that had many stops at which you could get off, explore, and catch another trolley.  Driver of each trolley conducts a running narration of what you are passing.  Historic Savannah is laid out with 24 ‘squares’ – city block parks, as well as every street being lined with trees. 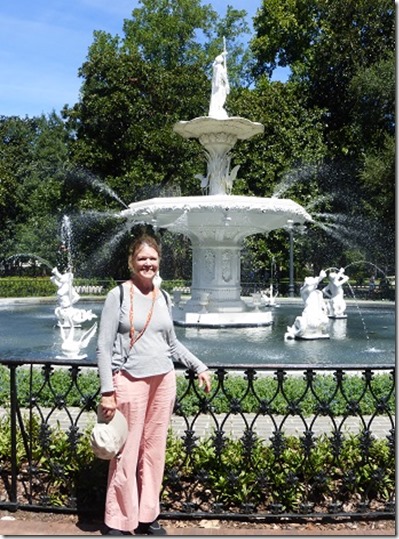 Many very old homes and buildings, most with history as to inhabitants, function, and/or architectural style.  Lots of history.  Many famous people, past and present. 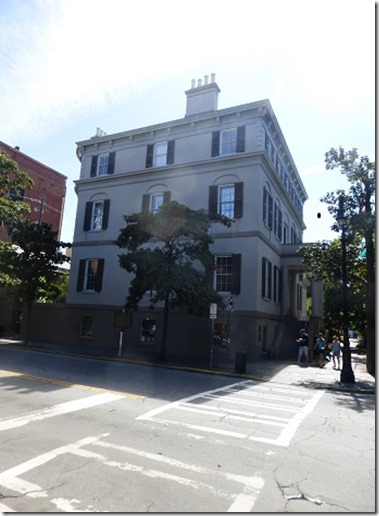 Birthplace of Julia Gordon Low.  A few blocks away is the house she lived in as an adult.  Behind that house is a carriage house which is where she started this: 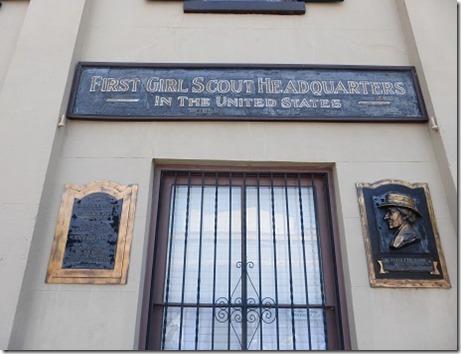 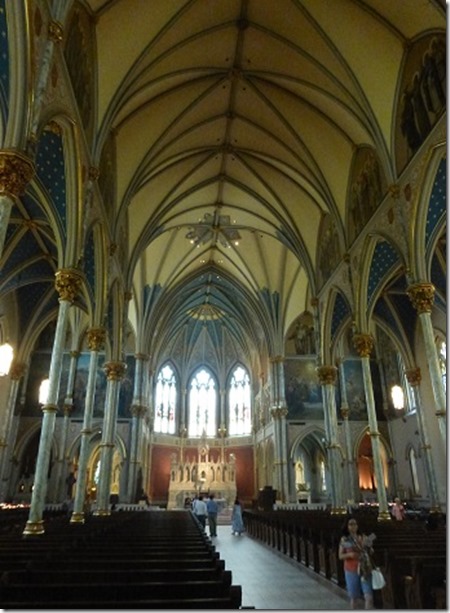 Interior of Cathedral of St. John The Baptist.

One could spend days just exploring  historic Savannah.  There are a couple of touristy spots but they are small and even then are filled with history.  For instance – in the waterfront area, the first floor walls of all the buildings, the sea walls and terracing walls between the river front street and the rest of the city, and the streets themselves (cobblestone) are all built with stones used as ballast by ships coming from Europe to pick up cargo (much of it cotton) to take back across the Atlantic.

Savannah is small enough to be comfortable but able to be contemporary if one wants.  There are miles of uncrowded beaches and open spaces less than a half hour away.  We spoke with several locals who were comfortable and proud of their city. Rightly so. 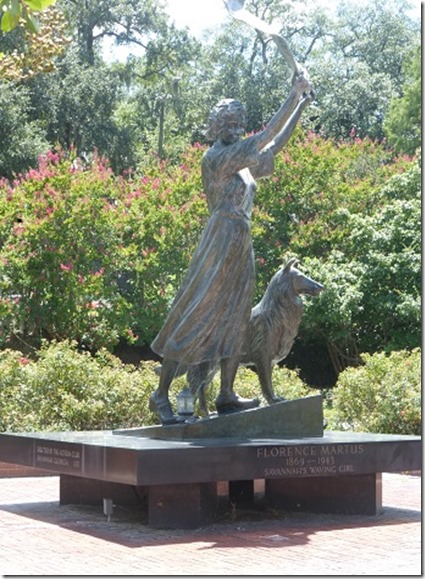 The Savannah Waving Girl.  Google it.

We are now a few miles north of Augusta in a COE campground on the shore of Lake Thurmond (or Thurmond Lake) which is behind Thurmond Dam across the Savannah River.  COE campgrounds are great.  Generally on a COE body of water.  Away from cities and traffic.  Big, level sites, often with water and electric. And, with NPS senior pass, half price. 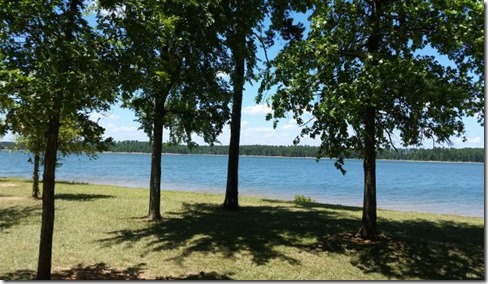 No posting for a while.  Hasn’t been much really noteworthy.

Sweet grass basket making is a craft/skill/art form that came from Africa with the slaves and has been handed down for generations.  It seems to be pretty specific to this area.  Have not seen it anywhere else. Some pretty amazing basketry.

Charles Pinckney was a contributor to the drafting of the US Constitution and signed the final document.  His family had seven plantations in the area.  The NHS is on one of them.  House contains displays on Pinckney, some insights on drafting of Constitution, plantation life, and archeology.

Today we visited Fort Sumter.  Half hour boat ride from visitor center to island.  Time filled by very good narrative by ranger on history of fort before, during, and after the Civil War.  Approaching the fort is a bit underwhelming.  Nothing at all like pictures one sees of event that led to start of the Civil War.  Fort originally was a very imposing structure with 50’ walls bristling with canon ports.  War and time were not kind to the fort.  Walls are now one story high and even then one wall is replaced with wood.  The layout of the fort is intact and there are many descriptive and interpretive signs as well as a museum. 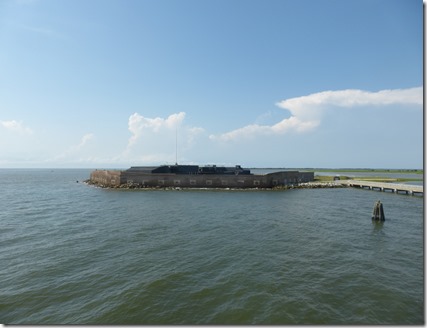 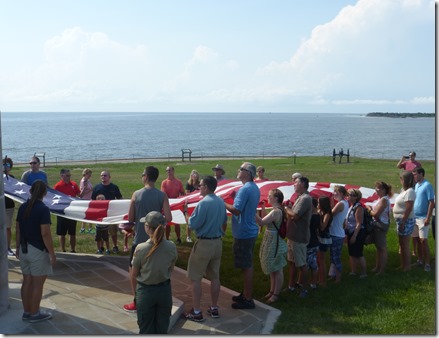 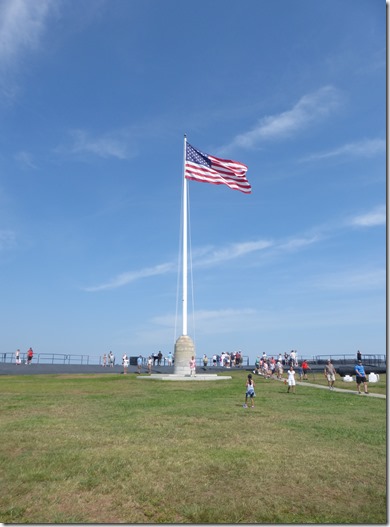 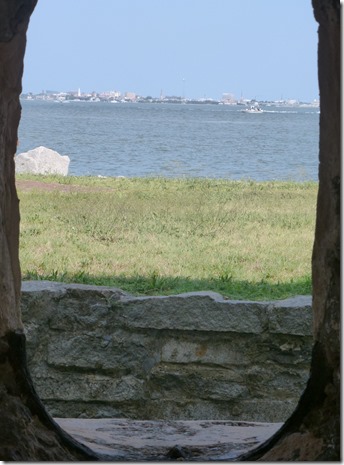 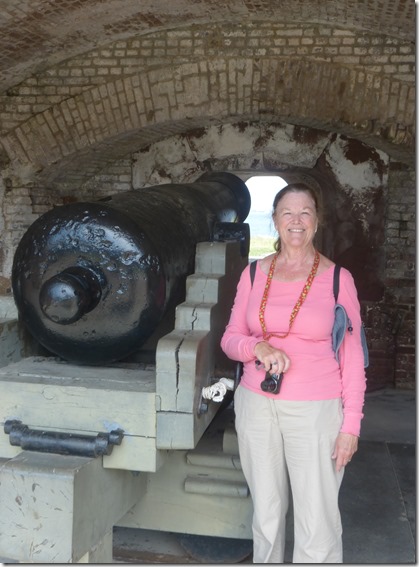 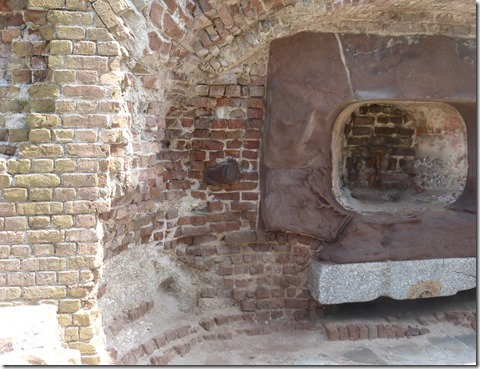 Center of picture is shell casing imbedded in inside of outer wall.  Shell cleared wall on other side and stuck inside far wall. 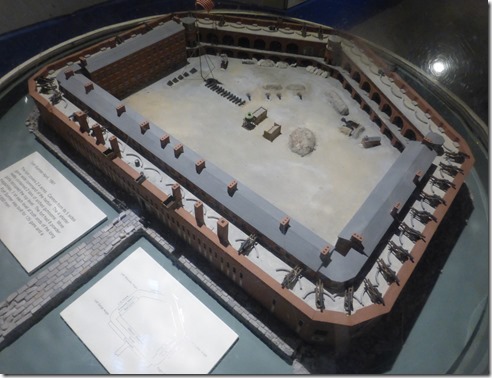 Fort Sumter as it looked prior to Civil War. 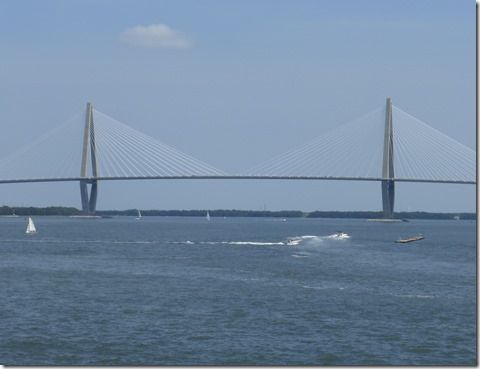 Longest cable supported bridge in country.  Cool to drive over. 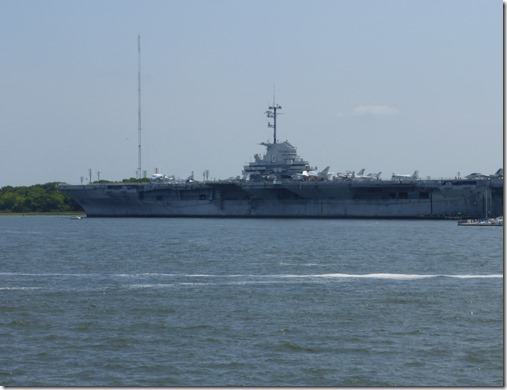 We toured historic Charleston on foot and by car.  Wandered the Historic Market, walked the cobblestone streets of the French Quarter, saw many old churches and interesting old cemeteries, old buildings, and several quirky points of interest. 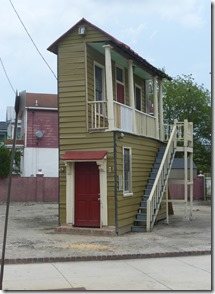 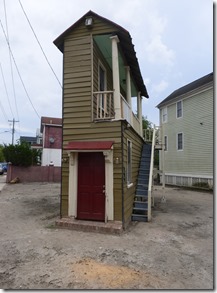 On the way back to carbus we detoured to see Angel Oak.  Wow! 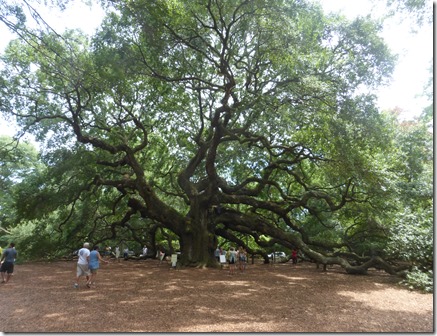 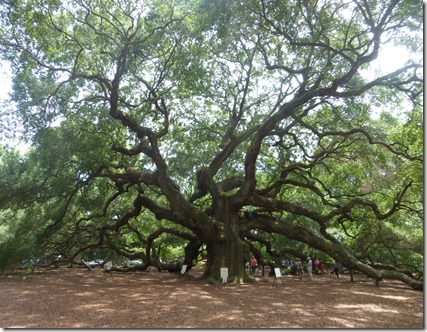 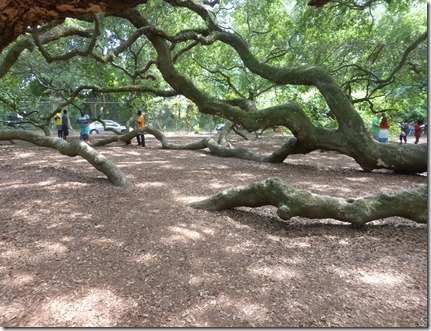 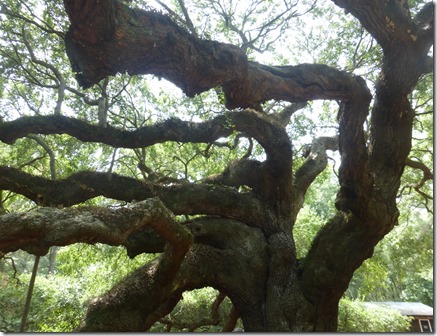 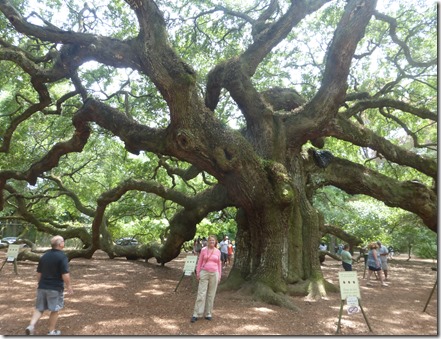