Escapade finished last night.  Five days of seminars, socializing, and shopping.  Did some of each.

Sue spent two days in the craft room.  First day she completed a quilt that had been pieced by someone else.  Now it can be donated somewhere.  The second day she helped people learn various crafts.  She also attended several seminars over the five days.  I went to a few seminars, met with a man who replaced some parts in our TV antenna (free), drove a golf cart for an afternoon hauling people between the meeting area and the RV parking area (over a half mile away), and shopping.  Me going to seminars can be expensive.  One seminar led to purchasing a new shower head (low flow but high velocity so you feel like a ‘real’ shower) and some neat zip lock things for closing bags of food, etc.  Also some LED lights to replace some interior bulbs.  Another seminar was a little more pricy.  We now have a Jetpack  MIFI modem/router  and we both have Smart phones.  Not too good planning at least on my part.  I have a whole family of instructor/coaches but I will not see them for four months.  I do know what the weather is @ my location though thanks to the phone.  Of course I could look out the window and get much the same information. 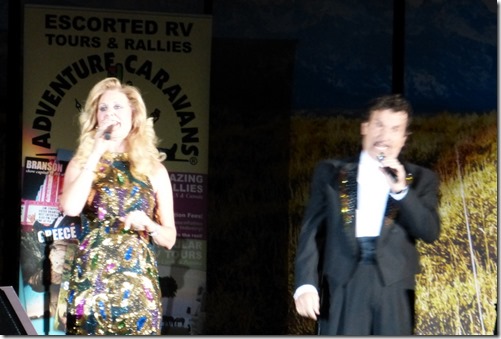 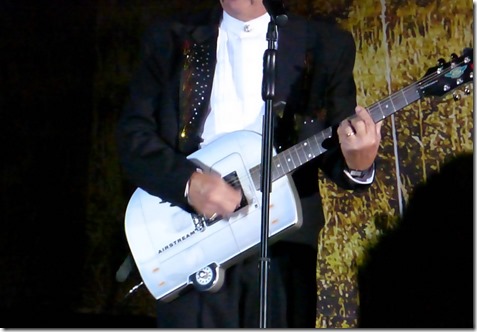 Check out his guitar.  Pretty cool.

Last night was the last night celebration.  Also the celebration of Escapees 35 birthday.  Catered dinner with lots of food.  Whole thing sponsored by RV dealer who had RVs on display and for sale during Escapade.

Final day of Escapade coincided with Fourth of July.  That means fireworks.

When we entered the hall at 5:30 pm for closing ceremony and dinner the sky was partly cloudy. When we left at 8:15 the sky to the west was very dark.  Shortly thereafter lightning started to the west – both forked and sheet scanning about 160 degrees of view in the west. 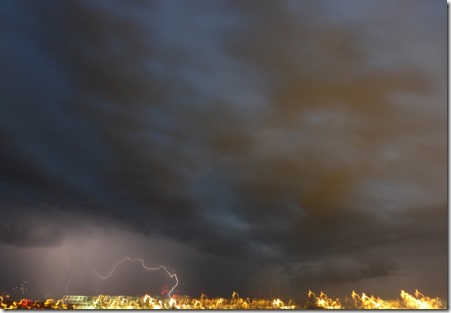 A while later there was thunder associated with the lightning.  We sat outside and watched natures display intensify and move toward us for over an hour.

The RV camping area we were in is adjacent to the fairgrounds track infield where the city of Gillette launched their fireworks.  We had front row seating right at our door.  Last year fireworks were canceled because of extreme dryness. This year no problem.  It rained much of the week before we arrived.  Story was that all the unused fireworks from last year were available plus they purchase another displays worth for this year.

Natures fireworks kept approaching and just before start time for Gillette fireworks the storm was almost over us.  Sheet lightning lighting the whole sky over us, loud thunder, and just starting to wind and rain.  Just as the fireworks started so did the wind and rain and more lightning and thunder.  It was like watching dueling fireworks displays.  I think God won but Gillette put up a good competition. Over 30 minutes of nonstop fireworks.  Not one followed by another but pretty much nonstop multiple launches.  Or whole rows of launchers set off in chains with less than a second between launches.  The sky was never dark.  And if it was, God filled in the blanks.  We stood in the lee of a large motor home to avoid the wind and rain and had a great view of it all.  Either event (nature or Gillette) would have been memorable.  Together, something else.  Great ending to Escapade.

This morning we drove north to Medora and Theodore Roosevelt National Park.  We have been here before and enjoyed our stay.  If you get a chance to visit the park and stay in the campground – do it.  Nice quiet spot, five miles from freeway, in same (large) enclosure as park wildlife. (Campground is not fenced off).  That can be interesting.  Last time as we were leaving we saw a  group of bison grazing at the front of a small camp tent.

The small town of Medora is a typical tourist spot with some places of historic interest, gift stores, restaurants, small park, golf course, etc., and one other thing _ The Medora Musical.  Every evening during the summer a musical review is staged in an outdoor amphitheater built into the side of a hilltop with a stunning view across the valley as a backdrop to the stage.  The place is huge.  Holds several thousand people.  Two and a half hours of nonstop entertainment often with 12-15 people on stage at the same time singing and dancing.  Each with his/her own microphone and each instrument in the band with microphone  as well.  We enjoyed the show but thought the show we saw before was better.  Still worth the trip. 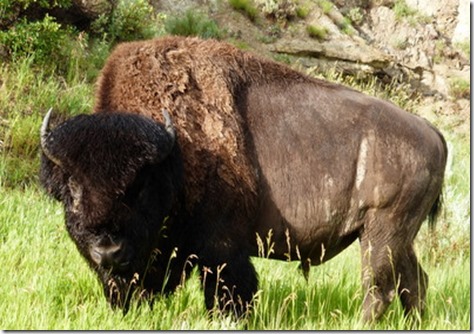 .This guy was hanging by the road as we drove from the campground to the musical. 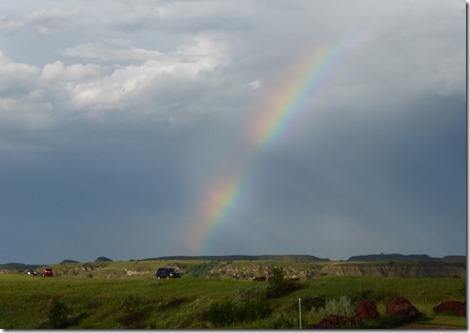 View from parking area for musical 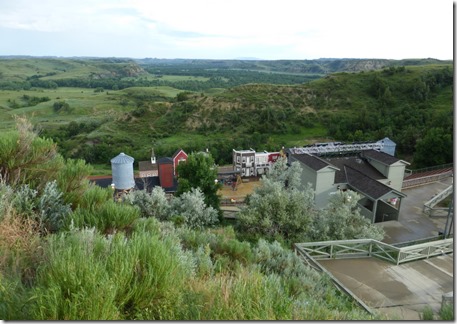 Amphitheater from above and behind.  Note view. 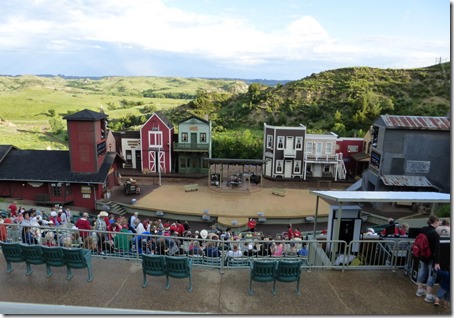 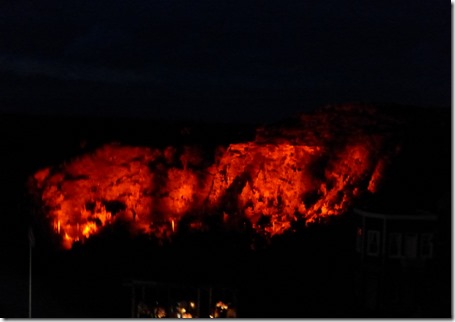 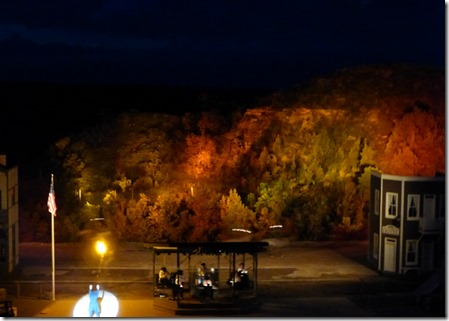 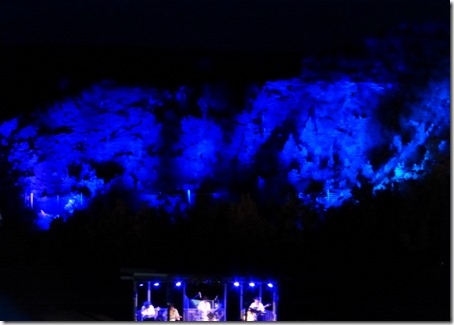 Not much to report on lately.  Escapade classes start today.  Last night was opening and entertainment.  I will do some classes today and Sue will do some quilting and volunteer in craft area.