Marking Time on the West Coast

The last few days we have been slowly working up the west coast of Florida, marking time prior to heading inland.

Mostly just sight seeing.  Like the Atlantic side, the Gulf side of southern Florida is pretty well developed non-stop.  There is an ocean but seeing it is difficult.  Homes and hotels on just about all the beach front.  Where there is a narrow access path there is no parking for blocks, if at all.  We did find one very nice public beach with good parking on the southern tip of Anna Maria island.  Mid-week, off season so not crowded.

Went to DeSoto National Historic Site.  Interesting to learn about him and his quest. 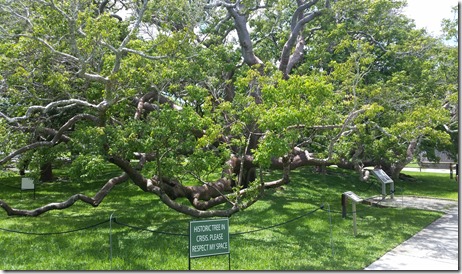 This tree is outside visitor center.  A Gum tree.  It is in crisis.  It has lived well beyond the normal time for that species.

Today we went to Weeki Wachee Springs State Park.  Long time tourist attraction now owned and run by the state of Florida.  Fun place.  Two sides to it. One side is a waterpark with slides, pools, playgrounds, volleyball courts, lots of lawn space.  Very well attended by families with kids of all ages.  The other side has three attractions/shows and space for functions.  One show is an animal (actually reptile) demonstration.  Brief, up close introduction to several different reptiles. Second attraction is a boat ride down the out flow river from the springs.  Short trip on the meandering, jungle like river to see some wild life and nature.  Third attraction is the Mermaid Show.  Under water theater where ‘real’ mermaids perform for about 45 minutes.  Fun show.  Well choreographed and performed. 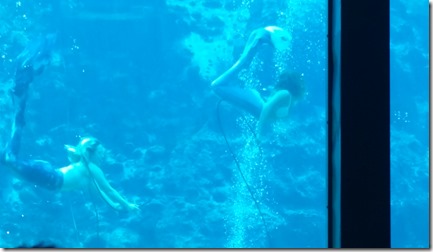 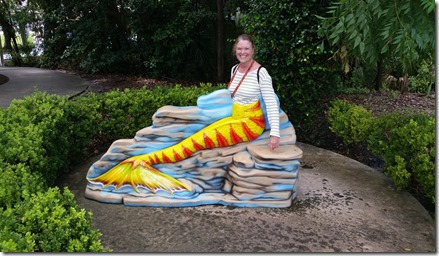 After dinner last night we took a stroll around the pond in front of our campsite.  Met this guy. 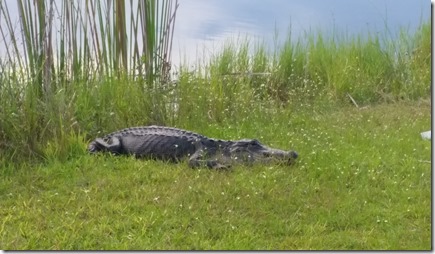 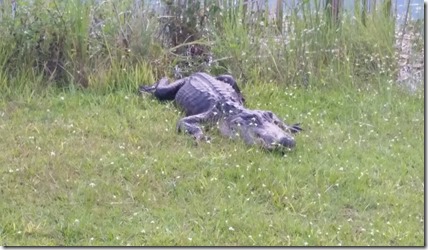 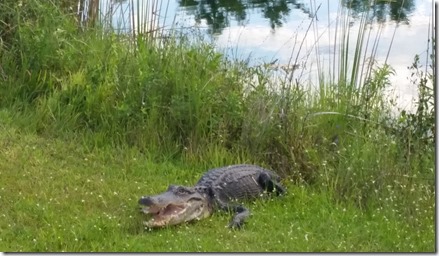 In the Everglades there is a plant called the Strangler Grape.   Seeds of the grape take root in the bark of trees deposited by birds or wind. 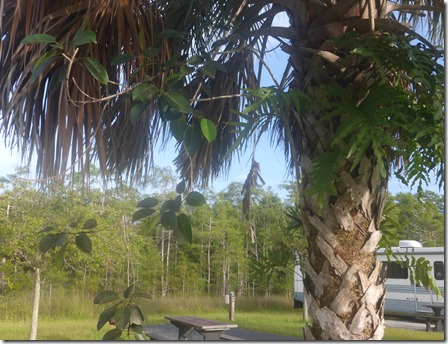 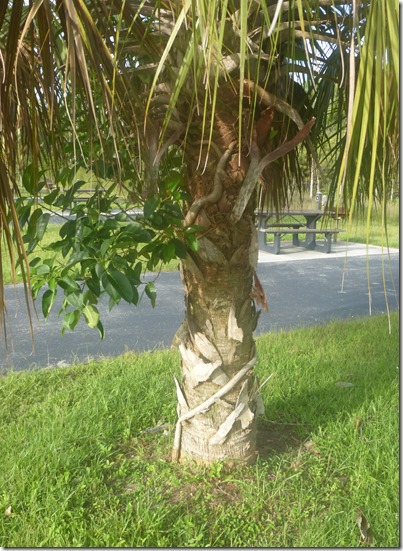 The grape sends roots down the host tree to the ground. 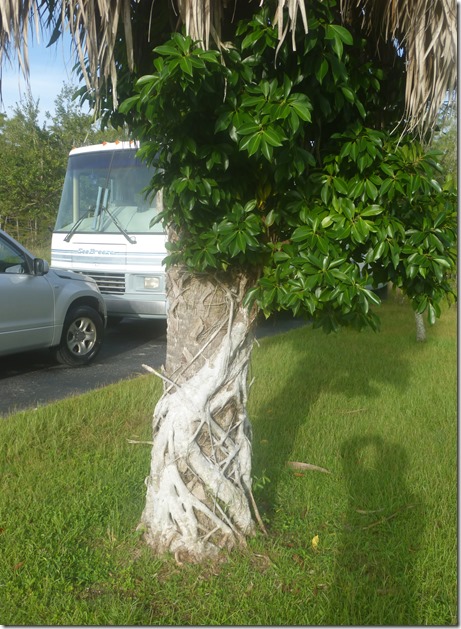 The roots of the grape spread and expand around the trunk of the host tree eventually surrounding the trunk.  We saw trees with trunks completely surrounded and covered by thick Strangler Grape roots. 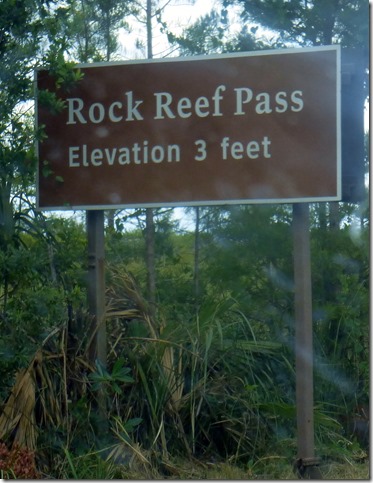 Only time the carbus has briefly dropped into low gear was over Monarch Pass at 11,312 feet.  Handled the one above with out any problem. 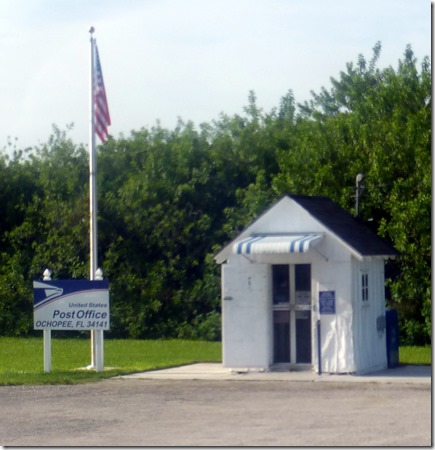 On to the west coast of Florida.

Last night we had a spectacular light show.  180 degree panorama of almost non-stop lightning – both sheet and forked.

Started the day with a drive along a dirt back road through Big Cypress.  Have to go slow at the right places and keep your eyes open.  Might be rewarded. 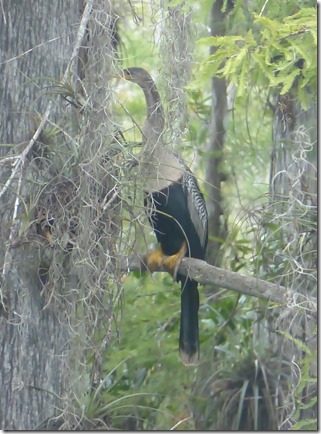 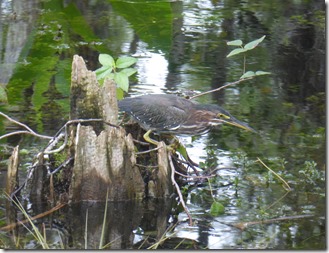 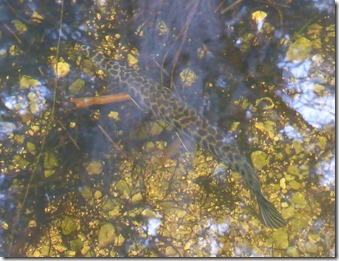 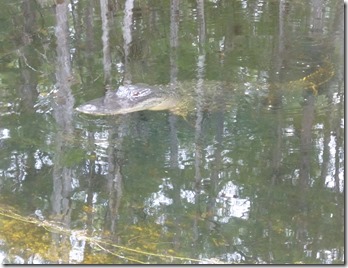 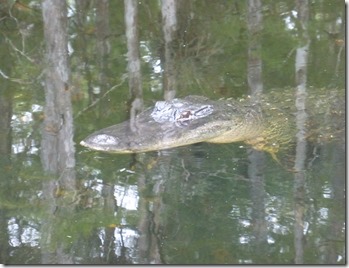 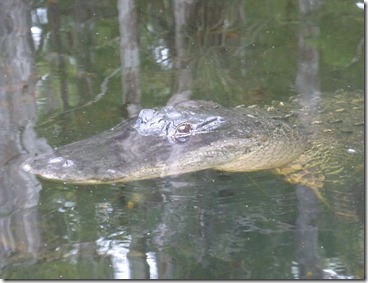 After the drive through Big Cypress on to Everglades again.  Took tram tour to overlook tower.  See any swamps? 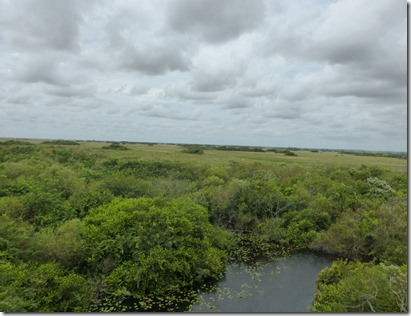 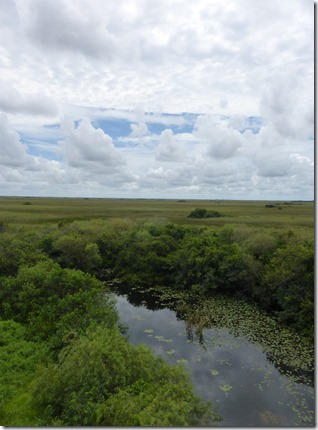 Yesterday we toured Everglades NP.  Drove the whole 38 mile length of the park road to the Flamingo visitor center on the shore of the gulf.  Took the concession boat tour at this point.  A bit disappointing.  The ‘Captain’ giving the tour and his one man ‘crew’ had no enthusiasm.  Both were rather robotic.  Information was presented but felt like it was totally scripted.  They put in their time and pointed out (not very distinctly) some sights but a movie might have been better.  Don’t think anyone left the boat feeling better for having taken it.  We (some of us) did see a baby crocodile.

Along our drive we stopped at several informative walks.  Interesting to see the different types of vegetation areas differing in elevation by just inches.  None of these areas is swamp as many believe the Everglades to be.  Grassy river and cypress hammocks prevail.

Today we drove to a campground in the heart of Big Cypress National Preserve.  From there to visitor center for some orientation and then to western edge of the preserve to Everglade City.  In Everglade city we took an airboat tour through the mangrove rivers.  Had not been on an airboat before.  Fun ride.  Felt much like our jet boat but more responsive at slower speeds.  Our ‘Captain’ was enthusiastic, talkative, and informative.  Looked very hard to find wildlife and at the same time give an enjoyable ride.  We saw (within feet) alligators, raccoons, and a mother and baby dolphin swimming through the harbor. 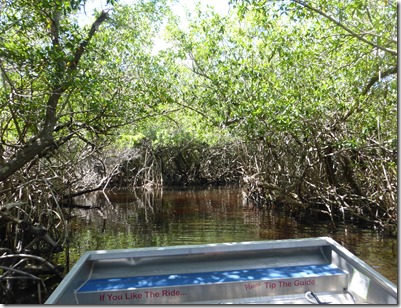 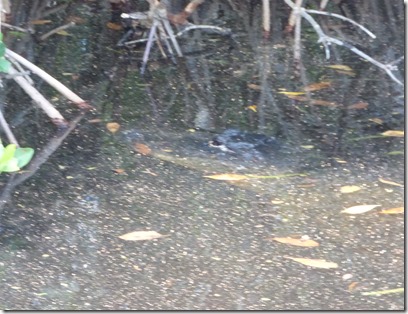 Hard to see but he sees you. 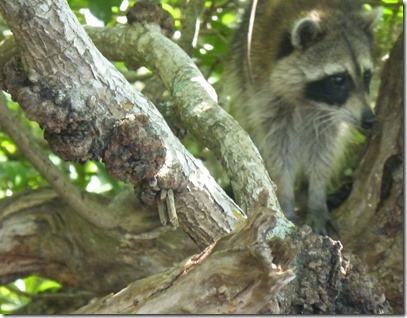 Hanging out in tree next to river. 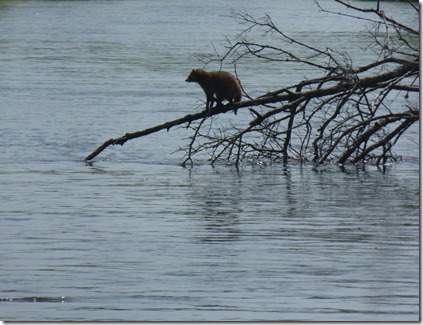 Getting a closer look at the river.

There are several walks and some drives in the preserve.  Also tours led by the Seminoles.  Took one walk on a boardwalk that passes through several vegetation areas along it’s  half mile length and really gives you the feel of being totally surrounded by nature. 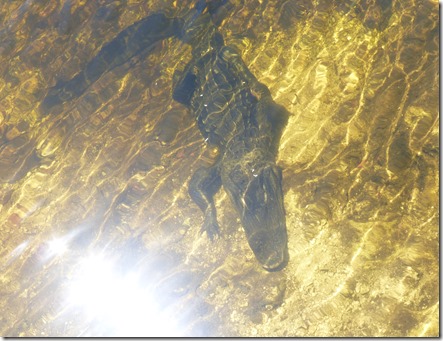 This guy was in canal next to visitor center. 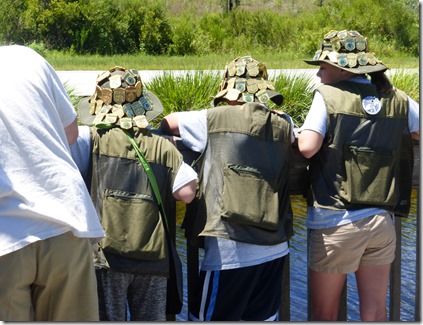 These kids have been doing Jr. Ranger programs all across the US.  Hats and vests were covered with awards from 49 parks and monuments.  Great educational experience! 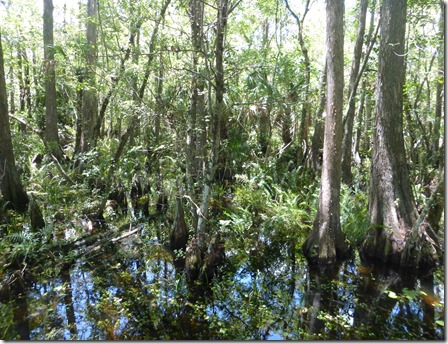 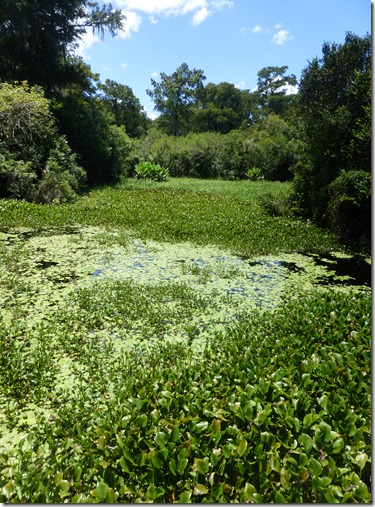