Forecast high in Death Valley, 105 degrees.  We left Las Vegas at 7:30 in the morning.  Fortunately going against morning traffic. Five lane parking lot leading into the city.  Short detour to Costco for gas and then north.  Made it through Death Valley (sea level –) by 11:00 am with temp not too bad – about 85.  Got to Lone Pine about 1:00 pm.  Nice campground. Quiet, FHU, pool AND spa, cable, WIFI, trees, east side of Sierras(Mt Whitney) for view.  Good place to stop for day. 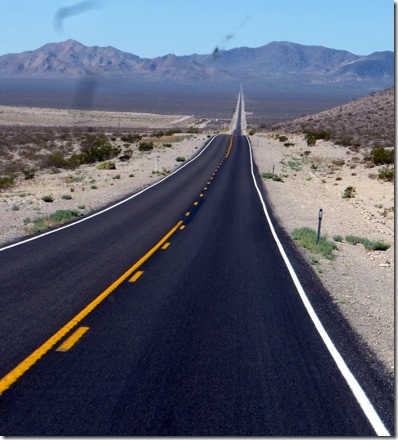 At the end of that long straight road and over those mountains is Death Valley. 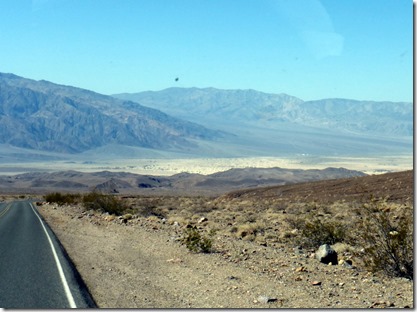 Headed down into Death Valley 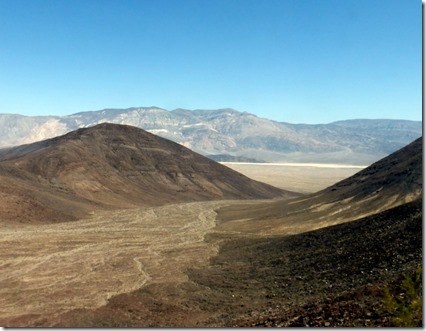 Death Valley from the west 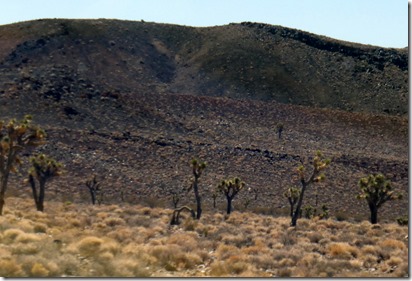 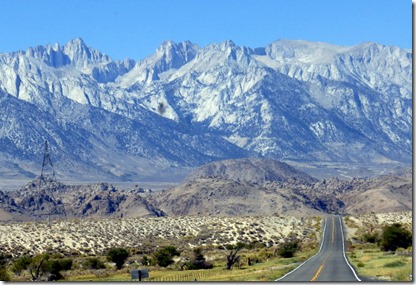 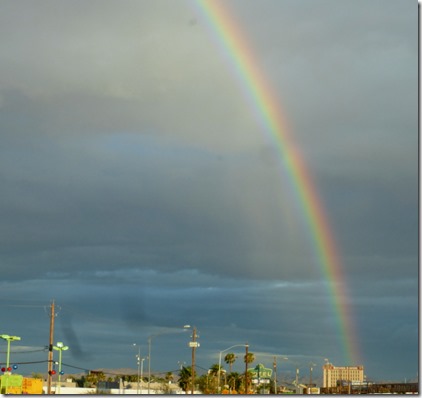 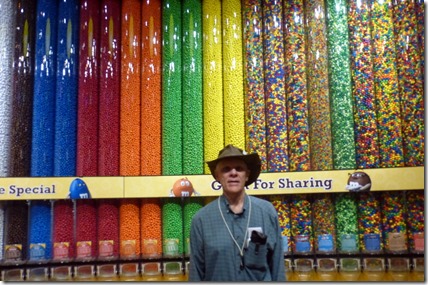 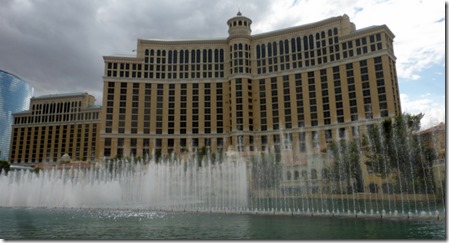 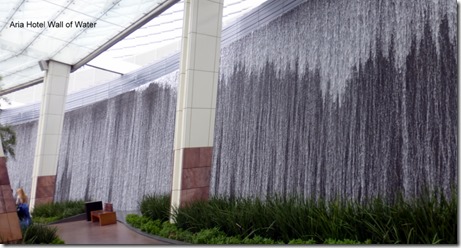 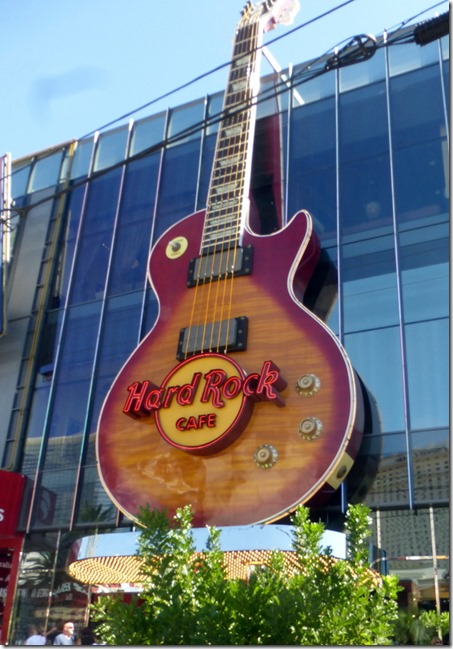 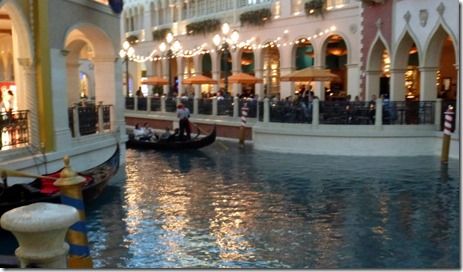 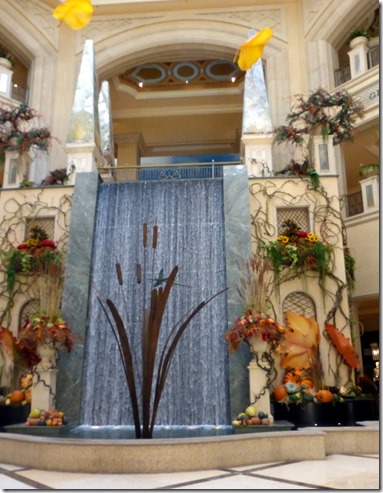 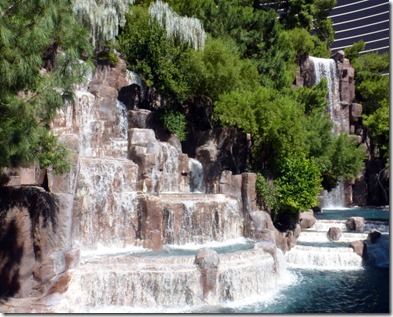 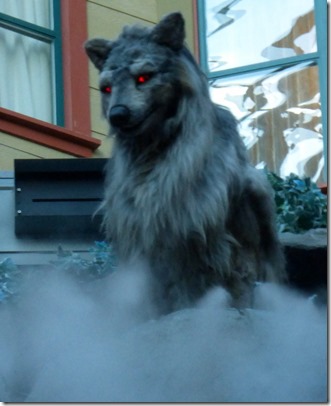 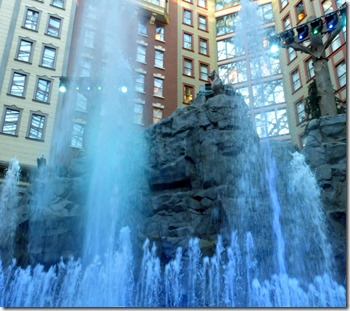 Thunder and lightening and rain Oh My!

Layover in Hurricane.  Drove to St. George to do some sightseeing and shopping. Sunny and clear all day.  Warnings of potential storms 20 miles from us but no sign of them near us.  Clear and sunny over us.  Fifteen minutes ago still clear.  Ten minutes ago a storm moved in.  Lightening and instant thunder – lots of it.  Rain so heavy that gutters running full and visibility about 100’ due to heaviness of rain.  Stuff flashfloods are made of.  Lasted about fifteen minutes and then was gone but fun while it lasted.  Car and carbus got a good washing.

Down off the plateau.  Goodbye trees.  Hello sagebrush.

First stop Pipe Spring National Monument.  Interesting spot that has history going back several hundred years and covering several very different cultures.  Until fairly recent times the sprint was the only source of water for many miles in all directions.  Use of and then control and use of this water played a big part in the development of this part of the southwest.  Park is now like a living history museum of how it functioned when the Mormons had a tithing ranch here.  Active and periodic displays of crop gardens, livestock, and many of the day to day tasks of ranch life in the middle 1800’s.  So central was this location that it had the first telegraph station in southern Utah.  First operator was a 16 year old girl named Eliza Luella Stewart.  She operated the station for three years before she met and married David King Udall. She was  the matriarch of what became a long line  of  Udall's active in state and national government including Stewart Udall, former Secretary of the Interior. 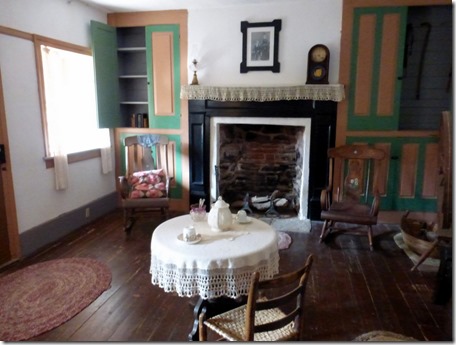 Sitting/living room of ‘ Winsor Fort’ – name given to home/telegraph station/creamery/inn/operations center/hostel/etc. of Mormon family that settled and ranched Pipe Springs. 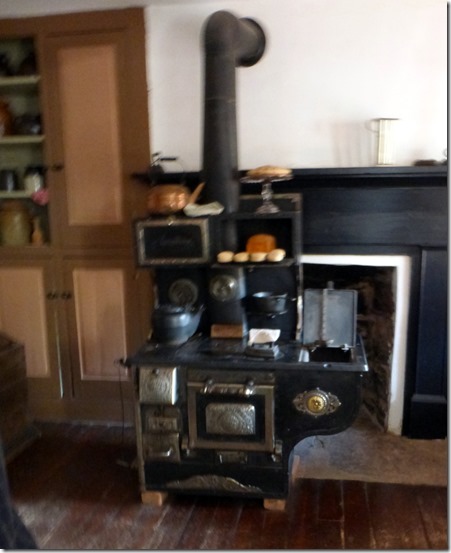 Kitchen.  Stove was a later addition to original house.

On to town of Hurricane.  Park in RV park.  Drive to Zion NP.  An experience.  Last time we were here the park was still open to public traffic.  Some of the vista parking lots might have been a little congested but no inconvenience really.  Now the only travel in the park is on foot or by tram.  Good move.   Have never seen so many parked cars (and inhabitants of same) in one place.  Parking lot of the visitor center is huge, size of parking for a large mall.  It was packed and cars were driving around hoping for a vacant spot to appear.  Parking lots and road sides for a half mile both ways were packed. Nearby town (which has trams to park) was packed.  Summer is over, right?  We lucked out.  We got a spot actually pretty close to the visitor center and tram station.  Took tram through the park, stopping to look and hike at several spots.  At the end of the road a trail leads to the beginning of the Narrows.  A slot canyon through which flows the Virgin River.  You can walk up the narrows for miles wading in the mostly ankle deep river (unless it rains upstream – then LOOK OUT).  Trail to beginning of Narrows is one mile long.  Walking up trail we must have passed at least 300 (probably a lot more) people coming down.  Looking up the Narrows you couldn’t see the river.  There were so many people wading in it.  Kind of like a red rock Disneyland.  Oh well.  We got some pictures (without people even) and saw some neat stuff (again). 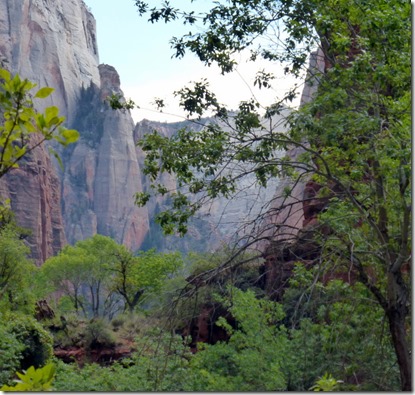 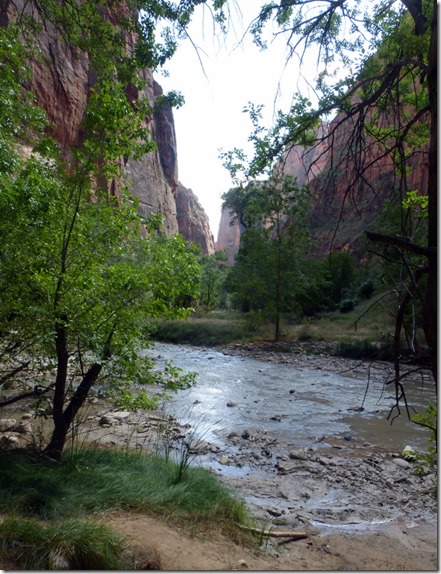 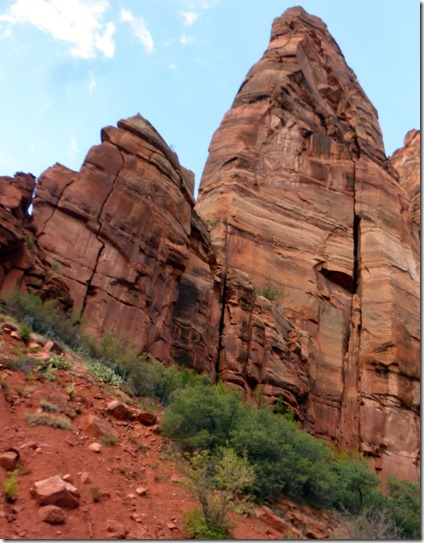 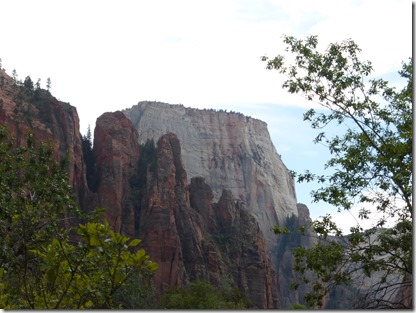 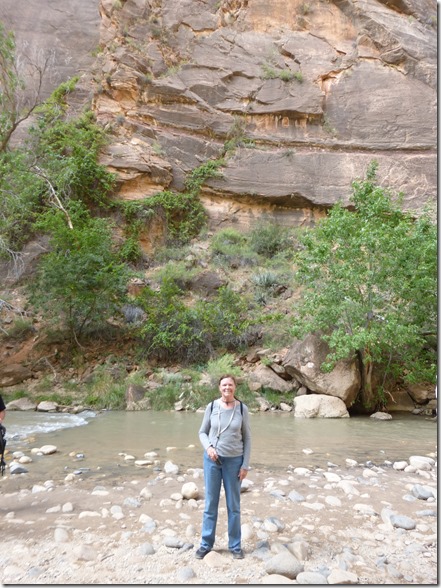 Sue at opening of Narrows. Scores of tourists on either side.