Drove a loop from campground to Atlantic City and then south to Ocean City (NJ) and then back north to campground.

Atlantic City is known for its casinos and boardwalk.  We started at the northern tip of the island and visited the tallest lighthouse in New Jersey. 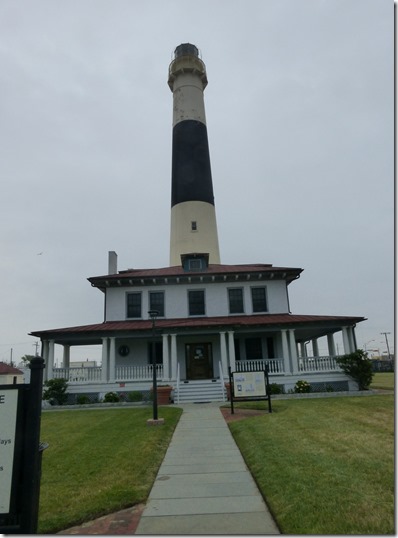 Then south along the street closest to the boardwalk.  All we saw were LOTS of multi-story hotel/casinos with all the gaudiness you would expect.  Not a hint of boardwalk or beach.  A few parking lots with outrageous prices.  No way we could park anywhere near the boardwalk and it looked like it was all casino/hotel anyway.  No public access.  We moved on.

Ocean City (NJ, not MD) was more like it.  Public oriented with lots of locals and tourists making their way to the boardwalk and beach.  Boardwalk is much more public and friendly.  We walked probably two miles along it looking at people and shops.  Unlike Ocean City, Md we saw only one hotel on the boardwalk.  Several amusement parks, mini-golf courses, arcades, souvenir shops, and lots of pizza shops. We spent a while researching seafood restaurants but finally elected to pass.

Back to carbus to finish some maintenance and prepare to move up the coast a ways tomorrow.

Between AC and OC we found this. 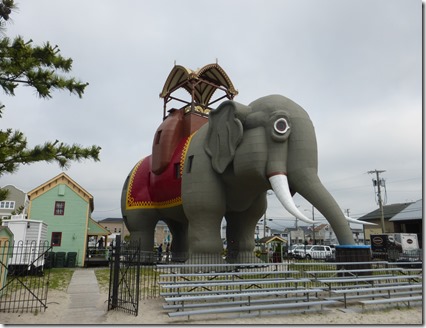 This is Lucy.  She is a National Historic Landmark.

Drove from rural Pennsylvania to New Jersey.  Went by Washington Crossing park.  Spot where Washington crossed Delaware River to defeat British on Christmas.  Quiet pretty area.  Probably not much changed from back in colonial days.

We are now camped in a very nice city park/campground only a couple of miles from Atlantic City.  Beautiful wooded area with huge campsites and full hookups.  There are over 50 sites and there are only two other sites occupied.  And the price is half of what private parks charge.  One of the best finds we have had in all our travels.

We spent the afternoon shopping for a few maintenance items.  (Campground is a rural island in a sea of urbanity)  Battery for watch(after six or eight years it quit

Note:  New Jersey is nicknamed  ‘The Garden State’.  Must be.  We probably saw over twenty nurseries in the sixty miles we drove on New Jersey roads today.

We have been without internet for several days.  We have MIFI backup but don’t want to stream on it and use a lot of data.

The last three days we have been in Delaware.  Camped in a couple of nice state parks.  Mostly just hanging out and getting ready for next week.  Not any sight seeing other than while driving.  Delaware seems to not have a lot of draw items.  We are not much into beach resorts and old forts of moderate notoriety.  Land is pretty flat with mixed farmland and tree/brush cover.  Search on ‘To Do in Delaware’ yields state capitol building as near top draw.  There just isn’t much here.  Sorry if I have offended any Delaware natives.

Drove southeast from Williamsburg to Hampton Va and then south under the James River in a tunnel.  Pretty cool to go under a body of water.  Through Portsmouth and Norfolk and then across the mouth of Chesapeake Bay on a bridge-tunnel.  Really cool.  Much of it is trestled roadway but there are two mile-long tunnels, two high bridges, and four manmade islands along the way.  Fun short cut to what would be a very long go-around. 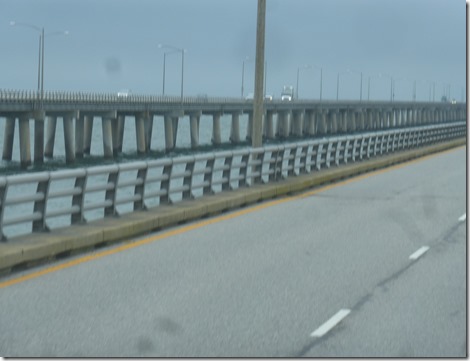 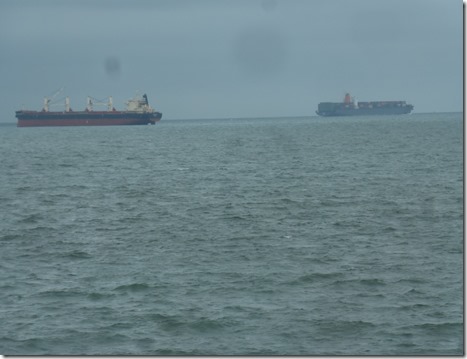 Big boats on ocean side of bridge-tunnel 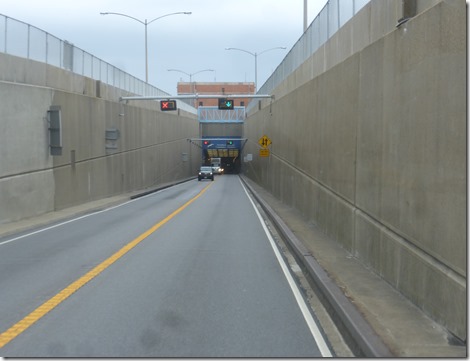 Entrance to one of under sea tunnels 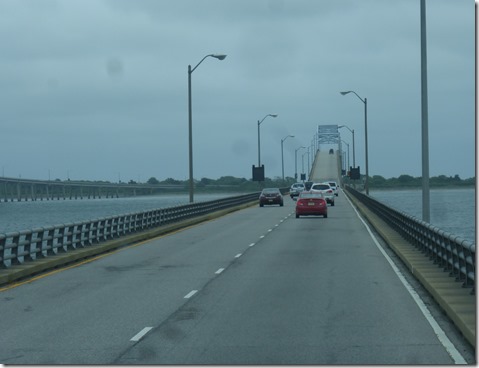 One of the bridges

Back in Virginia and north along the coast to Maryland and then to Assateague Island State Park/National Seashore.  We stayed in the state park.  Very nice.  Quite large but laid out in small loops. Very neat and clean campground with large camp sites. Very large bath house for each loop.  Campground was nearly full but did not feel packed.  Our camp site was just over a barrier dune from the ocean. (See Facebook post of a couple days ago.) 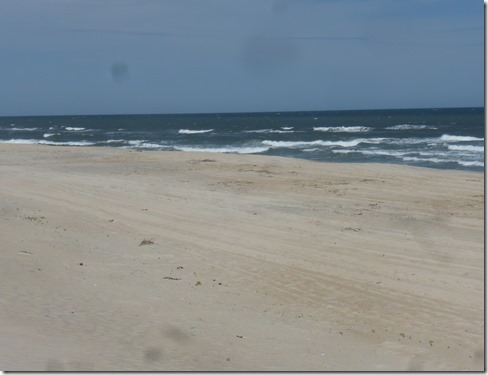 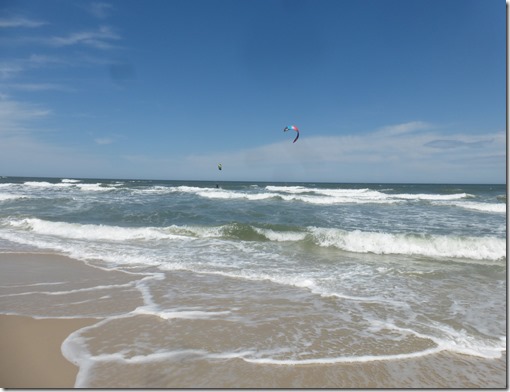 Checked out the National Park campground and were glad we went with the state.  Typical older NP campground.  Small with lots of sites packed in to campground.  Restroom buildings (one per campground) were older and no showers.

Assateague Island and Chincoteague Island, its small neighbor to the south, are the home of the famous wild horses(ponies). We were not sure we might see them because Assateague Island is quite long and the horses are free to roam.  No problem.  Small herd seems to make state park area its home.  At various time there was a herd of about 8-10 horses including one foal roaming around the campground.  Campers were a subject of interest for them.  Looked out the window to a camp site two over from us to see two horses investigating the inside of a large standup tent while the owners were off to the beach.  Had not seen that before. 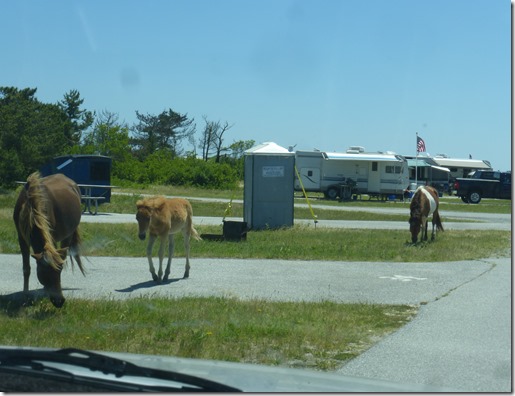 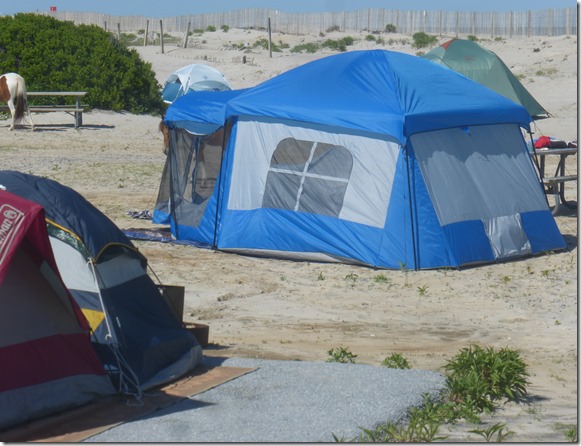 Ocean City.  Interesting.  Two reasons to visit.  One, it is the eastern end of US 50. Had to get picture of sign telling how far to Sacramento to match the one our granddaughter sent us of the western end showing how far to Ocean City. 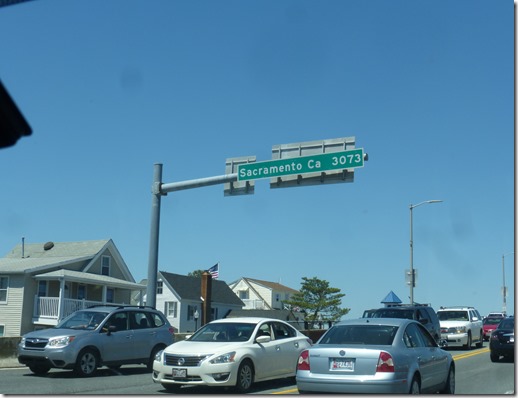 Two, to see the phenomena that is Ocean City.  Picture the Santa Cruz Boardwalk.  Now cram all of Santa Cruz into three streets running parallel to boardwalk. Now stretch that for over 2 1/4 miles and add another 1/2 mile without boardwalk. Boardwalk is three lanes wide the whole way with half of it supplemented with concrete path just as wide.  Large white sand beach on one side with lots of people. The other side is block after block (28+) of shops, restaurants, hotels, arcades, shops, restaurants, hotels, arcades, etc. with no space in between. We went early (9am) and had no problem finding parking in lot a block away.  Twenty minutes later would have been a different story.  Boardwalk was crowded at 9am.  Later –

.  We walked the whole thing from end to end and back looking at people, beaches and shops.  Got in our steps – 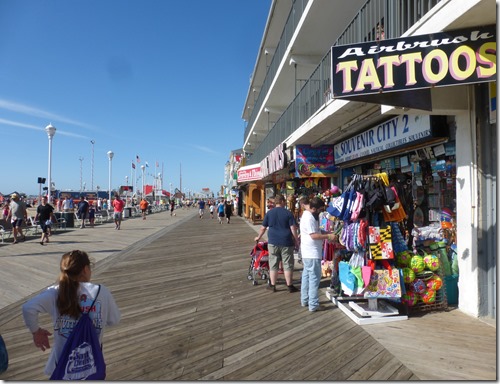 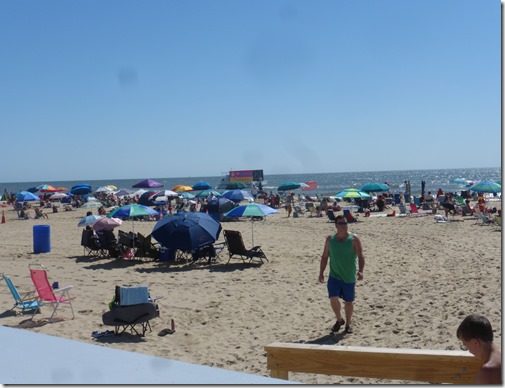 One other side light; there was an air show this weekend that included the Thunderbirds.  Great place for an air show – right along the beach.  Hotels at center of beach had set up tents on beach with chairs under them and were selling space for $30 a seat.  Very long lines to get a spot.  Whole beach near ground zero was packed umbrella to umbrella.  It would have been fun to stay and watch but we opted out.  We left at noon.  There were four cars jockeying for our parking spot when we left.  The road we had breezed in on three hours earlier was three lanes bumper to bumper stopped for almost five miles trying to get into an already full city when we left.  We smiled and went to have a soft shell crap sandwich at a market on the way to the campground.  Interesting.  We can say we have done that.  No need to repeat. 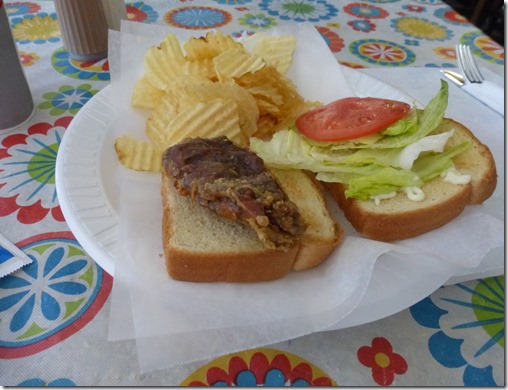